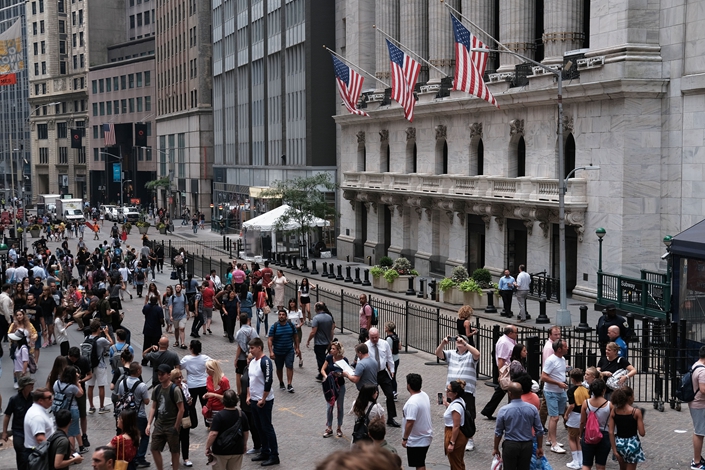 Will the United States suffer a recession in 2020? That’s the central question in American politics. A recession would end the longest recovery in the last century and severely damage President Trump’s re-election prospects. While presidents seldom turn the business cycle on their own, they get the blame for bad times, and the credit for good times. As the United States enters 2020, three forces are battling to shape the economic outlook.

The strongest negative force is a slowing global economy. Europe is sputtering, Germany is in recession, and Brexit chaos is weakening Britain. At 1%, Japanese growth is unsatisfactory but “normal.” China has slowed from well above 6% to somewhat under. Relatively speaking, the U.S. economy, with growth at 2%, looks marginally stronger than its peers. In large part, the U.S. owes its strength to the 2017 Tax Cut and Jobs Act, which slashed the tax burden faced by corporations. Yet weakness abroad will dampen U.S. prospects in 2020, as exports fall and gloom spreads.

The strongest positive force is ultra-low interest rates. Negative yields characterize Japanese and European government bonds. The Federal Reserve cut its benchmark policy rate to under 2%. Any investment project that promises more than 5% return looks worthwhile. Common shares pay a better dividend than Treasury bonds. No prior episode of stalling growth has met this degree of monetary ease. If that were the end of the story, monetary policy might well turn the global economy in a positive direction.

But that’s not the end of the story. Trade wars are the curse of our day, eroding business confidence, raising consumer prices, and casting a pall over the economic outlook. The world economy has lost at least 0.5%, while the U.S. has lost 0.3%. Expressed as percentages the numbers seem small, but in absolute dollars the loss exceeds $500 billion, the size of the entire South African economy. Unless the trade wars end, the loss will be repeated, year after year.

Entering 2017, the world trading system suffered low-grade malaise, as every G-20 country indulged in fresh restrictions, individually small but cumulatively large, despite earnest promises to abstain. The WTO Doha Development Round, which at its birth in 2001 promised global liberalization, had become a corpse waiting to be buried. But in January 2017, everyone wondered whether the trade picture could get worse. Would Trump’s trade bite prove as bad as his bark?

Once in office, President Trump put doubts to rest. First, he withdrew the United States from the Trans-Pacific Partnership. Then he launched trade wars, demanding major concessions from U.S. partners, imposing tariffs reminiscent of the 1930s, and broadcasting hostile tweets almost weekly. In 2018, China responded with high tariffs of its own and Europe threatened likewise, if Trump imposed auto tariffs.

Not only has bilateral U.S. trade with China suffered, but also global trade stalled, and business confidence took a dive worldwide. Now the question is whether President Trump, facing impeachment, will back off his mercantilist trade agenda. The recently signed trade agreement with Japan is a promising step — the first time Trump has cut U.S. tariffs. The exchange of modest concessions with China in the October talks — even if Trump continues to demand all or nothing – would boost business confidence bilaterally and globally. Opening talks with the European Union and the United Kingdom would add more constructive notes, even if nothing can be agreed in 2020.

President Trump can’t stop the impeachment inquiry, now that Speaker Pelosi has unleashed the House of Representatives. Nor can he force Federal Reserve Chairman Powell to inaugurate negative U.S. interest rates, following the European Central Bank and the Bank of Japan. But trade wars are Trump’s to manage. To add insurance against a recession, and advance his own re-election prospects, Trump could surprise us all by turning a new trade leaf in 2020.

Gary Clyde Hufbauer is a nonresident senior fellow at Peterson Institute for International Economics. He was previously the Marcus Wallenberg professor of international finance diplomacy at Georgetown University and deputy assistant secretary for international trade and investment policy of the U.S. Treasury.