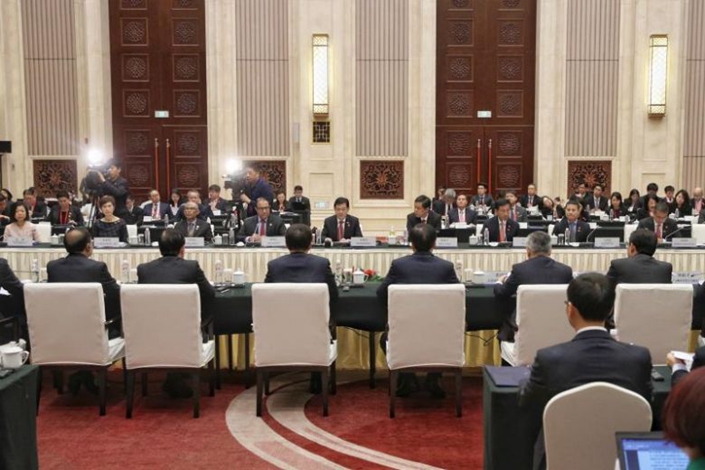 (Straits Times) — Singapore's fourth-generation leadership has a comprehensive plan for engaging with China economically and plugging into the East Asian giant's rapid development.

Ten members of the “4G” cohort drove home this point as they spoke with Singapore media at the end of a bilateral meeting in Chongqing on Tuesday that was of particular significance, as the Singapore team was composed fully of this new generation of political leaders.

Heng, who took over the reins from former DPM Teo Chee Hean earlier this year, said his first meeting in the new role was forward-looking and productive, and that he took the opportunity to “understand China's development priorities and direction in the coming years, and to look at how we can build on these priorities.”

As Singapore transitions to a new political team and the island-state marks 30 years of diplomatic relations with China next year, the vision for this new crew is to build on the foundations of the past decades and “scale new peaks” in its relationship with China, he added.

An emerging area of collaboration is in smart cities, which addresses today's trends of rapid urbanization and digitalization, said Minister for Communications and Information S. Iswaran. On Tuesday, the two countries signed an agreement on a smart cities initiative in Shenzhen.

Another area is the environment, where the two sides are “at the forefront” of joining strength to fight climate change at the international level, said Minister for the Environment and Water Resources Masagos Zulkifli.

That Singapore ministers and officials often visit China shows that the relationship “is not static and monolithic,” said Trade and Industry Minister Chan Chun Sing, and that they are keen to keep pace with China's developments and understand the different priorities of the various provinces as well as the central government.

He outlined three priority areas that Singapore will focus on in its partnership with China: internationalization of the Chinese economy, plugging into the mainland's regional development strategies, and non-physical aspects of the new economy, such as professional services and data flows.

“All these are intangibles but they all play a part in the new economy, and this is also what the Chinese are focused on,” said Chan.

The Guangzhou-Hong Kong-Macau Greater Bay Area economic blueprint holds particular interest, as the ministers spoke about plugging into this master plan with existing projects like the Guangzhou Knowledge City and the new smart city agreement for tech capital Shenzhen.

The mantra of keeping cooperation up-to-date with China's priorities has served the partnership well. Manpower Minister Josephine Teo noted that the Chongqing Connectivity Initiative, the third flagship bilateral project, has been elevated to a strategic national-level project and given high priority, as it catalyzes the development of China's western region, links up the Belt and Road routes, while fulfilling broader economic integration between China and Southeast Asia.

Heng said another important area of cooperation is in capital markets connectivity and the development of a more resilient financial system able to channel capital to productive uses across the different areas.

He recounted how one official had observed on Monday that Singapore was unique because it had many cooperation platforms with China.

“The phrase he used was ‘duyi wu’er’ (unique and unmatched),” he said. “I think this is something that we value, and both sides value, and we'd like to take this forward.”

This story was originally published by the Straits Times