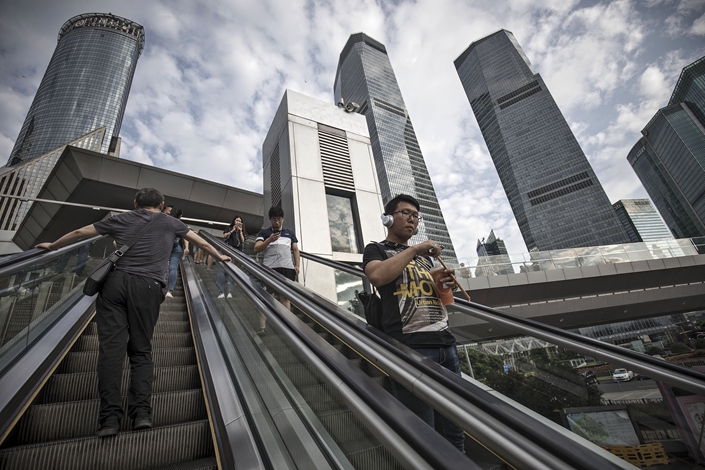 Pedestrians ride an escalator in the Lujiazui Financial District in Shanghai on Sept. 4, 2017. Photo: Bloomberg

(Bloomberg) — China’s deepening economic slowdown and a glut of supply has pushed the nation’s office vacancy rate to the highest since at least 2008.

The vacancy rate in 17 major cities climbed to 21.5% in the third quarter, according to CBRE Group Inc. The “spike” in vacancies this year is the worst since the depths of the global financial crisis a decade ago, said Sam Xie, the firm’s head of research in China.

China’s office market is being buffeted by a confluence of forces, driving vacancy rates to the highest among global business centers. Overseas companies are waiting for an end to hostilities in the U.S. trade war before committing to new leases; skyscrapers built during the boom years are unleashing a wave of supply; and cost-conscious tenants are moving to cheaper buildings as the economy slows.

In Lujiazui on the banks of Shanghai’s Pudong River — one of Asia’s most expensive business districts — vacancy rates reached 16% last quarter, up from about 3% three years earlier, CBRE said.

Among the departures was Mitsubishi UFJ Financial Group Inc., which moved to the New Bund Time Square building in the emerging business zone of Qiantan, where rents are about 50% cheaper than Lujiazui.

In an effort to attract tenants, landlords are offering incentives including longer rent-free periods. Even so, rents declined in 14 of the 17 cities last quarter, including the major hubs of Beijing and Shanghai, CBRE’s Xie said.

In Shenzhen, authorities have offered rent discounts of as much as 50% to attract tenants to Qianhai, an emerging business zone. Nine years after it was established as a future financial-services hub, two-thirds of office space in the area is empty, according to Colliers International Group Inc.