The Wineries Transforming the Tourism Landscape of Dusty Ningxia 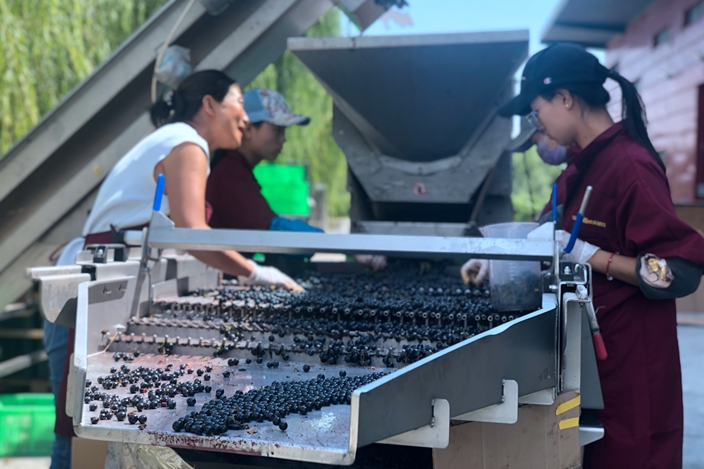 For years, Changyu, Great Wall, and Dynasty — the three major state-owned brands — established the reputation of Chinese wines as alcoholic grape juice. Things are changing, as the country’s vineyards increasingly produce wines that can go toe-to-toe with those from traditional wine-growing heartlands.

As early as 2008, England’s oldest independent wine merchant Berry Brothers & Rudd noted that China’s favorable soil and soaring domestic demand gave it “all the essential ingredients to make fine wine to rival the best of Bordeaux.”

Northwest China's Ningxia Hui autonomous region is one of the country's most promising wine regions. It’s mostly dry and desert-like, economically underdeveloped and known for its coal production. But the wineries opened up by entrepreneurs in recent years are not only changing the region's economic image, but also image as a tourist destination.

Story of a family business

Emma Gao is a rising star in China’s private winery business, which her family got into 12 years ago. They started with her mother’s savings of 300,000 yuan to buy a small plot of land in Ningxia’s capital Yinchuan to plant grapes along with winemaking equipment.

The family’s first winery was located in underground cellar in their courtyard home in Yinchuan. Emma spent most of her time out of Ningxia, including going to France to learn the trade, and ended up working in Shanghai for Spanish winemaker and merchant Torres.

One day, Emma took a bottle of her family’s wine and gave her boss a blind tasting. He took a sip and his eyes lit up. He later visited their winery and saw its potential. In China, he had only seen large-scale wineries, state-owned, or joint ventures, but never family-run affairs. In Europe, family-owned wineries make the best wines. Good grapes take generations to grow. Right then and there he agreed to represent Emma and her family. “Don’t come back to Shanghai, just let me be your dealer instead,” he said.

That evening changed Emma’s life. They made 3,000 bottles that year, and doubled production the next year. But there were headaches galore. For one, the family was mostly dependent on grapes from local farmers. But it was hard to control quality. “Contracts with farmers are useless. They take your deposit, then sell the grapes to others, or they don’t grow the grapes to your specs,” Emma complained. The family began looking for more land. They found it in 2012 in the shadow of the Helanshan Mountains. Today they produce 100,000 bottles a year.

There are now hundreds of wineries around the Helanshan Mountains, and many of the family wineries share a similar story: the fathers started by planting fruit trees to contain the desert, then they realized the extraordinary potential of wine business and set their families on that course.

Emma and other vintners have transformed the area. Back in the day, she recalled, “it was all barren deserts, so hot that nothing could grow. There were no buildings, no trees, only shrubs, the type with tiny thorns.” But the elevation at 1,350 meters is ideal for growing wine. What’s more, the Helanshan Mountains are positioned north to south, so the escarpment blocks the Siberian cold. “The stones and sand washed down and settled here for 100 million years,” Emma noted, “it’s a treasured land with good feng shui.”

Later that evening, we met up with Emma in downtown Yinchuan at a Wine Culture Center that her winery is building “Here will be the tasting room where our local winemakers will taste the best wines of the world. Over there will be eight hotel rooms, where guests can stay.” Emma gestured around the shells of the building, willing us to see what she saw with her enthusiasm, great wine gatherings and a bright future of wine tourism.

Compared to wine tourism in South Africa or Napa and Sonoma in California, Ningxia has a ways to go.

For one, there isn’t yet an official or organized effort to promote wine tourism in Ningxia. For example, a map of all the wineries with their contacts and addresses would be helpful, but we don’t have that yet.

If you want to visit, I highly recommend doing some homework ahead of time to decide which wineries to visit, and call ahead to make appointments. Otherwise, it can be a bit hit and miss. Even with an appointment, things here don’t always come out as expected. When we arrived at Legacy Peak Vineyard for our appointment with the owner Liu Hai, we found him gone for the day. However, his 70-year-old father received us and was quite entertaining and extremely hospitable. A sense of adventure definitely makes these kinds of off-the-beaten-path trips more enjoyable.

The wineries are also still learning to offer wine tasting as an experience. Many of the staff who guide you through tasting of multiple wines don’t actually seem to like the taste of wine. At Legacy Peak, I was lucky to run into Guo Ying, a sommelier from Shanghai. She took a sip of Legacy Peak’s cabernet, swirled it around in her mouth, spat into a glass pitcher and said, “There are plums, sweet plums, cinnamon, cloves, black chocolate, a little bit of mint. Very clear layers of taste.” I turned to the 23-year-old member of staff and asked for her opinion. “It tasty ‘puckery’ to me,” she said while her face turned red.

Now on logistics, there isn’t much to see in Ningxia’s capital city of Yinchuan, and that’s probably why the hotels here are great bargains. The Kempinski and Hyatt Place are the top hotels here, and they cost a whopping $70 to $80 a night. The question is: Why stay when you can get out into the desert?

The only place in Ningxia I would go after tasting wines is the small city of Zhongwei, three hours southwest by car from Helanshan. Xia Yuqing, a successful hotelier, has built a cluster of handsome B&Bs on Zhongwei’s outskirts. They resemble a Moroccan camp in the desert, sandwiched between the Yellow River and a stretch of ancient Great Wall. The concrete walls are sand-colored to mimic local rammed-earth construction. Interiors are modern and clean-lined, with white puffy duvets on huge mattresses which sit on raised “kang,” a raised platform traditionally made of earth or fired clay in which a fire burns during cold winter months. Young Chinese adventurers and car companies like Audi have already found their way here, enticed by the stunning photography of desert lunches and romantic dinners by the river. These luxuries come at a handsome price ranging from $200 to $300 a night.

The combination of the wineries and these B&Bs are turning Ningxia from a barren desert into an intriguing and exciting destination. Once the high-speed rail from Yinchuan to Beijing is completed in 2022, Emma’s vision for the region will become reality.

A previous version of this story mistated the location of the Silver Heights Vineyard.