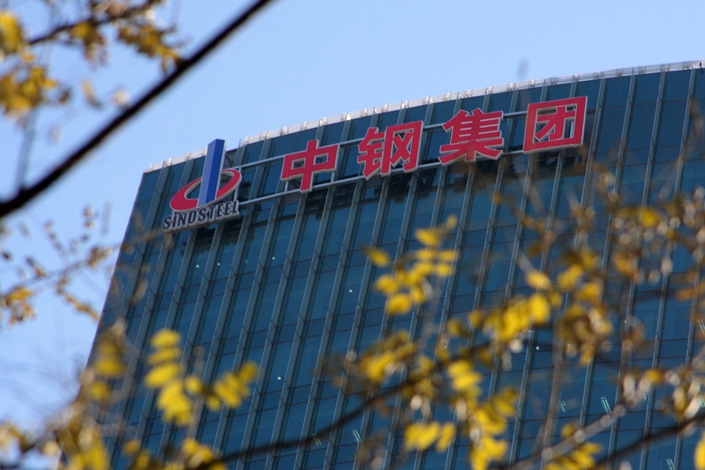 View of the headquaters of Sinosteel in Beijing on Dec. 6, 2017. Photo: VCG

(AFR) — A Chinese state-owned entity will seek to revive a A$9.7 billion ($6.6 billion) mining rail and port project in Western Australia (WA), in a move that could unlock the nation's next iron ore export province.

Sinosteel has acquired Japanese giant Mitsubishi's interests in the long-stalled Oakajee Port and Rail project, in a deal that comes in the strongest year for iron ore prices since 2014.

The acquisition effectively resolves a dispute over port tariffs that was the major wrecker of attempts to develop Oakajee during the heady peaks of the iron ore boom in 2011, and when combined with Sinosteel's existing assets nearby, make the Chinese company the dominant force in the mid-west region of WA.

Attempts to develop Oakajee and unlock an iron ore province to rival the Pilbara region have been under way for 46 years, but it rose to national prominence around 2011 after becoming a pet project of Colin Barnett's Liberal state government.

Sinosteel's A$2 billion Weld Range iron ore project was set to be a major customer of Oakajee, but cost blowouts on the port and rail forced up the proposed port tariffs, prompting Sinosteel to halt work on Weld Range in June 2011.

According to internal emails leaked from Sinosteel in 2011, the Chinese company believed that port tariffs proposed by Oakajee Port and Rail Pty. Ltd. would have rendered the Weld Range project “economically unviable.”

Mitsubishi loomed as the project's savior when it paid A$325 million for the 50% of Oakajee that it did not already own in November 2011.

But iron ore prices had begun their long retreat by that time, and the confluence of factors meant Oakajee was never built.

Last week's deal means Sinosteel will control both the port tariffs and the Weld Range mine, not to mention other iron ore assets in the region, if Oakajee's port and rail assets are ever built.

Sinosteel confirmed the acquisition when approached by The Australian Financial Review, but has not stated any current plans to construct the deep-water port at Oakajee, nor the 570-kilometer network of railways that were going to connect it to the iron ore mines.

The Australian Financial Review revealed in July 2018 that Mitsubishi was close to selling the assets, and documents filed with the Australian Securities and Investments Commission last week show that two Sinosteel subsidiaries are the buyers.

The documents suggest two Sinosteel subsidiaries paid the peppercorn price of A$3 each for their respective 50% stakes in Oakajee Port and Rail, the company that owns the studies and intellectual property for the Oakajee railway network and deep-water port.

One of the Sinosteel subsidiaries was also transferred all shares in Crosslands Resources, the company that had tenure over the nearby A$3.7 billion Jack Hills iron ore project.

Crosslands is reliant on Oakajee Port and Rail building A$6 billion worth of port and rail infrastructure to get its product to market.

ASIC documents say Crosslands was sold for A$0.

It is understood the transaction has been through a lengthy process with the Australian government's Foreign Investment Review Board.

Aside from Weld Range, Sinosteel owns the Blue Hills iron ore mine in the mid-west, which operated for two years before being shuttered in May 2015.

While some high-grade iron ore exists in the mid-west, much of the resources in the region have iron content below the 62% level that has become the industry benchmark.

A significant amount of iron ore in the mid-west is lower grade magnetite, which requires expensive processing to be turned into a saleable concentrate with iron grades of between 65% and 70%.

The energy intensive processing stage has made magnetite concentrate largely unviable in WA over the past decade, but there are signs that might be changing, particularly given the trend for Chinese steel mills to seek higher grade, higher quality raw materials.

Fortescue committed $1.84 billion in April toward the Iron Bridge magnetite joint venture with the Chinese mainland's Baowu and Taiwan's Formosa, which will build a $2.6 billion magnetite concentrate project in WA's Pilbara region.

Iron Bridge's concentrate will have iron grades of 67%, and Fortescue expects to be shipping the first concentrate from Iron Bridge before June 30, 2022.

Asked earlier this month why she believed Fortescue could profitably make magnetite concentrate in WA given rivals like Ansteel and Citic had struggled to be profitable for much of the past decade, Fortescue boss Elizabeth Gaines said Iron Bridge would be “far more energy efficient” than its predecessors.

“We have applied different innovation to magnetite processing and we have been able to prove it by spending A$500 million on a full-scale pilot and demonstration plant,” she said on Oct. 10 on the sidelines of the Melbourne Mining Club.

"I think the other projects that were developed, I don't have their specifics, but they didn't go down the path of doing a stage one, full-scale pilot plant and demonstration plant.

"We have actually proven the technology, we know it is more energy efficient and we have applied some innovation to the processing and so we have a high degree of confidence that it will be successful and profitable."

Gaines said Fortescue had not finalized its plans for how Iron Bridge's energy needs would be met.

“It is less about the source of generation. It is the absolute amount of energy, it is a 220-megawatt energy requirement. That compares to a similar project in Western Australia which is 450 megawatts, so that is the energy efficiency," she said.

Once fully ramped up, Iron Bridge is expected to produce 22 million wet tons of iron ore a year, which is the equivalent of about 20 million tons of conventional iron ore exports.

Sinosteel has not floated any magnetite concentrate plans for Oakajee, and in the immediate future the company is expected to focus on its existing iron ore mines in the region, which are conventional "direct shipping ore" mines extracting hematite iron ore.