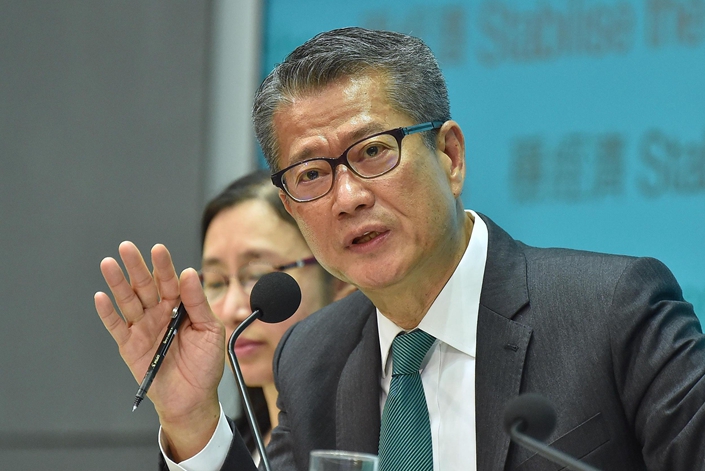 Last week, I traveled to international conferences overseas twice. The first time was to the Asia-Pacific Economic Cooperation (APEC) Finance Ministers’ Meeting in Santiago, Chile, and the second was to the annual meetings of the International Monetary Fund (IMF) and the World Bank Group as a member of the Chinese delegation in Washington. During my stay, which included a stopover in New York, I met with government and Federal Reserve officials, representatives of think tanks and credit rating agencies, as well as fund managers and key players in the business community to share views on the macroeconomy and the financial market, and brief them on the current situation of Hong Kong.

From the meetings, there was a consensus among the IMF and representatives of the business and investment sectors that the global economy has been undergoing a synchronized slowdown. The pressure for an economic downturn will be even greater if trade conflicts and geopolitical tensions escalate.

Due to the uncertainties ahead, the IMF announced earlier in the World Economic Outlook that it would lower the global growth forecast of the current year and the next. Global growth for this year is expected to be 3%, which is the lowest in the decade and a 0.2 percent point downward revision from July’s forecast. This is the fifth time for the IMF to lower its forecast on global economic growth. The total adjustment so far is 0.9 percent points downward. The growth forecast for 2020 is 3.4%, which is a 0.1 percent point downward revision.

Facing this rigorous moment, government officials and business people from different economies were encouraged by the positive progress recently seen in the trade negotiations between China and the U.S., and they looked forward to concrete results from the talks.

The IMF pointed out that, to tackle economic uncertainties, around 70% of global economies have been easing monetary policy. It also advised economies to implement appropriate macroeconomic strategies and expansionary financial policies, in particular enhancing investments in human resources and infrastructure, so as to avoid deflation and falling into a prolonged recession.

In fact, this aligns with the government of the Hong Kong Special Administrative Region’s notion of launching timely counter-cyclical measures to counter the impact of the current downside wave of the global economy.

In mid-August, we announced a series of measures worth about $19.1 billion. Together with the one-off relief measures announced in the 2019-20 budget, which cost $42.9 billion, the $62 billion in total measures are expected to give a 2% boost to our economy. In addition, we will expedite the implementation of minor works projects to create more job opportunities. In light of the economic downturn and local unrest, Hong Kong’s economy, especially the transportation, logistics, tourism, retail and catering sectors have been hard hit. We are therefore formulating the third round of relief measures, in hopes of reducing pressure of the relevant sectors.

To alleviate the financing pressure on enterprises — in particular small and midsize enterprises (SMEs) — we have called on banks to be more compassionate and provide their full support to SME borrowers while complying with their credit policies and risk management principles. The Hong Kong Monetary Authority (HKMA) has recently established the Banking Sector SME Lending Coordination Mechanism, and the banking sector provided positive feedback at the first meeting conducted last week. Moreover, the HKMA has reduced the counter-cyclical capital buffer ratio to 2% from 2.5%, which allows banks to release the capital buffer built up in the past. Through this, it is expected that around $200 billion to $300 billion of additional funding can be provided for lending.

All the people I have met during the trip were very concerned about the current situation and development of Hong Kong. They were particularly concerned about the safety of Hong Kong as we have been a very safe city for years, but blockage and vandalism of the airport and railways as well as violent acts on streets have kept happening over the past few months.

Many of the business people said that they did believe that the unique position and advantages of Hong Kong offer numerous investment and development opportunities. However, they worried about the violent acts and damage to infrastructure, which led them to defer investment plans.

At my meetings with them, I provided an update on Hong Kong’s current situation, the government’s determination to stop the violence, our commitment to safeguarding the free flow of capital within, into and out of Hong Kong, as well as ensuring the comprehensive and effective implementation of the “one country, two systems” principle. Hong Kong’s institutional strengths and core competitiveness are still intact and widely recognized by many international agencies. Although their confidence remains, the persistent social unrest and violent attacks have caused them to worry about Hong Kong’s prospects. They stated that if the current situation continues, they would have no choice but to consider other alternatives to plan for the worst.

Paul Chan Mo-po is the financial secretary of Hong Kong. This article was first published on Hong Kong’s government website.