The Single Mothers Who Can't Get Maternity Leave 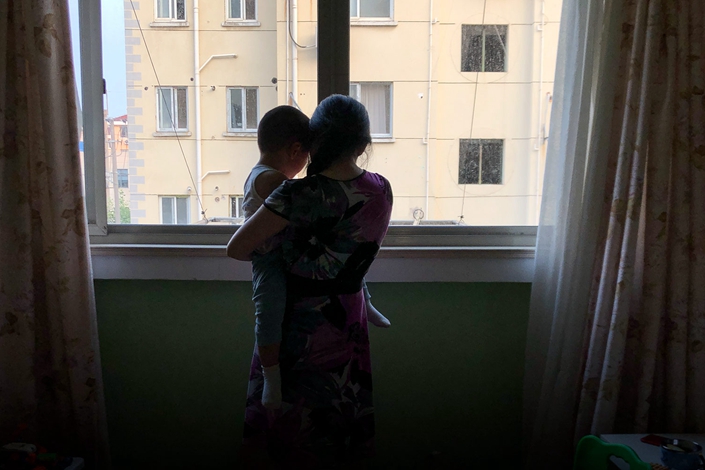 Zou Xiaoqi holds her son at her home in Shanghai on July 20. Photo: Fu Danni/Sixth Tone

(Sixth Tone) — Soon after she broke up with her boyfriend in 2016, Zou Xiaoqi discovered she was pregnant. She decided to have the baby on her own.

“Although I’m not against marriage, I feel that to get married, you have to have sufficient reason to be together,” 43-year-old Zou tells Sixth Tone. “I have never thought it right to get married for the sake of having a child. Marriage and children should not be tied together.”

Zou knew that she’d have to contend with social stigma against single mothers — but she didn’t know she would end up in a years-long legal battle with local authorities.

In China, maternity entitlements are part of a wider system of social security insurance: All employers must make insurance contributions as set by the state, and then the state social security organization pays benefits to eligible employees, such as maternity leave payments and medical subsidies. Zou knew that her company, a travel agency in Shanghai, paid her insurance.

However, when she went to apply for her maternity entitlements at the local social insurance center, she was told that she wasn’t eligible, because she didn’t have a marriage certificate and a family planning permit. Zou estimates she should have been paid around 50,000 yuan ($7,000) for her five months on maternity leave.

While Zou says she is not struggling financially, the loss of paid maternity leave compounds the economic hardships that many single mothers face. In May 2017, Zou sued the local authorities in what was reported as the first case of an unmarried mother suing for maternity insurance entitlements, but she lost. According to the judge’s report, which Zou received in February, only women who give birth in accordance with state family planning regulations are entitled to maternity payments and subsidies. Zou is now appealing the decision.

Her son is now 2 years old. On the weekend after Zou submitted her appeal application, several other single mothers and their children came to visit. While the women shared their sorrows, the kids immersed themselves in their toys.

For Zou, the struggle extends beyond herself and her son, and even the compensation. She wants to fight for the rights of all unmarried mothers — for an unmarried woman’s right to choose.

“I know this is my right. They cannot say that a woman who gets pregnant must get married or have an abortion,” Zou says.

Zou considers herself an independent woman with a positive outlook — a problem-solver. In the very beginning of her pregnancy, she did her research and found that China’s national law does not contain any article that explicitly restricts the reproductive rights of unmarried women. In fact, on paper, children who are born out of wedlock are supposed to be guaranteed equal rights.

But it’s a different story on the ground: Zou encountered plenty of hurdles throughout her pregnancy as low-level administrative staff didn’t know what to do with her. For example, when she visited her neighborhood committee to register her pregnancy, which is needed for a hospital to open a reproductive health file, the committee representative rejected her because she was afraid that Zou’s unusual situation would reflect poorly on her work performance — though in the end, Zou got the registration.

When it came to maternity insurance, the court ruled that Shanghai’s social insurance center wasn’t wrong to demand a family planning permit, citing Article 16 of China’s marriage law, which states that “both husband and wife shall have the duty to practice family planning.”

In 2018, the Procuratorate Daily reported that the first draft of China’s civil code, which aims to combine several items of legislation by 2020, will not include family planning policies that are currently part of the marriage law.

Beijing-based marriage lawyer Duan Fengli commented that the marriage law was too conservative to meet the needs of today’s society, in which marriage and family have become decoupled — there are more married couples choosing to remain childless as well as more single parents.

Unmarried mothers, Zou says, are a vulnerable group. “No one recognizes them, their families don’t understand, social tolerance isn’t good, and even they themselves don’t feel confident,” she says.

Zou, at least, was lucky to have the support of her family. Her brother rented his apartment to her, and it’s just upstairs from their parents, who often come to help take care of her son. Many other parents are less understanding. Zou says that some push their daughters to get an abortion or send the child to the father.

One of the guests at Zou’s gathering was a 31-year-old woman surnamed Li, who comes from a village in Central China’s Henan province. She studied hard to get into a good university in Shanghai and then stayed on to work in the city. She tells Sixth Tone that her parents were always so proud of her achievements, but now they’re heartbroken that she’s had a child out of wedlock.

At first, her father did not want her to keep the child and suggested that she give it up for adoption. Without her family’s support, Li employed a maternity nurse, who also suggested that she “sell” the baby when she found out Li was single. “Their mindset is too traditional. They think having a baby is undesirable for a single mother,” Li says.

Li insisted on her decision and took care of her child herself, but between work and her infant, she was exhausted. Eventually, her mother saw her stress and came to Shanghai to help her out. Slowly, Li’s parents have come to accept the situation, and now the baby is living with them in Henan — but they still conceal the truth from other relatives.

Like Zou, Li was unable to access maternity allowance, though her employer had paid the insurance. However, she won the sympathy of two female managers in her company who were unmarried and childless. “They felt there was a lack of human rights protection in this area,” Li says. The company gave her extra money in her end-of-year bonus.

Li met Zou through a chat group called Future Mommy that Zou started on messaging app WeChat earlier this year. More than 50 members use the group to share their stories, troubles, and doubts, as well as legal advice and information on the regulations in each province. “I learned a lot (about our legal rights),” Li tells Sixth Tone. “She (Zou) did a good job. I told her I will follow her; I will protect my rights.”

After a nongovernmental organization shared Zou’s story in July, a dozen single mothers approached the NGO for information on maternity insurance. In South China’s Guangdong province, where family planning regulations were changed in 2017 after disputes about reproductive rights after remarriage, one unmarried mother reportedly successfully applied for maternity insurance entitlements in August.

These successes will not necessarily influence the outcome of the case in Shanghai, however, as China is not a case law country. In addition, Zou’s lawyer Li Jun explains that the Guangdong example may not be considered new evidence, as it took place after the retrial application. But while she believes the case will be hard to win, she thinks the lawsuit will encourage others.

“If more women step forward and more individual cases appear, that could promote changes in laws and policy,” she says.

The highest court in Shanghai has accepted Zou’s appeal, but no date has been set for a trial. Zou doesn’t know whether her labors will bear fruit.

Despite the difficulties she’s experienced, Zou has no regrets. She’s delighted to be the mother of a curious, wide-eyed toddler, and she’s glad she decided to go it alone. Recently, she took her son on a vacation to the tropical southern province of Hainan, and the little boy enjoyed seeing the ocean for the first time.

She also takes pride in paving the way for other women — as one online comment on her story said: “Wow, it might be my future.”