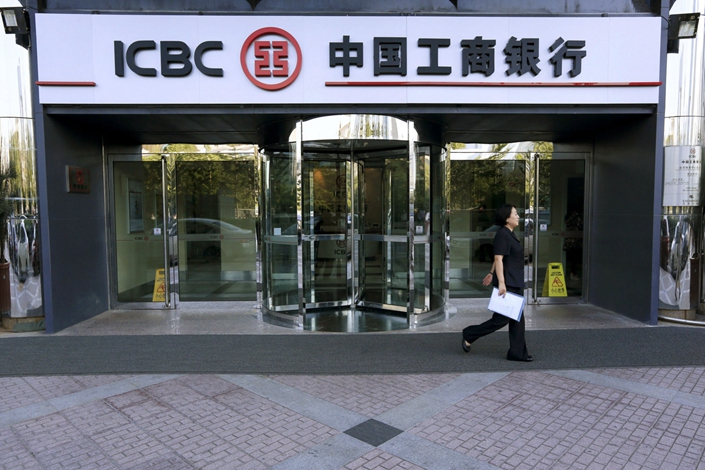 A woman walks past a branch of the Industrial & Commercial Bank of China (ICBC) in Beijing on Aug. 22, 2012. Photo: Bloomberg

The results come as the Chinese economy expanded at the slowest pace since the early 1990s and the trade war spills into new areas including finance. The outlook remains challenging as efforts to boost growth and help struggling small businesses threaten to squeeze margins and lead to a pileup of bad debt.

Chinese banks reported 2.2 trillion yuan of nonperforming loans at the end of June, the highest in at least 15 years, according to the regulator. Xiao Yuanqi, its chief risk officer, said last week that the industry is particularly vulnerable to bad debts and that authorities are working to ensure banks report the true value of nonperforming advances.

China recently revamped its system of interest rates to make them more market-oriented. The new market benchmark, the Loan Prime Rate, will be determined by submissions from a panel of 18 lenders rather than set by the central bank. In the short term, that may mean thinner margins as demand for credit in a slowing economy lessens.

Shares of the top four banks have lost an average 3.6% in Hong Kong this year, trailing the benchmark Hang Seng Index and sending their valuations to near-record lows.

Earnings highlights for the third quarter:

• Industrial and Commercial Bank of China’s profit increased 5.8% to 83.8 billion yuan. Its bad-loan ratio fell a fraction from the end of 2018 to 1.44%, while its bad-loan provision ratio increased 22 percentage points to 198%

• Agricultural Bank of China’s profit increased 6.1% to 59.2 billion yuan; bad loan ratio decreased slightly from end 2018 to 1.42%; provisions for nonperforming loans increased 29 percentage points from the end of 2018 to 281%