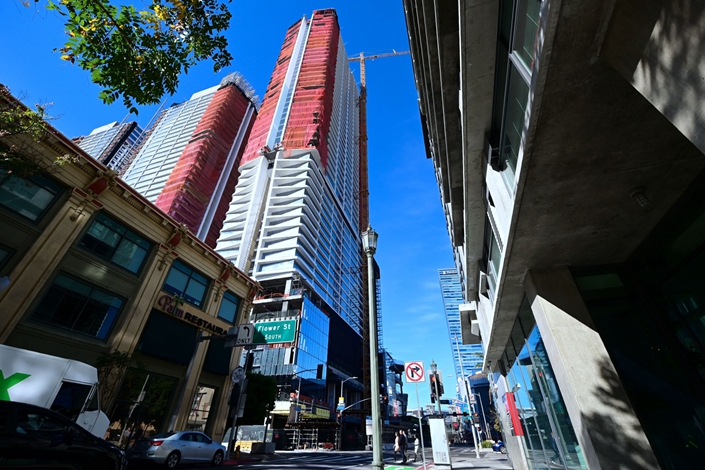 (Bloomberg) — It’s meant to be one of the crown jewels of downtown Los Angeles’ urban renaissance but now it’s in limbo, plagued by lawsuits from subcontractors and victim of an ongoing trade dispute between China and the U.S. and a Beijing crackdown on credit and capital flight.

Construction has largely stalled at the three towers of Oceanwide Plaza across from Staples Center where the NBA’s Lakers and Clippers and the NHL’s Kings play their home games.

On a recent Friday afternoon, no workers or vehicles entered the construction site, which takes up a city block and towers over Figueroa Street. A few security guards manning an entrance insisted that work was going on, yet no activity was visible from the outside.

The developer, Beijing-based Oceanwide Holdings Co. Ltd., offered few details on the future of the $1 billion-plus project — other than to insist that it has financing and work is continuing. The lawsuits by unpaid subcontractors, on the other hand, give a glimpse of the developer’s struggle to come up with needed money to finish the project.

As a trade war between the U.S. and China approaches its second anniversary in January, Beijing is making it tougher to shift money abroad, having imposed capital controls last year to help stabilize its currency. Those restrictions have meant that Chinese direct investment in the U.S. real estate and hospitality sectors plummeted to $377 million last year from a high of $17.3 billion in 2016, according to data from Rhodium Group LLC.

“It appears they wanted to self-fund the entire project,” Dale Ortmann, an attorney representing two of the Oceanwide subcontractors, said of the China-based company. “Now, with the changes in Chinese government policy, the owner is trying to find a traditional construction loan while in the middle of construction.”

And that’s tough. Under California law, all subcontractors’ claims over unpaid invoices, no matter when they performed work on the project, will have priority over any liens a subsequent lender may have, according to Adam Salis, a lawyer in Mission Viejo, California, who specializes in real estate. That’s why construction lenders usually will only get involved before work has started on a project.

With economic growth slowing last year, China tightened restrictions on capital outflows after Chinese companies had gone on a years-long global buying and building spree. Over-leveraged conglomerates such as Dalian Wanda Group Co. Ltd. and Anbang Insurance Group Co. Ltd. were forced to liquidate overseas real-estate worth billions of dollars, and developers were no longer able to finance their projects abroad with money from home.

“The capital outflow control has been strictly enforced by the Chinese government so far this year due to the intensifying U.S.-China trade war,” said Patrick Wong, a Bloomberg Intelligence analyst based in Hong Kong.

Oceanwide Plaza is part of a building boom that has been transforming downtown Los Angeles in recent years. Whereas for decades the city’s historic core had been a ghost town at night, the 21st Century has brought in an influx of young professionals seeking an alternative to the suburban, car-dependent Southern California lifestyle.

The number of market-rate apartments has increased by more than tenfold, from 2,426 before 1999 to 27,616 as of the second quarter of this year, with another 3,296 under construction, according to data from the Downtown Center Business Improvement District. The number of condos during this period rose from 829 to 6,760, with 1,839 under construction.

In the South Park area of downtown, around the Staples Center, developers including Philip Anschutz’s AEG, Shanghai-based Greenland Holding Group Co. and Hankey Investment Co. have gone to town to transform the skyline with gleaming towers — hotels, luxury condominiums and apartments.

Oceanwide Plaza’s contribution to this new hub of high-end living is to include the first Park Hyatt on the West Coast. The project’s tallest tower at 604 feet is to include the 184-room hotel and 164 hotel-serviced residences. Two adjacent towers hold another 340 condominiums.

The development is also to feature a 700-foot LED ribbon wrapping around the building, 153,000 square foot of retail space and a two-acre sky park.

In downtown San Francisco, Oceanwide halted construction this month on one of the two towers of a mixed-use development. The 54-story tower is to house a Waldorf Astoria hotel, a Hilton Worldwide Holdings Inc. property. Hilton’s CEO Christopher Nassetta said on an Oct. 22 earnings call that the company had been aware of Oceanwide’s liquidity problems.

“It became public this week, but we’ve known about that for the better part of a year,” Nassetta said.

In April 2018, the company announced that it had topped off the three L.A. towers and that the development would be completed this year. But in January, work was suspended. Since then, construction has proceeded at a reduced pace and at least half a dozen subcontractors have gone to court over unpaid work.

An Oceanwide spokesman in Beijing said that the L.A. project is still under construction, and that the company still has access to development loans.

The company said that in light of local market changes and economic uncertainties, a “realignment of the work” on the San Francisco project, known as Oceanwide Center, was necessary to keep the project sustainable. Oceanwide offered no further detail.

There’s still strong demand for unique properties, according to Sampaio, particularly in the Arts District, the old industrial neighborhood on the side of downtown where Warner Music Group this year moved into a former Ford factory. But the influx of Chinese investment that helped inflate real estate assets from Vancouver to Sydney is abating.

“A few years back we had a lot of Chinese buyers but that has slowed down,” Sampaio said. “There’s more inventory now and buyers are postponing making a decision.”

In court, the company failed to have the first lawsuit, by Webcor Construction over a $60 million claim, sent to arbitration or to get an order reducing the subcontractor’s lien.

At a hearing Wednesday in state court in Los Angeles, Oceanwide won a reprieve from having to hand over evidence Webcor is seeking in its litigation. Superior Court Judge Richard Rico ruled that discovery would be stayed while Oceanwide appeals his refusal to send the case to arbitration.

In the lawsuits, Webcor and other subcontractors have pointed to what they say is a “suspicious” $325 million deed of trust on Oceanwide Plaza that is held by a group representing Chinese EB-5 visa investors. The EB-5 program provides green cards to overseas investors who create jobs in the U.S.

L.A. Downtown Investment LP, the entity that provided the EB-5 funds, only loaned about $137 million to Oceanwide. In addition, a Downtown Investment executive was sued by the U.S. Securities and Exchange Commission two years ago for defrauding EB-5 investors in a different project. The Oceanwide spokesman in Beijing declined to comment on the EB-5 issue.

It may give lenders pause, said Salis. “Potential lenders will want to know more about who their partners are,” he said.

Webcor can still seek information from Downtown Investment regarding its loan to Oceanwide, William Eliopoulos, a lawyer for the subcontractor said after the hearing Wednesday. The lender is a separate defendant in the lawsuit and the judge’s order staying discovery doesn’t pertain to parties who haven’t filed an appeal, according to Eliopoulos.

Oceanwide said in an April court filing that Webcor’s lien was impeding its efforts to secure money to finish the project. The company said at the time that it had already spent about $860 million and that it was trying to get a loan in two phases: a $275 million bridge loan and a construction loan for the remaining costs. An unidentified lender, according to the company, wouldn’t close on the loans with liens on the project’s title.

“Even if you have a really strong developer, it will be difficult to get a loan after construction has started,” Salis said.