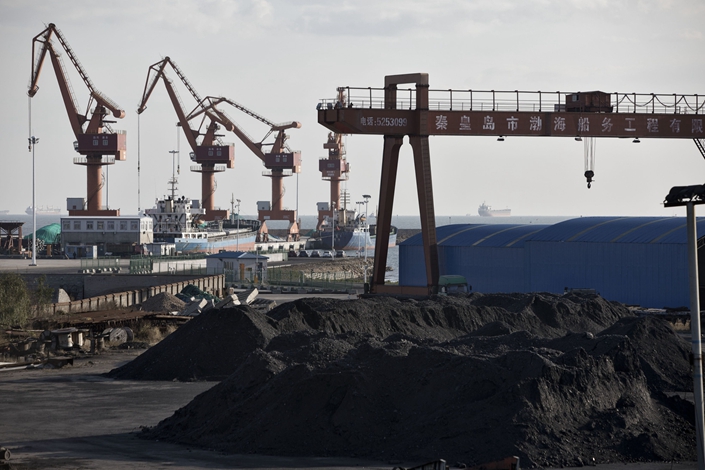 Pies of coal sit near the port facilities in Qinhuangdao, Hebei province, on Oct. 28, 2016. Photo: Bloomberg

(Bloomberg) — China’s coal imports are on track to exceed last year’s tally, confounding predictions that the government would cap purchases at 2018’s levels.

The world’s biggest buyer regularly limits imports to buttress its domestic miners amid a broader campaign to reduce the nation’s reliance on the heavily polluting fuel. What’s changed this year is that a slowing economy and the attraction of cheaper overseas coal are likely to steer policymakers away from a repeat of 2018’s curbs that saw foreign cargoes shut out almost entirely in the last weeks of the year to meet an annual quota.

Coal imports in the first nine months have already raced ahead of last year’s levels by 10%, suggesting it’ll be “difficult to have imports at the same level as last year, while a rise is highly possible,” according to Zeng Hao, an analyst at consultancy Fenwei Energy Information Services. The gain is all the more notable given rising domestic supply.

China halted some coal cargoes at a major port in the summer after imports outpaced 2018 levels. And Australian coal has been subject to a go-slow on customs clearances that some observers have tied to political tensions with Canberra. But with only two months to go before the year is up, the prospect of a strict, nationwide clampdown on overseas purchases is fading fast.

“It’s hard to tighten imports in the last two months,” especially for power companies, said Zhai Yu, a senior consultant at Wood Mackenzie. It normally takes about that time to complete a purchase from contract-signing to delivery, so firms will already have inked deals for overseas coal to be delivered in November and December, according to Zhai. Even the 2018 halt allowed waivers for companies that urgently required fuel to ensure ample power supplies for winter heating.

So, while China may yet halt custom clearances at ports where imports have risen significantly, the restrictions are unlikely to be as stringent as last year’s, Fenwei’s Zeng said. Notice of any curbs will probably be delivered verbally instead of in writing, he added, which may add to uncertainty.

Australia’s Whitehaven Coal Ltd. said last week that the market is now speculating China may allow up to about 300 million tons of imports this year, from 281 million tons in 2018. Still, the winners from a relaxation of policy may be uneven, said Zeng. Suppliers from Indonesia and Mongolia could benefit more than Australian miners, whose relationship with Beijing remains cloudier despite protestations to the contrary from Canberra.

The import growth so far this year is partly due to domestic supply woes after a mine collapse in January in Northwest China’s Shaanxi province, said Ding Yihong, a chief analyst at Huaxi Securities. “Cheaper coal prices abroad have also been driving purchases from China,” he said.

The Australian benchmark for thermal coal has slumped 34% this year to $67.5 a ton. The domestic spot price at Qinhuangdao is down less than 2% to about $80.80 a ton.

A slowing economy due to the trade war with the U.S. is forcing companies to take a hard look at costs, according to WoodMac’s Zhai. And China’s plan to lower electricity prices for industrial and commercial users by 10% this year is adding extra impetus to the search for cheaper fuel.