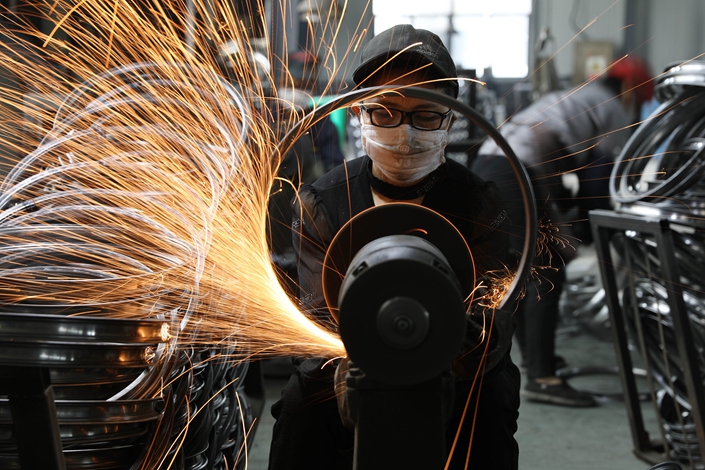 China’s manufacturing activity expanded at the fastest pace in nearly three years in October as output and new orders grew at a clip not seen in several years, a Caixin-sponsored survey showed Friday.

The Caixin China General Manufacturing Purchasing Managers’ Index (PMI), which gives an independent snapshot of the manufacturing sector’s operating conditions, increased to 51.7 in October from 51.4 in the previous month. The reading hasn’t been this high since February 2017.

The Caixin PMI is one of the earliest available monthly indicators of economic conditions in China and is closely watched by investors. A reading of 50 divides expansion from contraction. The higher above 50 the faster the expansion, while the further below 50 the greater the contraction. Manufacturing accounted for nearly 30% of China’s gross domestic product in the first nine months of this year, according to government data (link in Chinese).

“China’s manufacturing economy continued to recover at a relatively quick pace in October,” said Zhong Zhengsheng, director of macroeconomic analysis with consultancy CEBM Group, a subsidiary of Caixin Insight Group. “However, business confidence has been weak.”

The output subindex expanded at the fastest pace since December 2016, while new orders placed with goods producers grew at the quickest clip since January 2013, partly due to improved market conditions and a recovery in customer demand, according to the survey.

New export orders rose for the first time in five months, and the growth rate was the highest since February 2018. The increase was likely due to “the U.S.’ move to exempt more than 400 types of Chinese products from additional tariffs,” Zhong said. “If the improvement in demand, including that generated by infrastructure projects and exports, is able to continue, the manufacturing sector can gradually build a foundation for stability.”

The employment subindex contracted further to the lowest since September 2018. “Lower headcounts were linked to the nonreplacement of voluntary leavers, as well as efforts to contain costs,” according to the survey.

The gauge for input prices inched down from the previous month, although it remained in positive territory. The measure of output prices dipped further into contractionary territory.

The gauge for future output expectations, which measures how optimistic or pessimistic manufacturers are about their production over the next 12 months, rose in October to the highest point since April.

China’s official manufacturing PMI, released by the National Bureau of Statistics on Thursday, fell to 49.3 (link in Chinese) in October, down from September’s reading of 49.8.

The Caixin China General Services Business Activity Index for August, which tracks the country’s services sector, will be released on Tuesday.