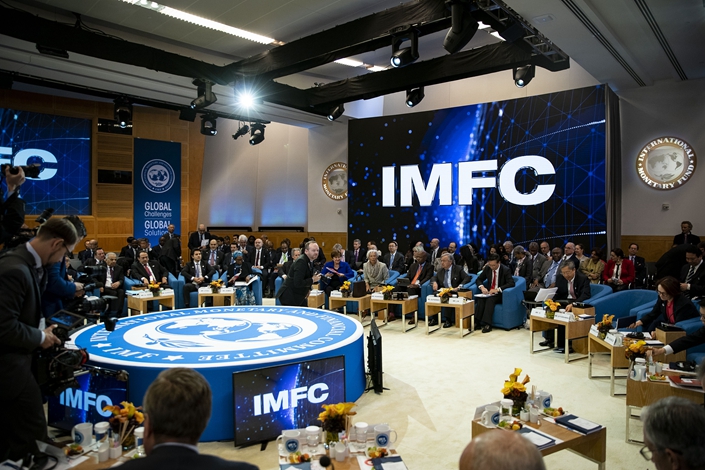 A mood of foreboding dominated this month’s annual meetings of the International Monetary Fund and World Bank in Washington. But fear of a global recession was not the real cause. Although the latest update of the IMF’s World Economic Outlook showed economic activity slowing this year to its weakest level since 2009, the projected global growth rate of 3% is still far above levels associated with past recessions and would be consistent with decent economic conditions in most parts of the world — not a bad outcome for the 11th year of a sustained global expansion. And for next year, the IMF predicts that growth will accelerate to 3.4%, very close to the 3.6% estimate of the world economy’s long-run sustainable trend.

One might argue that the IMF’s forecast of a growth rebound next year merits limited credence, simply because all econometric models are designed in such a way that they tend to revert to long-term average trends. But the numbers for 2019 are different and much more credible. By this time of the year, the 2019 “projections” mostly reflect data that have already been collected. The numbers, therefore, largely reflect existing facts, such as the U.S.-China trade war, the collapse of German car production and fears of a no-deal Brexit.

The 2019 projections confirm the relatively benign picture of the global economy I described after the previous iteration of the IMF data. Despite their trade war, neither the U.S. nor China has experienced any real weakening: growth in both countries has been downgraded by a statistically insignificant 0.1% since last October. Japan’s performance has also remained unchanged, and the rest of Asia has slowed only marginally. The main problem area in the world economy this year has been Europe, with projected growth in the eurozone revised downward by more than one-third, from 1.9 % to 1.2%, and from 1.9% to a near-recessionary 0.5% in Germany.

The bad news is that the relatively benign conditions still prevailing in the world economy will genuinely deteriorate at some point, even if not in 2020 or even 2021. At that point, central bankers will have to admit that they can no longer manage business cycles and moderate economic downturns. The less bad news is that most of these policymakers now recognize that other, more effective tools exist, and that only outdated political ideology and economic dogma are preventing them from being used.

Forty years after the 1979 election of Margaret Thatcher confirmed the ascendancy of various forms of monetarism, the intellectual pendulum is swinging back to the Keynesian idea that fiscal policy — decisions about government spending, taxation, and borrowing — offers the most effective instruments for managing demand and stabilizing economic cycles. Central bankers have been the first to recognize that monetary policy has reached its limits, while many politicians and academic economists remain in denial about the paradigm shift now taking place.

Milton Friedman’s famous dictum that “inflation is always and everywhere a monetary phenomenon” was refuted by empirical studies long ago. But the much more radical challenge is that there may be no relationship whatsoever between monetary expansion and inflation. This is still an intellectual taboo, even though central banks everywhere have printed previously unimaginable quantities of new money with no inflationary consequences at all.

Even more persistent is monetarism’s most important negative injunction: fiscal policy cannot stimulate economic growth, because higher government spending crowds out private investment and higher public borrowing is equivalent to higher taxes. The various theories that fiscal policy was “ineffective,” because government borrowing would increase interest rates, inflationary expectations, or future taxation, have all turned out to be wrong.

In the past 10 to 15 years, public borrowing and debt have increased enormously in all advanced economies. But investors, far from panicking about inflation or punishing this supposed profligacy by demanding a higher risk premium, have lent governments money at the lowest interest rates in history. In many countries, they are even accepting guaranteed losses through negative rates. Yet the idea that fiscal expansion is irresponsible or ineffective, and that monetary policy should therefore continue to be the main tool of macroeconomic management, still prevails, especially in Europe.

The big story of this year’s IMF annual meeting is that this anti-Keynesian bias has completely vanished among central bankers. The main message of the keynote address by Kristalina Georgieva, the IMF’s new managing director, was an appeal for “fiscal policy to play a more central role.” Almost all of the background discussions revolved around this theme as well.

Even in Europe, the consensus may be shifting. The new European Commission’s members who are responsible for enforcing the European Union’s outdated fiscal rules, written in the heyday of late-20th century monetarism, have begun to admit publicly the need for less restrictive budget policies. And the permanent head of the EU department responsible for assessing national budgets has called for a “more balanced policy mix,” involving more expansionary fiscal policy “right here and right now.”

In short, central bankers and senior economic officials now almost unanimously believe that monetary policy has reached its limits and that fiscal policy should be reinstated as the main tool for managing business cycles and supporting economic growth. But many politicians, especially in Europe, still refuse to recognize that the monetarist era is over and that Keynesian demand management is the only alternative. Let us hope that changes before the next recession arrives.

Anatole Kaletsky is chief economist and co-chairman of Gavekal Dragonomics.