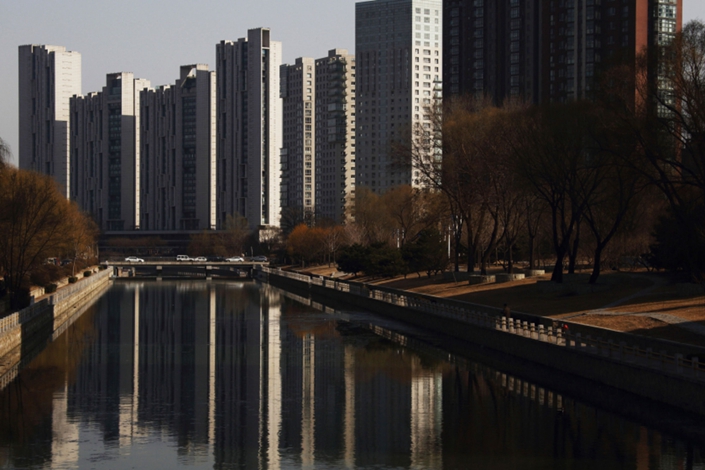 Residential towers are reflected in a river in Beijing on March 10, 2015. Photo: Bloomberg

(Bloomberg) — At least 30 cities in China have made it easier for workers to obtain highly sought-after residency permits since September in a sign authorities are keen not to let the nation’s real estate sector slow further.

Although combating property speculation has been one of President Xi Jinping’s signature policies, the slowest economic growth in 30 years is prompting some city governments to loosen the screws. A residency permit, or “hukou,” is a precursor to buying a property in many places in China and making it easier to get one has the effect of spurring sales.

An extreme example was seen last month in Hainan, where almost all non-local residents working in the island province were allowed to obtain a hukou. While Hainan’s goal is to accelerate population growth ahead of it becoming a free-trade port by 2020, its home market will inevitably be warmed up first, analysts say.

“As a byproduct, home-buying restrictions in some Hainan cities will be loosened,” said Yang Kewei, a Shanghai-based research director at China Real Estate Information Corp. “New residents are instantly allowed to buy property when they acquire a hukou.”

Homes sales in Hainan slumped 45% in the first nine months versus the same period of 2018.

In some cities where it was already easy to get a hukou, such as Xinxiang and Luohe in Central China’s Henan province, it’s become even simpler, Yang said. Smaller towns wanting to boost their property markets often loosen hukou requirements under the guise of attracting more skilled workers, he said.

Home-price growth data for September showed the slowest gains in seven months. Home sales by area across China will slip 1% this year from last year, and decline another 4% in 2020, China International Capital Corp. wrote in a report Monday.