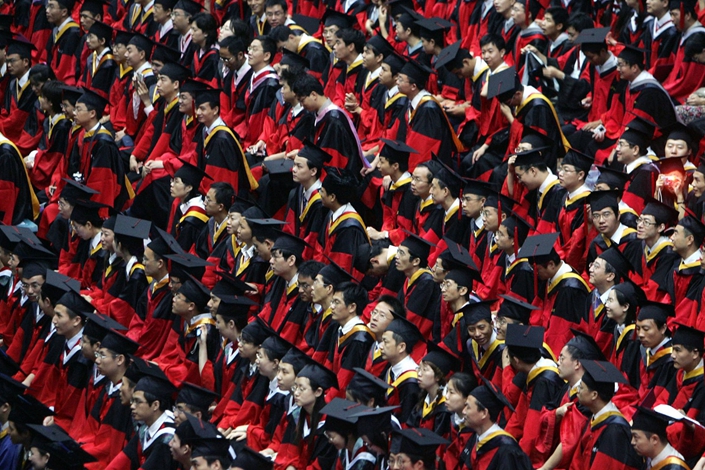 Students graduate during a ceremony at the Tsinghua University on July 18, 2007 in Beijing. Photo: Bloomberg

(Bloomberg) — A selloff in dollar bonds issued by two Chinese university-backed companies has revived concerns about the finances of such firms, as well as the strength of state support.

In the past week, investors have dumped dollar debt issued by subsidiaries of Tsinghua University and Peking University, the country’s top two tertiary institutions, pushing prices to record lows.

The financial woes affecting the two companies, one of them a leading semiconductor producer, highlight the risk arising from the murky regulatory oversight of a relatively obscure corner in China Inc.

The plunge shows a worrying loss of confidence for companies such as Tsinghua Unigroup Co., which is tasked with helping President Xi Jinping achieve his goal of challenging the U.S.’s global dominance in technology.

Tsinghua Unigroup’s $750 million bond due 2023 rose by 0.8 cents on the dollar at 11 a.m. in Hong Kong, off Friday’s record low. The selloff occurred after concerns grew about the company’s rapid buildup in debt in recent years and its ability to repay its bonds.

Peking University Founder Group’s dollar bond due 2023 remained at the record low of 55.3 cents on the dollar that it hit on Monday. Redd Intelligence reported late Monday that the company secured a commitment from China Cinda Asset Management Co. for 8 billion yuan ($1.1 billion) in loans backed by assets.

Tsinghua Unigroup’s debt-to-asset ratio jumped to 73.42% last year from 62.09% in 2017 and 59.09% in 2016, after the company went on a borrowing spree to finance takeovers and other investments to boost its position in the chip industry.

The frenzied business expansion not only pushed up the company’s debt level but also eroded its profitability: Tsinghua Unigroup turned a net loss of 631 million yuan last year from a net profit of 1.06 billion yuan the previous year.

Lingering uncertainties about Tsginhua Unigroup’s future ownership also unsettled investors. Tsinghua Holdings Corp., its parent company with a 51% holding, sought to sell a 36% stake to a local government investment arm in the southern city of Shenzhen last year. However, the company said in August it has canceled the plan.

The shelved stake sale emerged after Beijing laid out a plan to clean up commercial assets run by universities and colleges so as for the latter to focus more on education.

Seeking to appease investors, Tsinghua Unigroup’s executives said Friday that the firm has more than 17 billion yuan of cash in the offshore market, as well as credit lines of 250 billion yuan. They added that the company’s shareholding structure will remain unchanged for now, after securing backing from China’s senior leadership.

Despite the company’s reassurance, its ties with the university may continue to invite questions about the magnitude of state support it actually enjoys, said Yang Hao, a fixed income analyst at Nanjing Securities.

“The market is likely still watching this factor,” Yang said.

Similar uncertainty has previously spurred concern toward China’s local government financing vehicles — investment arms responsible for building and operating major infrastructure projects across China. These borrowers are usually heavily indebted and lack formal state backing, although they are typically seen as carrying an implicit guarantee from Beijing at times of crisis.

Founder Group, whose businesses range from IT to pharmaceutical and commodities-trading, is in no better position: its debt-asset ratio rose to 82.74% as of the end of June from vs 81.94% at the end of last year, with net losses widening to 1.05 billion yuan from 867 million yuan in the same period.

The crisis surrounding the two companies is of growing interest because their destiny is crucial to Beijing’s push to fulfill its technological ambitions, with many of them reliant on subsidies from the government to stay afloat: Tsinghua Unigroup received 2.51 billion yuan worth of such support last year, without which its net loss would have widened to 6.79 billion yuan.

“The drop in Tsinghua USD bonds is surprising. Such strategic industry and prestigious entities ordinarily should not be considered risky,” said Owen Gallimore, head of credit strategy at Australia & New Zealand Banking Group Ltd. But he added that the current difficulties are unlikely to hurt China’s efforts to build a chip industry because the nation isn’t reliant on foreign capital in this sector.