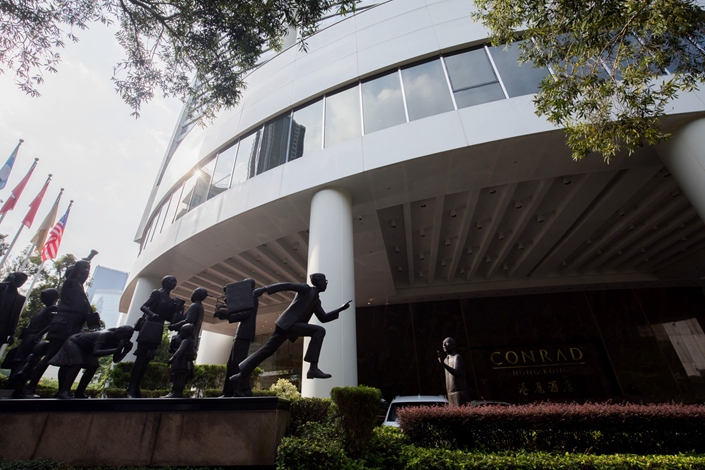 The Conrad hotel in Hong Kong on Aug. 28. Photo: Bloomberg

(Bloomberg) — From protests in Hong Kong to uncertainty around trade, the damage from political turmoil involving China is already baked in for some large U.S. hoteliers. And even with the initial phase of a trade deal in sight, the cost may not be easy to make up for.

Expedia Group, an online travel service, is the latest leisure company that cited Hong Kong as one reason for their disappointing results. Last week, Marriott International said that revenue-per-available-room, or revpar, a key hotel business metric, declined 27% in Hong Kong in the third quarter. And that came shortly after Hyatt Hotels and Hyatt Worldwide each reported a bigger decline in the same measure.

“Revpar is seeing a sharp slowdown from earlier this year,” said Bloomberg Intelligence (BI) analyst Brian Egger. This slump, he said, can be attributed to a combination of things, including a slowing economy in China, protests in Hong Kong and the U.S.-China trade war.

Other companies face similar headwinds. InterContinental Hotels Group said unrest in Hong Kong, along with “tougher trading conditions in the U.S. and China” hurt businesses last quarter, leading to a 0.8% decline in revpar. Uncertainty around the trade war had an impact on corporate business demand on the Chinese mainland, Mark Debenham, a spokesman at InterContinental, said in an email.

And it’s not just U.S. hotels that are suffering. AccorHotels, based in France, last month tightened its 2019 forecast range, citing “uncertainties looming over Asia-Pacific.”

While hotels’ Asia businesses are taking a setback, the outlook in the U.S. doesn’t look promising either. According to the U.S. Travel Association, the volume of people visiting the country will decline about 0.6% over the next six months from a year ago.

With headwinds from “the macro environment possibly increasing” in the fourth quarter, Expedia shares may not recover soon after a 28% plunge Thursday, Bank of America analysts warned. Another major online travel agency, Booking Holdings, will report third-quarter results after the market closes and its shares fell as much as 8.3% ahead of the report.

Political developments may set the tone for the companies, according to BI’s Egger. The comparisons could get easier for hotel operators if there’s a trade agreement and the crisis in Hong Kong finds resolution. “Generally speaking, more harmonious geopolitical conditions will lend itself to more favorable travel conditions,” he said.