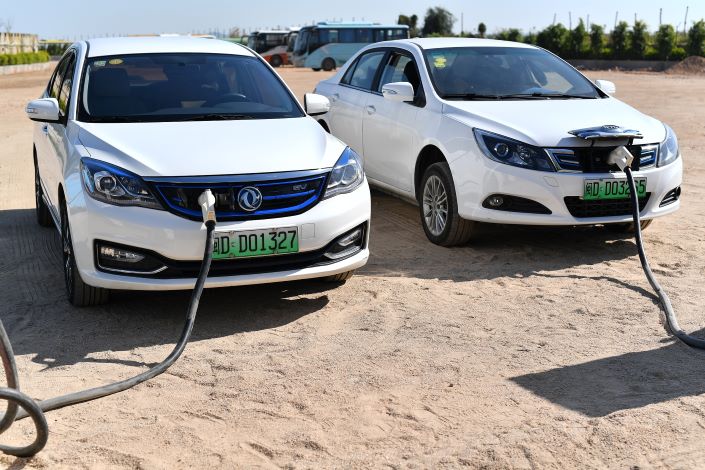 (Bloomberg) — China is considering further cuts to subsidies for electric-vehicle purchases, according to people familiar with the matter, threatening to deal another blow to a once-burgeoning industry that’s facing an unprecedented slump.

Industry regulators in the world’s largest EV market have been discussing the proposal but are holding off on a decision until they weigh car sales data over the coming months, according to the people, who asked not to be identified because the discussions are private. The plan involves reducing subsidies on consumers’ purchases of EVs next year but discussions are still at an early stage so there’s no guarantee the cuts will happen then, two of the people said.

China, which began subsidizing EV purchases in 2009 to promote the industry, has been gradually reducing handouts in the past few years to encourage automakers compete on their own. But the last time the government cut subsidies it triggered the country’s first drop in EV sales on record, exacerbating what had already been the most prolonged downturn in the world’s largest auto market.

The slump in China has dragged down the global EV sector as the country accounts for about half of the world’s sales of electrified cars. Still, regulators continue to face pressure to reduce handouts as state support helped bankroll the livelihood of hundreds of local startups and fueled concerns about a bubble in the industry.

But here’s the dilemma: Pull the levers too fast and it risks undermining China’s bigger ambitions of leading the world away from fossil-fueled gas guzzlers. China considers EVs as a strategically important sector and is mulling a target for 60% of all automobiles sold in the country to run on electric motors by 2035, people familiar with the matter have said.

China’s finance ministry, which has been overseeing the discussions, didn’t immediately respond to faxed queries.