After Double 11 Smashes Shopping Records, What Next for China’s E-Commerce Giants? 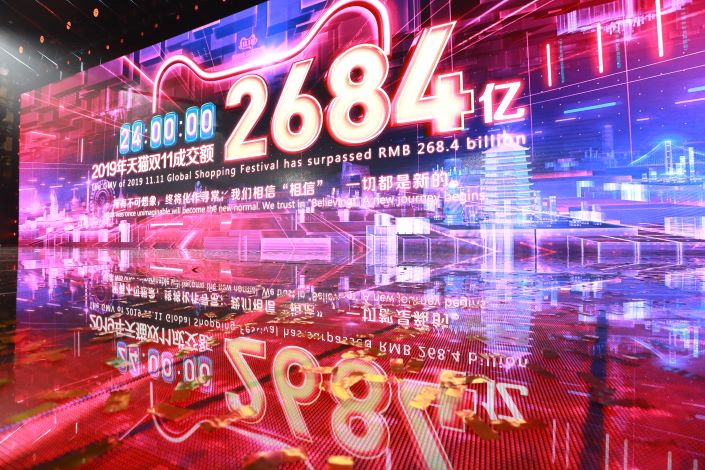 (Hangzhou) — China’s “Double 11” shopping extravaganza is over for another year. But after smashing through a litany of records, where do the country’s e-commerce giants go next?

On Monday, Alibaba’s one-day gross merchandise volume — the total revenues of orders placed across its online platforms via its affiliated payment service Alipay — hit a record high of 268.4 billion yuan ($38.3 billion), despite growing at the lowest ever year-on-year rate of 25.7%, official data showed.

Over at rival JD.com, which held a number of similar sales promotions, total sales revenue hit 204.4 billion yuan during the first 11 days of November. The company is yet to release detailed performance data for Nov. 11.

Alibaba’s slowing Double 11 growth rate shows the difficulties e-commerce platforms face in sustaining high levels of expansion given their existing large revenue base and concerns that China’s consumption power may be flagging.

In addition, Chinese consumer attitudes toward Double 11 seem to be changing. Jiang Fan, the head of Alibaba’s Tmall and Taobao e-commerce platforms, described a new mobile game which gives players coupons for inviting friends to join the buying frenzy as an “interesting” shopping experience. Online comments from shoppers made it clear many saw it as a marketing gimmick.

Consumers also appear increasingly impatient when it comes to Double 11’s complex shopping rules. Although many sellers offer direct discounts on their goods, e-commerce platforms, including Alibaba’s, often require shoppers to jump through complex mental hoops to weigh up the relative value of the discount coupons they issue to stimulate more sales.

Perhaps Alibaba’s ever-more-jaded customers helped prompt the company to transform this year’s Double 11 into a product-launch event as well as a shopping festival. Jiang told reporters at Alibaba’s Hangzhou campus Monday that vendors, particularly cosmetics partners, rolled out a total of more than 1 million new products during the festival, about 120,000 of which were imported goods.

This year’s festival also marked Alibaba’s first without the company’s effervescent former CEO Jack Ma at the helm. His replacement, Daniel Zhang, appeared relaxed when he appeared at the company’s Hangzhou press center for the final wrap-up. As Alibaba mulls a Hong Kong IPO and faces down a year full of uncertainties, Zhang will undoubtedly be delighted that this year’s Double 11 went off without a hitch.