Why Some Rural Families Have Stopped Trying for Sons 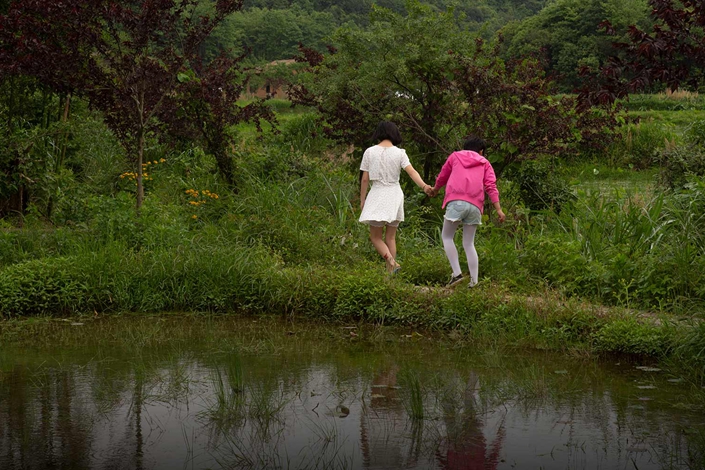 (Sixth Tone) — In 1985, five years after the implementation of a nationwide one-child policy, a couple from a village in northeastern China decided to try for a son. They already had two daughters, so when the wife learned she was pregnant, they went on the lam, evading local family planning officials while waiting for the birth of their child.

To their relief, it was a boy. Still in hiding, they sent a photo of their newborn son to the husband’s widowed mother, who was desperately hoping for a grandson to continue the family line. Despite photographic evidence, the woman did not believe the news until another nine months later, when the couple paid a hefty fine and returned home, infant son in tow. The moment they arrived, the grandmother placed the baby down and unwrapped his swaddling clothes. Finally seeing with her own eyes that the child was indeed a boy, she burst into tears of joy.

A year later, a very different story took place in a neighboring village. Following the partial relaxation of the one-child policy in the mid-1980s, which allowed rural families to have a second child if their first was a girl, another couple — parents of a young daughter — debated whether to take advantage of the new rules to try for a boy. After several years of deliberation, they surprised their fellow villagers by opting against another pregnancy.

By the time I visited this village for fieldwork over two decades later, the choice to not keep trying for a son no longer seemed strange to residents. In 2010, of the 165 village couples in which the wife was of childbearing age and already had at least one child, 50 had only a daughter. Of these, 34 had obtained a so-called one-child certificate, pledging to the government not to have another child in exchange for a small subsidy. The year before, there were 951 couples with only a daughter in the surrounding township; 541 had obtained a one-child certificate.

Historically, the Chinese family ideal has included multiple children and at least one son. In the country’s patrilineal tradition, sons, not daughters, have been financially responsible for supporting their parents in old age. In rural areas, where residents do not enjoy the same retirement pensions as their urban counterparts, having at least one son was long a crucial form of old-age security. Culturally, sons were also necessary to continue the family line. A family without a son was dismissed as having no future.

So why were so many rural couples with daughters voluntarily choosing not to try for a second child? Between 2004 and 2012, I spent a total of 17 months living in rural northeastern Liaoning province, conducting research into locals’ lives, childrearing practices, intergenerational relations, marital transactions, and traditions of ancestor worship in an effort to understand the socioeconomic and cultural forces driving this change in reproductive preferences. I found that significant transformations were taking place within Chinese families which, combined, were engendering a willingness to have only one daughter.

To start, young couples in the village had adopted a new ideal of happiness, one defined by material consumption and leisure. A few young villagers used the phrase “life is to be enjoyed” to describe the new mindset. Thanks to a burgeoning market economy, villagers had access to a wide variety of consumer goods. To afford them, many took jobs in factories, restaurants, and construction sites outside their home villages, while devoting their limited free time to playing mahjong or visiting friends after work.

Young villagers came to see childrearing as jeopardizing their ability to afford and enjoy these new life ideals, and were therefore less likely to want to have a second child. In particular, many village women, who shoulder the majority of child care duties, embraced the decision to have only one daughter. Some were even able to persuade their husbands, who may have been holding out hope for a boy, to be content with a girl.

At the same time, local childrearing practices were changing. In the words of a popular saying: “A tiger can block a road, but 10 mice are nothing but a meal for cats.” Villagers saw concentrating their resources on raising one successful child as preferable to splitting their limited means among multiple kids. Parental support in this context ceased to be male-biased, as families with daughters wholeheartedly supported their education.

In line with the country’s patrilineal traditions, rural parents expected to depend on their sons to support them in old age. But today’s aging parents are finding that sons are not always the most reliable source of assistance. In part, this can be attributed to changing intergenerational dynamics. Unconditional filial devotion has been replaced by a sense of reciprocity: Parents must earn filial respect through fulfilling their roles as loving providers, including by financing their children’s weddings and offering free child care. This has strained relationships, and some sons and daughters-in-law no longer feel bound to care for their aging parents.

Yet while filial support has declined, many daughters maintain a close bond with their parents, even after marriage, visiting them frequently and helping with household chores. Partly thanks to the above-mentioned shift in intergenerational relationships, married women are no longer confined by the need to constantly care for their in-laws, and their income from working outside the village enables them to offer their birth parents more financial support.

Meanwhile, not only are sons not fulfilling their filial duties, they have also become a financial burden on their parents, thanks to the skyrocketing cost of getting married. A groom’s family is expected to shoulder the lion’s share of wedding expenses in rural China, to say nothing of the officially discouraged, but nevertheless common practice of paying bride prices. In 2007, the total cost of a son’s wedding could set a family back about 100,000 yuan ($13,000) — more than 20 times the average annual per capita income in rural Liaoning.

The increasing financial drain on grooms’ families has trapped many in debt. And an excess of men on the marriage market — itself an artifact of the one-child policy — has given young women the upper hand in negotiating marriage arrangements, further increasing the cost of getting married. Sons have gone from a source of security in old age to a burden.

Finally, young villagers are often skeptical of the importance of having male descendants. Wealth has replaced family continuity as the most significant marker of social status in villages, thus removing the stigma attached to families without a son. Families without sons can establish their status in their community by devoting themselves to accumulating money and raising a successful daughter.

In 2016, China finally scrapped the one-child policy and instituted a new rule allowing all families to have a second child. Although it is still too early to know for sure what impact this will have on reproductive choices, boosting the birth rate may prove more challenging than expected.

More to the point, the fact that so many rural Chinese were already willing to forgo a second child — even if it meant not having a son — points to a tectonic shift in the country’s reproductive preferences and gender dynamics. Parents no longer think of girls as wasteful “splashed water,” as one traditional adage would have it. Instead, a number of the elderly villagers I spoke with quoted a very different maxim: “A daughter is like a little quilted vest, warming her parents’ hearts.”

Shi Lihong is an associate professor in the department of anthropology at Case Western Reserve University.