Opinion: Vocational Student Interns Should Be Protected From Exploitation 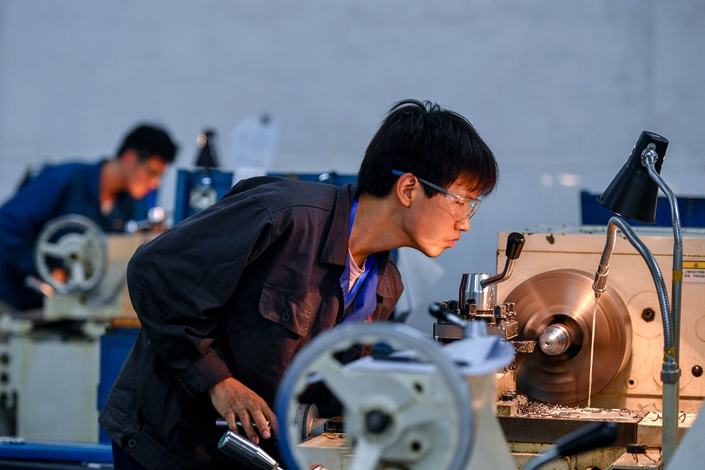 Internships are a core part of vocational education in China. Every student at a vocational school has to complete a six-month “replacement internship” to graduate, in which they are sent to work at companies.

But these students are often treated as nothing more than cheap labor, which deviates from the purpose of an internship — paving the way for their professional career. The Ministry of Education (MOE) needs to work with schools and companies to protect students’ rights.

These internships were first developed by the MOE in 2000, when it advised vocational colleges to cooperate with enterprises and allow students to learn in the workplace.

In 2010, the MOE told vocational schools to combine internships with enterprises’ needs in a more flexible way to help cope with the shortage of skilled workers.

In 2011, the Southern Weekly newspaper revealed that students made up a significant part of a Foxconn factory’s workforce. Many were younger than 16, poorly paid, recruited during peak season and dismissed at low season.

At one of Shenzhen’s best vocational schools, 40 logistics students were sent on a compulsory 18-month internship from December 2017 to June this year.

The students had to choose from 11 partner companies at a job fair organized by the school. Most of them put either UPS or Yusen Logistics — both major global firms — as their first choice.

However, to their surprise, the teacher in charge of the internships told them that those two firms would only be taking a total of eight interns. Therefore, many of the students didn’t get to go to the company they wanted to, such as one student called Ling who ended up at a small Chinese company. Another student, Peng, wanted to go to major Hong Kong-based conglomerate Chow Tai Fook, but was told by the teacher she would instead be sent to Shenzhen Profit Fields Logistics, which was suffering from a shortage of staff.

Students working for logistics firm Hecny were paid the least, just 2,000 yuan ($284.60) per month for carrying boxes around. They said they were promised 2,800 yuan, but were then told that 800 yuan of that figure was a performance bonus, which none of them was ever paid.

SF Express, one of China’s major courier firms, paid the interns 5,000 yuan a month to manage warehouses. However they were eventually made to perform deliveries, running around outside and learning little.

Even the students who did bag a place at a Chow Tai Fook store in Shenzhen ended up doing manual labor, packing jewelry on assembly lines. Against the rules, they worked overtime every day.

According to the 2016 rules, students have the right to choose their own internships, internships should match students’ majors, interns should make up no more than a fifth of the workforce in one position, interns should be paid no less than four-fifths of what regular employees make and they are not supposed to work at night or for more than eight hours a day.

Many of these rules were broken by the logistics companies that took on these interns. In at least one office, half of the workforce was interns. Interns were paid just two-thirds of what regular employees were making. And overtime, up to four hours a day in the week and half a day on the weekend, were extremely common phenomena experienced by all students.

The company where one of the students, Ling, worked had only 29 employees. After three months, she had more or less mastered her role. However, she came into conflict with the company, when her manager told her and her fellow interns to work on the weekend without overtime pay, in the name of learning.

Ling and another student wrote to the manager, saying that they wouldn’t learn anything new on the weekend, and saying that they’d rather work late on Friday if their education required it. The manager refused to bend, simply saying that the “workers have to follow the company’s regulation.”

The students were told by their teachers that they couldn’t change companies or end their internships, if they wanted to graduate. One Chow Tai Fook intern quit his internship and was booted from his course. Of his cohort, he was the only one not to stick it out for the 18 months. “It’s not worth giving up a diploma for this internship, which means spending the last five years in school for nothing, and we came to this school for nothing,” Ling said.

Their heavy workload came on top of their academic studies. They have to write reports for their teachers, and many of them were also studying for college entrance exams or English test. When the time came to submit their thesis, they slept for only four or five hours a night.

The story of this group of students is not unusual, and the situation is much worse in some less-developed inland cities, where some interns work 12-hour night shifts in factories.

We can see how these internships have gone from a tool to enhance education, to a tool to fill labor shortages. Students should be given more power in this situation, as one said “if the government doesn’t act, we don’t have anything in hand to counter the company or the school.”

Chen Zhinan was a research assistant at the department of sociology, University of Hong Kong. The findings of this article were part of the department’s research project “Learning to Labor: Social Media and Migrant Labor Protection in Mainland China.” Interviewees have had their names changed for the purpose of source protection.