China Can Be Rich and Climate Neutral by 2050, Energy Group Says 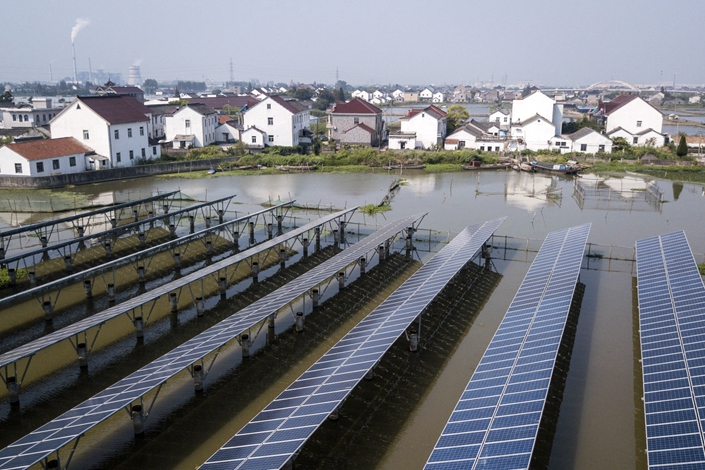 An aerial view of a solar farm on the outskirts of Jiaxing, East China's Zhejiang province, on Sept. 7 2018. Photo: Bloomberg

(Bloomberg) — China can become a fully developed economy that doesn’t produce any carbon emissions by mid-century.

The nation’s high savings and investment rate allow for the spending required to meet the twin goals, according to a report by The Energy Transitions Commission (ETC), a global coalition of executives from across the energy landscape committed to the Paris climate agreement.

The move by the second-biggest economy toward zero emissions is critical for the world to counter climate change. While China has spent more money than any other country on clean energy, it’s still the biggest consumer of coal, the dirtiest fossil fuel, and is estimated to have as much coal power capacity in the pipeline as the current total in the 28-nation European Union.

The nation could triple its per-capita economic growth and standard of living while cutting final energy demand by 27% in 2050, said the ETC, which published the report in partnership with the Rocky Mountain Institute. That would require reductions in steel and cement use, a more circular use of materials such as plastics, and energy efficiency measures including the electrification of transport.

“China has the institutional, financial and technological advantages of ‘concentrating resources to accomplish large undertakings,’ which makes it well placed to stimulate long-term and large-scale investment once setting up strategic goals,” said Jules Kortenhorst, CEO of RMI. “This helps lay a solid foundation for China to pursue zero-carbon objectives by 2050 and gain the economic and environmental advantages which would result.”

China’s total primary energy demand could fall by 45% from today to 2050 as a result of less energy being lost in electricity generation.

Fossil fuel demand could tumble more than 90% as non-fossil fuels would jump 3.4 times.

75% of power generation will be met by wind and solar with the support of grid flexibility and storage. This will also need a more than threefold increase in production and use of hydrogen to more 80 million tons in 2050, along with important roles from increased bioenergy and carbon capture.

The report also highlighted key sectoral actions and public policies needed to meet the goal, such as a national carbon price system.