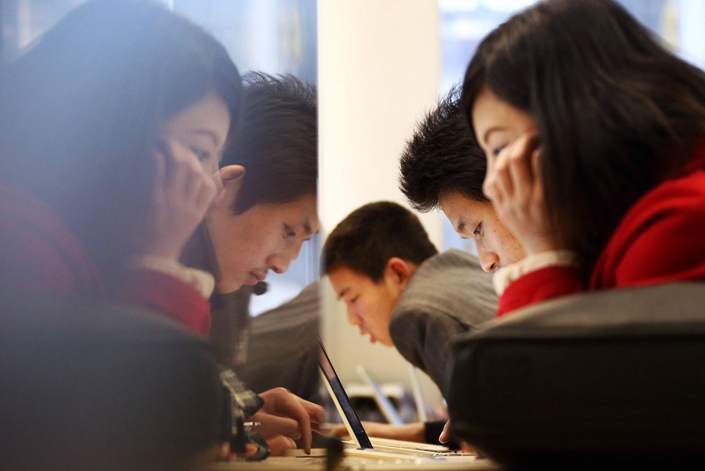 Customers try Apple Inc. laptop computers at the company's store in the Wangfujing area of Beijing on March 12, 2013. Photo: Bloomberg

(Bloomberg) — China said it will raise penalties on violations of intellectual property rights in an attempt to address one of the sticking points in trade talks with the U.S.

The country will also look into lowering the thresholds for criminal punishments for those who steal IP, according to guidelines issued by the government on Sunday. It didn’t elaborate on what such moves might entail.

The U.S. wants China to commit to cracking down on IP theft and stop forcing U.S. companies to hand over their commercial secrets as a condition of doing business there. China said it’s aiming to reduce frequent IP violations by 2022 and plans to make it easier for victims of transgressions to receive compensation.

The two countries are working toward a partial trade deal and leaving the more controversial issues for later discussions. China’s chief trade negotiator spoke last week about its plans for reforming state enterprises, opening up the financial sector and enforcing intellectual property rights — issues at the core of U.S. demands for change in China’s economic system.

“Strengthening IPR protection is the most important content of improving the IPR protection system and also the biggest incentive to boost China’s economic competitiveness,” according to the guidelines. Local governments will be required to implement the strengthening of IP rights, it said.

In May, the U.S. added Huawei Technologies Co. to what’s known as the entity list in an effort to block U.S. companies from selling components to China’s largest technology company. Huawei is accused of being a threat to America’s national security, and has denied those claims.

Last week, Chinese President Xi Jinping said his nation wants to work toward a phase one trade agreement with the U.S. that’s based in part on “equality.” That’s a guiding principle that President Donald Trump just hours later said he doesn’t share.

“This can’t be like an even deal, because we’re starting off on the floor and you’re already at the ceiling. So we have to have a much better deal,” Trump said in an interview Friday on Fox News.

Negotiators from both countries have been talking regularly, trying to bridge the remaining differences on issues including Chinese pledges to buy American farm products, protect intellectual-property rights and open its economy further to foreign companies. They have struggled to agree on exactly what tariffs each side would roll back as part of the agreement’s initial step.