Over 13% of China’s Banks Are Highly Risky, Central Bank Says 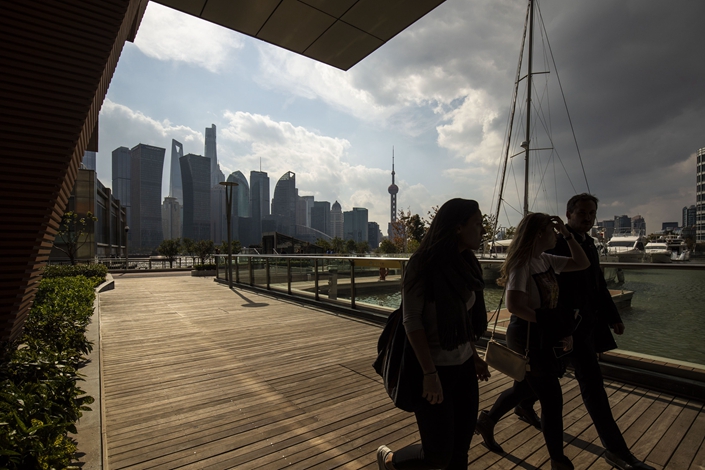 People enjoy the sunshine while standing on an area collectively known as the North Bund, with the skyscrapers of the Pudong Lujiazui Financial District across the Huangpu River in Shanghai on Nov. 13, 2018. Photo: Bloomberg

(Bloomberg) — China’s banking sector is showing signs of strain, with more than 13% of 4,379 lenders now considered “high risk” by the central bank.

The high risk category contains 586 banks and financing firms, most of which are smaller rural institutions, the People’s Bank of China said in its 2019 China Financial Stability Report, published late Monday. A first review last year found about 10% were deemed high risk, though that calculation didn’t include many consumer finance firms.

One bank got a “D” grade this year, meaning it went bankrupt, was taken over or lost its license. No banks were named in the report.

The health of China’s small banks has become a growing concern after the seizure of one lender in May forced losses on creditors and cast doubt on the longstanding assumption that the state would backstop troubled lenders. The economy is growing at the slowest pace in almost three decades, cooled by a crackdown on risky lending and the trade war.

Banks are also facing challenges from government efforts to boost growth and help struggling small businesses, which threaten to squeeze lending margins and lead to a pileup of bad debt.

While foreign and private banks are seen as relatively safe, more than one-third of rural lenders were rated “high risk,” according to the report. Some medium- and small-sized financial institutions received poor ratings because of the slowing economy, with small lenders more sensitive to swings in the economy, it said.

The central bank has notified each bank of its rating, and required some to increase capital, reduce bad loans, limit dividends and even change management, the report said.

The PBOC also stress tested 30 medium- and large-sized banks in the first half of 2019. In the base-case scenario, assuming gross domestic product growth of 5.3%, nine out of 30 major banks failed and saw their capital adequacy ratio drop to 13.47% from 14.43%. In the worst-case scenario, assuming GDP growth of 4.15%, 17 out of 30 major banks failed the test. Under global standards that exclude reserve capital requirements, one out of the 30 lenders failed in the base-case scenario and seven failed in the worst-case scenario.

A liquidity stress test at 1,171 banks, representing nearly three-quarters of China’s banking sector by assets, showed that 90 failed in the base-case and 159 in the worst-case scenario.

The central bank said it made progress in containing financial risks in the past year, but warned that some potential threats require more time to eliminate. Financial risks can “occur easily” and more frequently as the economy cools and the risk of a slowdown in global growth increases.

Faced with this complex situation, the central bank said that it should “stay cool-headed” to keep a balance between economic growth and risk control.

Next year marks the last year in a three-year campaign by policymakers to contain financial risks. The PBOC said it will “fine-tune” its policies to fit the economic situation, ensuring that they aren’t too tight or too loose. The general direction of containing financial risks will be unchanged, it said.