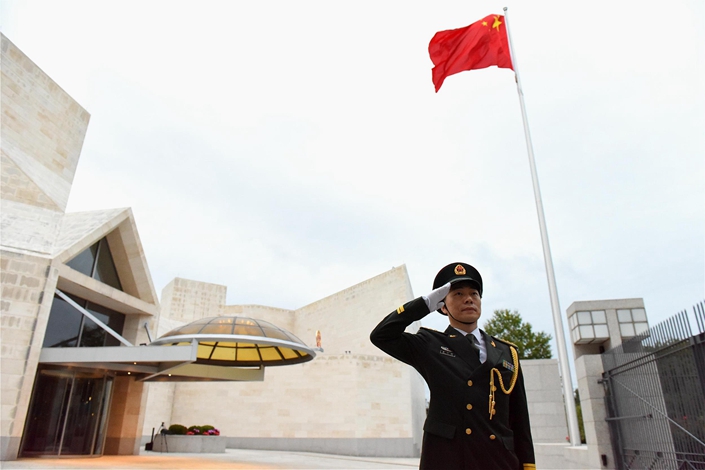 The Chinese Embassy in Washington on Sept. 30. Photo: VCG

(AFR) — China has leapfrogged the United States to have the world’s biggest diplomatic footprint amid a fierce contest between the two superpowers for influence, according to a new report.

The Lowy Institute’s updated Global Diplomacy Index, released Wednesday, also shows Australia further punches below its weight when it comes to its diplomatic presence around the world.

The index tracks 61 countries and regions in total — G20, the developed economies of the Organisation of Economic Cooperation and Development (OECD) plus most Asian countries — and the number of embassies and consulates they have.

China has 276 posts, three more than the U.S., cementing its rise from 2016 when it was also behind France.

“While Beijing and Washington are neck-and-neck in terms of the number of embassies they have, China is unmatched in its number of consulates, with 96 globally compared with the United States’ 88, suggesting its diplomatic expansion is closely linked to its economic interests,” the institute said.

Beijing’s gains have come at the expense of Taiwan, with new posts opened in several countries that flipped their diplomatic recognition to China.

American diplomacy was looking rudderless, with just 73% of key U.S. State Department positions filled, and with threats looming from the Trump administration to slash its budget by almost 25%, the institute said.

While Australia had opened two new posts in the past two years, in Tuvalu and Morocco, with plans for a further five posts in the Pacific by 2021, the institute said Australia still had a “diplomatic deficit.”

“At 27th place, it is on par with Belgium, despite having more than twice the population and almost three times the economic size,” the report said. “While many countries continue to grow their own networks, Australia is treading water. Maintaining its diplomatic momentum is key to staying afloat.”

As China’s rise sparks tensions in the Indo-Pacific, Japan has also made steps to expand its diplomatic firepower and has overtaken Russia to be ranked fourth with 247 posts. Tokyo has opened seven new posts in pivotal countries such as Cambodia, the Philippines, the Seychelles and Vanuatu.