Winter Travel in China for Misanthropes 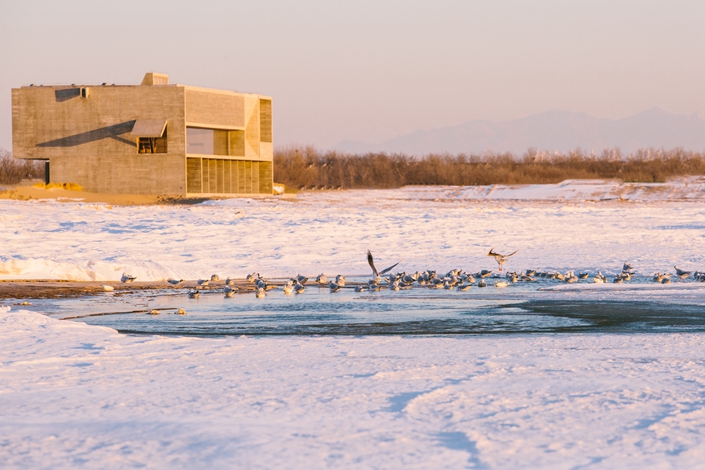 I can safely categorize myself as a misanthrope — a person who hates other people. Well, not exactly, or at least not all of the time.

For example, I have never had much interest in visiting Beidaihe, China’s famed beach resort for Communist Party leaders. That’s because it normally looks like this:

But, I went anyway because I couldn’t resist the temptation of this:

and this, the Seashore Library:

An iconic image of Beidaihe is that of the late Chairman Mao, sitting on the beach wearing nothing but swimming trunks and a towel. “He swam in weather fair or foul,” wrote Jane Perlez of the New York Times. I am pretty sure that Mao had all the tranquility he needed to think big thoughts.

Mao’s successors continue the tradition of spending summers in Beidaihe, a district of the city of Qinhuangdao, in North China’s Hebei province. But they never mingle with the masses. Ordinary Zhangs, Wangs, and Lis have to stay in nondescript beach resorts and crowd the public beaches. For beachgoers with the wherewithal to travel overseas, Beidaihe is really a place to avoid in the summer.

But Beijingers are desperate for a beach house. Seeing an opportunity, businessman Ma Yin made a daring decision six years ago. He built Aranya, a high-end villa and resort compound on a stretch of beach a few kilometers south of where Mao once swam. For 2 million yuan ($284,600) to 3 million yuan, you can now own a loft apartment complete with a community pool, club and beach access. Don’t want to own a beach house? Good news, part of the development has been turned into a Club Med, the once-French, now Chinese-owned resort chain known for creating family fun.

Ma’s stroke of genius was creating four stunning architectural pieces to give the development the feel of cool. In fact, they were eye-catching enough to become internet sensations in China.

The Seashore Library, also called the “Lonely Library,” the Marine Auditorium and the UCCA Center for Contemporary Art’s UCCA Dune art museum are all on the beach, a few hundred meters from one another. And the newest Aranya Art Center is a short stroll away inland.

UCCA Dune and the art center were the best parts of my Beidaihe experience. The galleries, which are open to the public, exhibit the work of young, up-and-coming Chinese artists. The works on display completely justify the 60 yuan price of admission. Service was erratic at times. I arrived at the UCCA Dune on a day when there was sudden power outage. An installation featuring a conveyer belt that drops fluttering winged pine seeds from three meters high stood motionless. It didn’t stop me from appreciating the charm and creativity literally hidden under sand dunes.

The two other structures — the Lonely Library and the Marine Auditorium were disappointments. Structurally speaking, both are stunning — cement, wood, glass and steel, reminiscent of Tadao Ando’s churches in Japan. In fact, the crosses inside and outside of the auditorium blur the line between its secular and spiritual use. There is no priest or service there. Neither structure is open the public, but if you stay at the Club Med, you are allotted one pass per guest per stay, and if you own one of the apartments, you have unlimited access.

Despite the signs demanding “no noise, no photos, no food” in the packed library, some people’s “indoor voices” often carried across the room. In the tranquil church, children yelled for their mothers, or shook their toys vigorously to declare their existence.

One woman in New Balance sneakers and Burberry trench coat complained loudly to her boyfriend: “How [expletive] can the Lonely Library be lonely? So many people live here!”

She is right. That’s why I would recommend visiting Beidaihe in the dead of winter. Dress warmly and brace for the wind, or even better, the snow. That’s when the Seashore Library and the auditorium show their beauty.

Tips for traveling to Beidaihe: Take the two-hour high-speed train from Beijing. Take car to the Club Med resort. Spend the rest of Saturday walking around the beach. Sunday, hire a car for the day to visit Shanhaiguan, the famed eastern end of the Great Wall, then go straight to train station and head home.

There are a few other places I would recommend visiting in China during the off-season.

This covers the Tibet autonomous region and also the areas in adjacent provinces with significant Tibetan populations, such as northwestern Yunnan’s Shangri-La city, Xiahe county in Gansu province and Sichuan Province’s Xiangcheng county.

These are all areas of high elevation, typically above 3,000 meters (10,000 feet). The air is thin and altitude sickness is common. But somehow, it feels like a cleaner world and a much more idyllic life than the hustle and bustle in Beijing and Shanghai. Particularly in winter, snow blankets the open grasslands, and you can see black dots here and there. Those are yaks carrying snow on their back. You can also see dots of red — Tibetan woman in their colorful clothes still hard at work. It’s a stunning place.

For accommodation, you can take your pick: the Songtsam Lodges, the Hidden Valley Resort, the Banyan Tree Hotel in Yunnan, or Norden Camp in Xiahe, you can’t go wrong. They will have smiling staff preparing your hot food and yak butter tea, or a latte if you prefer. It’s the perfect place to withdraw from the world.

Puer and Xishuangbanna in Yunnan

These are the tropical hills of China. The Xishuangbanna Dai autonomous prefecture is known as home to China’s biggest Botanical Garden, and an hour’s drive away is the city of Puer — known, of course, for Puer tea. The weather here is similar to that of Southeast Asia, prone to rain and extreme heat from April to October. Winter is the best time to wake up to the moist tropical air, sip some tea, take a walk in the botanical garden, to buy some fresh papaya from the market, or go for a hike in the hills among the 1,000- year-old tea plants.

You can fly to Xishuangbanna, and hire a car to drive one hour east to Anantara Resort across the street from Xishuangbanna Botanical Garden. Puer city is two hours by car north of Xishuangbanna. You can drive to Little Panda Manor in two hours. Or you could fly to Pu’er Simao Airport, which would cut the drive down by one hour.

Hainan Island can hardly count as a possible candidate for a secluded getaway, but I am sure if one looks hard enough, there are untapped jewels everywhere. I would absolutely avoid Hainan during holidays, from Christmas to the Lunar New Year. Russians tourists descend on Hainan like snowbirds landing in Florida in December, and then Chinese officials all flock there around the Lunar New Year holidays. The sky-high prices have attracted almost any international hotel chain you can think of — St. Regis, Ritz Carlton Edition, Grand Hyatt, and One & Only, as well as the new hot brand Rosewood. So, the choices are many, but go there forewarned: “misanthropes beware.”