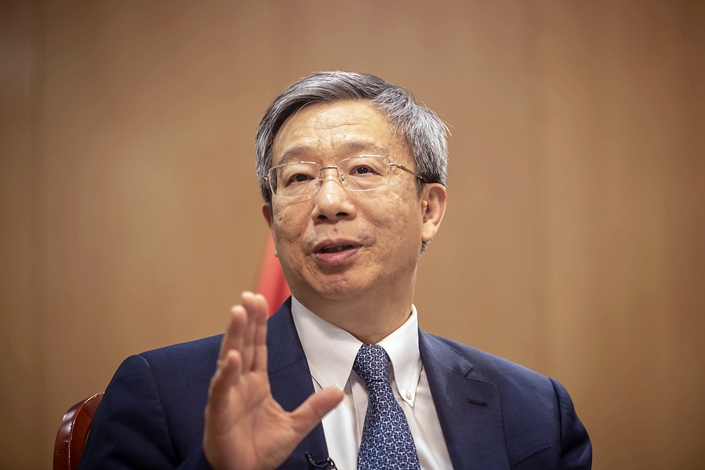 (Bloomberg) — China’s central bank governor sounded a cautious tone on the health of the global economy, while signaling that the nation’s monetary policy makers will continue to refrain from large-scale easing steps.

Policy should be prepared for a “mid- and long-distance race” and stick to a conventional approach as long as possible, according to the article by Governor Yi Gang published Sunday on the WeChat account of Qiushi, the Communist Party’s flagship magazine.

The comments were published a day after a factory gauge showed an unexpectedly strong improvement in November on a rebound in new orders. China is seeking to strike a balance between supporting a slowing economy that has been affected by tensions with the U.S., and controlling financial risks. The nation also needs to be wary of a contraction in credit as downward pressure increases, according to comments from a banking regulator in state media over the weekend.

The official manufacturing purchasing managers’ index rose to 50.2, according to data released by the National Bureau of Statistics. That’s the first reading indicating expansion since April, and may give support to the idea that the world’s second-largest economy is stabilizing amid stimulus measures and better external demand. Seasonal factors influenced the rise though, and downward pressures on China’s economy, including factory deflation, remain.

“The world’s economic downturn will likely stay for a long time,” Yi wrote. “We should stay focused and targeted, while not competitively lowering interest rates to zero or engaging in quantitative easing.”

Economic development “should not be simply judged by gross domestic product growth,” Yi said, adding that the mission of monetary policy is to keep prices stable and protect people’s money from inflation. He also repeated a pledge to keep the yuan flexible and not engage in competitive depreciation.

The outlook for China’s economy remains particularly uncertain as long as a so-called phase one deal on trade with the U.S. remains outstanding. While officials have made positive noises in the past week, the nationalist tabloid Global Times restated China’s position at the weekend that a roll-back of tariffs is necessary for an accord to be reached.

Relations have otherwise been strained in recent days over the ongoing political unrest in Hong Kong.

Yi’s comments come ahead of a high level economic meeting expected in December where top leaders and senior officials will lay out growth targets for 2020. Economists anticipate the economy will slip to sub-6% growth in 2020, a situation Beijing may be comfortable with as long as employment is strong and risks are in check.

In the purchasing manager report, a sub-index of new export orders climbed to seven-month high at 48.8 on easing trade tension, but was still in contraction. Overall orders rose back above 50 and was at the highest level since April. Businesses showed across-the-board improvement regardless of size, although small and medium-sized enterprises are still shrinking. Employment at factories remained unchanged at 47.3.

The central bank has maintained a fairly neutral policy stance compared to its global peers, trimming interest rates for commercial lenders only moderately. The People’s Bank of China has also held back out of concern on surging consumer inflation, which analysts expect to peak at 5% or 6% in early 2020. Recent policy steps have been more aimed at preventing an undue tightening of market conditions during tax payment season, rather than easing conditions significantly.

Yu Xuejun, chairman of the supervisory board for key state-owned financial institutions at the China Banking and Insurance Regulatory Commission, was cited in an article published at the weekend warning that effective transmission of monetary policy remains a problem, and that a contraction in credit remains a risk.

In Sunday’s article, Yi extensively reviewed the history of global monetary policy since the Great Depression. He said overly loose policy can harm long-term development, because it delays necessary reforms and fuels bubbles.

Meanwhile, further initiatives to promote investment are being developed. Beijing will encourage local governments in the Yangtze River Delta around Shanghai to jointly set up investment funds for major infrastructure projects and ecological development, according to a plan issued by the state Xinhua news agency Sunday.

The focus will be on big data, artificial intelligence, new-energy vehicles and the internet of things, according to the lengthy plan for the region spanning Jiangsu, Zhejiang and Anhui provinces in east China.