Varoufakis: The Limits of Lagarde 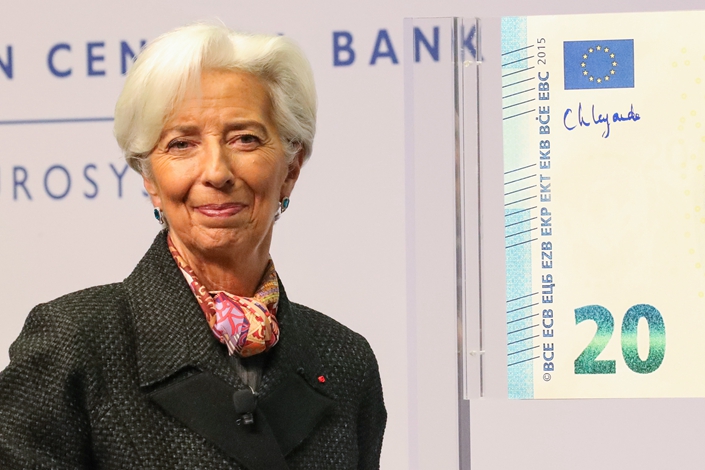 Shortly after the Eurogroup meeting of eurozone finance ministers on June 27, 2015, I bumped into a worried-looking Mario Draghi, the president of the European Central Bank. “What on earth is Jeroen doing?” he asked me, referring to Jeroen Dijsselbloem, the Eurogroup’s then-president. “Damaging Europe, Mario. Damaging Europe,” I replied. He nodded, looking concerned. We took the elevator to the ground floor and parted silently.

Journalists find it natural to assume that Draghi and I had a hostile relationship during the 2015 standoff between Greece, which I represented, and the ECB. But the impasse at which we had become stuck was not caused by a clash of characters, and it involved no mutual recrimination. Rather, it reflected an institutional failure for which I never held Draghi personally responsible. Hostility between us, being unnecessary, was absent.

My fleeting exchange with him came to mind as he recently vacated the electric chair amid much speculation about the ECB’s future direction under his successor, Christine Lagarde. It reminded me of the unacknowledged powerlessness of the ECB president, who leads a mighty institution that is far less independent in practice than it is in theory. Lagarde will now have to reckon with that powerlessness as she steers the ECB in a sea of deflationary hazards.

During 2015, Draghi sometimes made decisions detrimental both to the Greek people and to Europe’s common interest. One came on February 4. On that morning, following a meeting I had in London the previous day with financiers to whom I presented my plans for a moderate debt restructuring, the Athens stock exchange index shot up by 13%, led by a gain of more than 20% for Greek bank shares.

With that wind in my sails, I flew to Frankfurt to meet Draghi for the first time. One might think that a freshly appointed eurozone finance minister who had just managed to boost his country’s financial assets significantly would be helped by his central banker. Instead, the ECB’s governing board decided the same day to sever Greek banks’ access to euro liquidity. Unsurprisingly, Greek corporate and banking shares crashed, wiping out the previous day’s gains.

In any other country, the position of the central banker would be untenable. The remit of a central bank is to aid the government’s efforts to stabilize finance and support the economy. In the eurozone, however, political constraints force the central bank to inflict the kind of damage Draghi’s ECB visited upon our stock exchange that February afternoon.

Under Draghi’s leadership, the ECB violated the raison d’être of a central bank on other occasions. Between February and late June 2015, Draghi fueled repeated bank runs in Greece. Whereas any central banker anywhere else would have pledged full support for the banking system in such circumstances, Draghi did the opposite: He intimated his fear of bank closures and amplified speculation of imminent capital controls by regularly announcing tiny increases in liquidity provided to Greece’s national central bank. It was akin to a fire captain yelling in a crowded hall: “You are about to burn. I am gradually reducing the water cannon’s supply to a trickle. Run for your life!”

Given such calculated attempts by our central banker to engineer a run on bank deposits and stocks, it was easy to feel resentment toward him. I resisted that temptation because I appreciated Draghi’s constraints. I knew that, contrary to official propaganda, he was the least independent central banker in the developed world. He needed the Eurogroup’s approval – essentially that of the German finance ministry – to lend to failing banks in Italy, Spain, and indeed France and Germany against collateral that the euro crisis had rendered worthless. To get that permission, he had to do as he was told regarding Greece. And that meant choking into submission a Greek government that insisted on discussing what the German government did not want discussed: a sensible debt restructuring.

Seen in this light, Draghi’s decision to cut liquidity to Greece’s banks appeared almost logical. It was the same with his stance a few months later, when he sat silently in the Eurogroup meeting, listening to the German finance minister dictate to the rest that expulsion from the euro was the price of refusing levels of austerity that, ultimately, would put the ECB’s inflation target out of reach. It also explains why, on that Saturday in June, when Dijsselbloem violated every EU protocol, Draghi said nothing and expressed his anger to me only in private.

Going beyond Greece, under Draghi’s leadership, the ECB adopted instruments that intentionally misdirected enormous sums of public money. Consider the quantitative easing (QE) that he launched in March 2015. Without QE, which involved creating approximately €2.7 trillion ($3 trillion) to help countries like Italy roll over their public debt and stay in the eurozone, the euro would not exist today.

Nonetheless, it is absurd that for every euro that Draghi’s ECB printed to buy Italian public debt, it created two euros to buy German public debt. There was no economic rationale for buying bunds once Germany’s budget surplus rendered them scarce. By continuing to buy them in huge numbers, the ECB created a bund shortage, pushed interest rates into negative territory, and, in the process, inflicted a great deal of damage on German pension funds and insurance companies, not to mention on Chancellor Angela Merkel’s standing with conservative savers.

Was Draghi remiss? Of course not. He labored within absurd political constraints imposed by institutions designed to make it impossible for the central bank to do its job properly. The sole purpose of the “capital key” rule, which forced him to buy German and Italian debt at a two-to-one ratio, was to allow politicians in Berlin to pretend that the ECB was not really financing the roll-over of stressed Italian debt – exactly what was needed to save the euro.

Draghi deserves neither hostility nor adulation for his stewardship of the ECB. He proved adept at working within ridiculous constraints that forced him to do things that no central banker should ever do – and not just against Greece. Maybe a more courageous man would have refused to do those things. But no one can feel anger toward another for not being a hero.

What matters today is that Lagarde will have to labor within exactly the same ridiculous constraints. Sensible Europeans should be very hostile to that reality.

Yanis Varoufakis, a former finance minister of Greece, is leader of the MeRA25 party and Professor of Economics at the University of Athens.