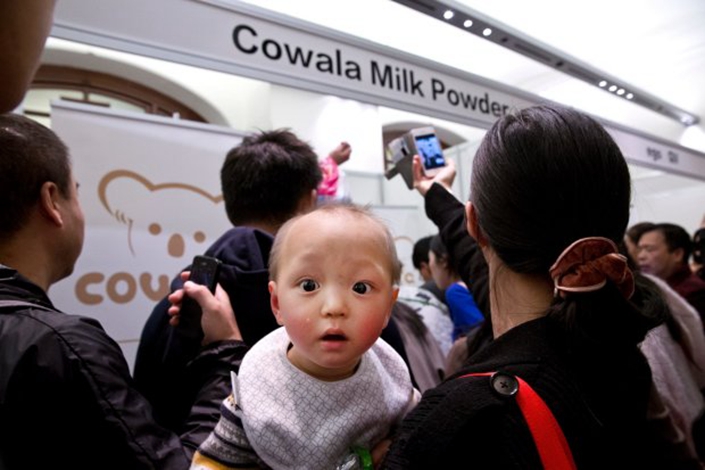 While China has tightened its food safety regulations since 2008, the tainted milk scandal means many Chinese consumers do not trust locally-sourced dairy products, which is driving huge demand for Australian milk and infant formula. Photo: AFR

(AFR) — The father of a girl who became sick during a 2008 tainted milk scandal in China says he will not give up his battle for compensation from China Mengniu Dairy, which owns a majority stake in one of the companies accused of selling contaminated products to consumers.

Guo Li was jailed for five years after being accused of trying extort money from Yashili International Holdings, which is 51.4%-owned by Mengniu. In 2017, however, a court in China’s Guangdong province overturned his conviction.

Guo, who was exonerated after serving his full prison sentence, is now seeking compensation from the courts, the police and Yashili for a nine-year ordeal which he said has left him scarred physically and mentally.

His daughter, who is now 14, was one of 300,000 children who became sick after Chinese dairy companies were accused of substituting a chemical called melamine into infant formula to increase profits in 2008. Six infants died.

The scandal led to an overhaul of China’s food safety laws and put the spotlight on corruption, which was rampant at the time. A number of milk dealers and suppliers were jailed and many of the parents of children who suffered kidney damage were paid off to keep quiet.

In an usual victory for an individual taking on the judicial system in China, Guo’s case was overturned, but he has never been compensated for his years in prison. He says his daughter still has health problems.

Guo says executives and lawyers from Mengniu, the diary giant which is investing heavily in Australia, had refused to meet him despite repeated visits to the company’s offices in Hong Kong and southern China since 2017.

“I feel like an ant taking on an elephant,” Guo, a former interpreter, said in a telephone interview with The Australian Financial Review in English.

“My case is unusual in China. I am pressing for the full package in terms of compensation. I was wrongly sentenced to five years in prison. I was physically and mentally harmed. My daughter is sick.”

After battling to have his case heard for years, Guo said this week he received a court notice saying hearings would commence on Dec. 11 and Dec. 12 in separate cases he has lodged against the judicial system, his one year in police detention and another four years in the prison system.

Guo, who also campaigned on behalf of other parents and made headlines in China and around the world when his case was overturned, was offered 400,000 yuan in compensation by Scient — the company, registered by Yashili, which sold the tainted milk powder. This was on the condition he gave up his right to sue or take further legal action, according to Chinese media reports.

But after his case attracted huge public attention because he was paid more compensation than many other parents, Guo says Scient offered him 3 million yuan in compensation to keep him quiet.

However, a court in 2010 found Guo guilty of seeking to extort money from the company.

It is unusual in China for individuals to win large compensation cases, which are usually settled out of court.

Guo says he still plans to take civil action in Hong Kong against the companies involved. “They want to hide me. Even the police say these companies have a lot of money; they are a money mill,” he says.

Guo says he went to Mengniu’s offices in Hong Kong, where the company is listed, and in the southern Chinese city of Guangzhou in 2017, but no one would see him. He returned after his conviction was overturned, seeking 3 million yuan in compensation plus interest, but still did not make any progress.

He alleges that some of his friends who accompanied him to visit Mengniu were later harassed by Chinese public security officials.

Mengniu did not immediately respond to requests for a comment.

While China has tightened its food safety regulations since 2008, the tainted milk scandal means many Chinese consumers do not trust locally-sourced dairy products, which is driving huge demand for Australian milk and infant formula.

Mengniu did not own a stake in Yashili at the time and was not directly implicated in the scandal.