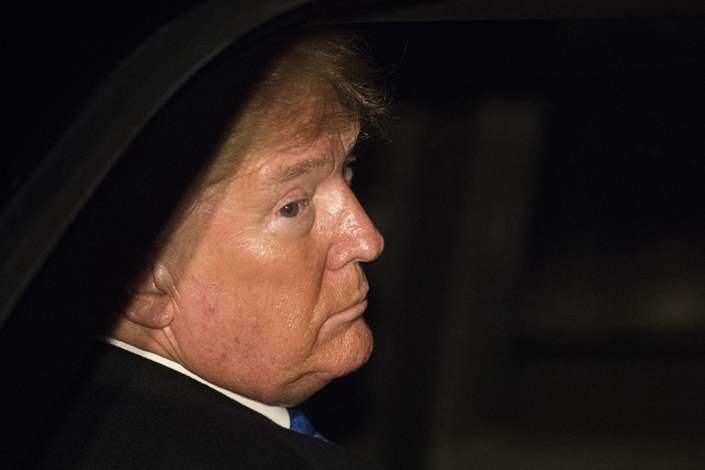 U.S. President Donald Trump leaves a reception in London on Tuesday marking the 70th anniversary of the forming of NATO. Photo: Bloomberg

(Bloomberg) — With a flurry of trade threats across three continents in the span of 24 hours, President Donald Trump reminded financial markets that he’s comfortable heading into an election year using tariffs as his main source of international economic leverage.

“I don’t have a deadline,” Trump told reporters Tuesday in London after one of them asked if he sees phase one of a trade deal with China concluding this year. “I like the idea of waiting until after the election for the China deal. But they want to make a deal now and we’ll see whether not the deal is going to be right.”

The lack of urgency for a truce in the 20-month-long dispute saw Treasury prices jump and sent stocks tumbling across Europe, Asia and the U.S. as investors dialed back expectations for an accord before the next U.S. tariff hike on Dec. 15 that would hit about $160 billion in imports from China including smartphones, toys and children’s clothing. A cease-fire on duties is priced into an equities rally and forms the base case for many economists’ forecasts for a modest rebound in global growth next year.

Commerce Secretary Wilbur Ross, speaking on CNBC television on Tuesday, said the U.S. will go ahead with its plan to add tariffs on Chinese products if nothing changes come mid-December. “There is always the chance of a breakthrough,” he said, adding that while talks continue between the two sides, there’s no big meeting scheduled.

Heightening concern that negotiations for a near-deal will drag out was a report from Chinese state media indicating the government would soon publish a list of “unreliable entities” that could lead to sanctions against U.S. companies.

To be sure, downplaying his desire for a deal and slow-walking a negotiating partner have been calling cards of Trump’s trade strategy.

White House officials have said repeatedly that an initial deal is almost done and people close to the talks reinforce that. Trump, however, has faced political pressure from China hawks in Congress to support protests in Hong Kong and a bill related to Beijing’s crackdown on ethnic Muslims in Xinjiang that was passed by the U.S. House of Representatives on Tuesday.

China’s foreign ministry on Wednesday urged the U.S. to stop the bill and vowed to further respond if it progresses, without providing any details.

Because of those political factors, questions have grown over whether the interim deal, which Trump announced Oct. 11, can be concluded before new tariffs take effect Dec. 15.

The latest barrage of bearish trade news started before sunrise in Washington on Monday, when Trump tweeted unexpectedly that he’s reinstating tariffs on steel and aluminum imports from Brazil and Argentina for what he called their “massive” currency devaluations. In a more anticipated move, the Office of the U.S. Trade Representative later in the day announced plans for tariffs on $2.4 billion of imports from France as retaliation for a new tax that hits American tech companies.

Tucked between those pronouncements was a widely overlooked statement that the trade representative was contemplating increasing the scope of tariffs levied against the European Union (EU) over illegal Airbus subsidies after a World Trade Organization ruling.

In less than two days, investor optimism that Trump’s dovish trade advisers were winning the internal debates started to fade as the president’s more hawkish instincts re-emerged. Underpinning his actions is an apparent belief that his import taxes are having a positive effect.

“U.S. Markets are up as much as 21% since the announcement of tariffs on 3/1/2018 - and the U.S. is taking in massive amounts of money (and giving some to our farmers, who have been targeted by China)!” Trump tweeted on Monday.

Among the biggest risks to emerge was a possible trade conflict with Europe. While the proposed tariffs directed at France are small in comparison to the China levies, a U.S. move on a member of the EU might open Trump up retaliation from Brussels.

On Tuesday, the EU refrained from an immediate reaction to the French tariffs, saying in a statement that the 28-nation bloc “will act and react as one and it will remain united” while “coordinating closely with the French authorities with the next steps.”

Another potential threat to the outlook emanating from U.S. policy is a currency war, in which nations go against their Group of 20 pledges and target foreign-exchange rates for domestic economic benefit. Trump on Monday signaled he wants the Federal Reserve to act to weaken the dollar.

“The Fed should lower rates (there is almost no inflation) and loosen, making us competitive with other nations, and manufacturing will SOAR! Dollar is very strong relative to others,” he tweeted.