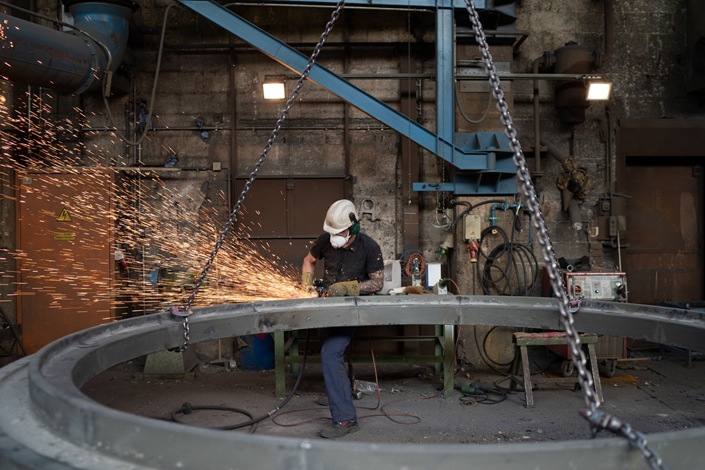 A worker at the Otto Junker steelworks in Simmerath, Germany, on Feb. 19. Photo: Bloomberg

(Bloomberg) — Germany’s machine-makers warned that concerns over investments from China into Europe’s largest economy are at risk of being blown out of proportion.

“We are far from seeing a Chinese takeover wave in German or European industry,” Carl Martin Welcker, president of the country’s VDMA Mechanical Engineering Industry Association, told journalists in Frankfurt on Tuesday. “We in machinery have consistently made positive experiences with Chinese investors” and “don’t see any disadvantage for Germany if the Chinese are guaranteeing our jobs.”

“We’re not naive about it, but we need to be careful that we — I don’t want to speak of hysteria — but that we give things their appropriate weight,” Welcker said.

Welcker was also asked about the association’s stance on German investments in China, particularly in the northwestern region of Xinjiang where foreign news outlets and human rights groups have reported physical and psychological abuse there of a Muslim ethnic group on a massive scale.

“We fundamentally believe that the economy isn’t an arm of politics,” Welcker responded. “Every company must decide when it invests somewhere whether the conditions — at least in their own factories —are in line with human rights standards. I assume that machine makers do that,” he said, adding that only few of the association’s members are active in Xinjiang.