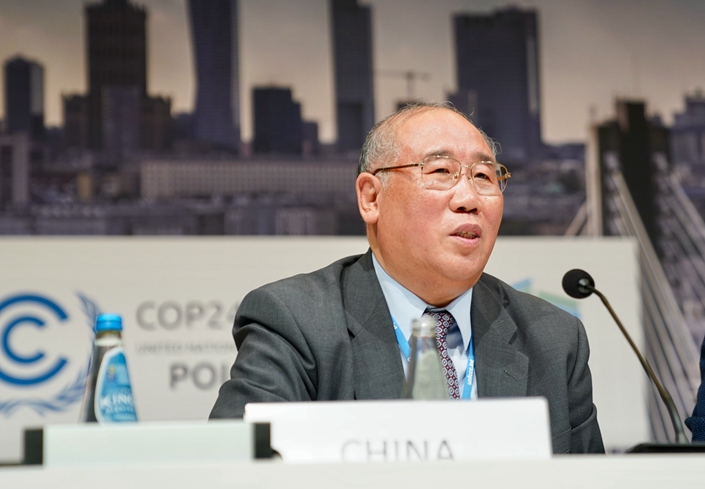 As this year’s U.N. climate talks ran into the final day, China’s vice environmental minister, Zhao Yingmin, made his debut as the new head of the Chinese delegation, meeting with his counterparts from other countries and environmental organizations, as well as chairing events.

He replaced Xie Zhenhua, China’s climate negotiator for over a decade. There’s unlikely to be an official announcement but multiple sources have told China Dialogue that Xie has left his position as the country’s special representative on climate change. Xie has steered China’s climate diplomacy since 2007, and has been critical to forging agreement on international climate action to avoid dangerous global warming.

China has become the world’s largest annual emitter of greenhouse gases over the past decade. Yet in that time the country has also shifted from stubbornly defending its right to uncontrolled emission growth to actively embarking on a low-carbon path. That transformation has become a national strategy and Xie’s personal role as a facilitator has been indispensable according to former colleagues, fellow negotiators and civil society representatives.

‘The right to development’

Xie became vice chair of China’s top economic planning body, the National Development and Reform Commission (NDRC) in 2007. The NDRC was also in charge of climate policy until these powers were moved to the Ministry of Ecology and Environment (MEE) in 2018 as part of wide-ranging ministerial changes.

Xie is known as a candid, tough negotiator in international climate talks. At the Durban climate summit in 2011, he repeatedly banged on a table over what he believed were hypocritical demands by rich countries to get China to accept binding emission reduction targets. The moment was widely broadcast on Chinese television.

The scene set the tone of Xie’s early tenure as China’s top climate diplomat: a tenacious negotiator in defense of “China’s right to development.” In the years before and immediately after the fateful 2009 Copenhagen climate talks, China engaged with industrialized nations in fierce, sometimes disparaging debates over how the burdens of addressing global warming should be shared. The impasse between the U.S. and China, which jointly emitted nearly 40% of the world’s greenhouse gases that year, was particularly fiery. The deadlock resulted in a political statement and a resounding sense of failure rather than a binding deal.

The accounts of Copenhagen by China and the U.S. were bitter. Xie criticized rich countries for “conspir[ing] to divide developing nations,” while his counterpart Todd Stern, who served as U.S. special climate envoy from 2009 to 2016, described the summit as “snarling, aggravated and chaotic.”

Despite the difficult start to their working relationship, Xie and Stern developed a personal bond. They visited each other’s hometowns of Tianjin and Chicago, watched a baseball game together and described each other as “old friends.”

“He’s colourful and interesting, has a sense of humor and loves to laugh. I kind of liked him right away,” Stern told China Dialogue.

Stern added that China and the U.S. came to climate negotiations from very different places, making it natural for Xie and himself to struggle through various issues — even to bang heads — but over the years they learned where each other’s red lines were. “He really understands the issues. He is very protective of what he sees as China’s interests,” Stern said.

Xie was instrumental in the process of China and the U.S. reaching a consensus on emissions targets in 2014, which then paved the way for the Paris Agreement. According to Xie, the key to that accord is “that each country would decide on their own targets … which put both sides at ease.”

Stern described Xie as a tenacious negotiator and a good listener. These qualities helped him win the trust of his counterparts in other major developing countries, enabling him to smooth things out when negotiations entered critical phases. “He was able to persuade other developing countries. I guess there’s no one more influential than him,” Stern said.

In the final hours of last year’s climate talks in Katowice, Poland, discussions on rules to implement the Paris Agreement came to a deadlock when countries could not agree on provisions for a global carbon market mechanism, due to opposition from Brazil. The whole package was in danger of collapse under the usual practice at U.N. negotiations that “nothing is agreed until everything is agreed.”

In an interview with China Central Television, Xie said the conference chair had entrusted the Chinese delegation to communicate with other parties. “After six-hour discussions … we were able to overcome the last obstacle for reaching a compromise,” he said of the decision to move the carbon market discussions to this year’s climate summit to allow the Paris rulebook to pass.

Stern said that while Xie was protective of national interests — as every negotiator would be — he also cares deeply about the environment. “We might have had very different views on what needed to be done, but I never doubted that he came to the negotiations caring about climate change and wanting things to be done,” he said.

Within China’s climate community, Xie is known for a personal commitment to the issues that goes far beyond the negotiating table. He visited small island nations, including Tuvalu and Fiji, as well as the polar regions. “I have witnessed climate impact on glaciers and the suffering of polar bears,” Xie told Tsinghua students in a recent speech.

During his tenure, China’s stance on climate has shifted increasingly from a defense of its “right to emit,” to a promotion of low-carbon development as a national strategy.

The old narrative that dominated Chinese media around 2009 — that climate change was a conspiracy by developed countries to contain the country’s rise — effectively disappeared in subsequent years. It was replaced by a growing call for an “energy revolution”, entailing a massive deployment of renewable energy and a decisive break from burning coal.

Coal consumption in the past two years has rebounded but not returned to the level seen in 2013-2014, which many experts believe was a peak that China will not return to. Furthermore, coal’s share of the energy mix in China has dropped sharply from 72% in 2005 to 59% in 2018.

Such a major shift in energy policy is not one man’s making. It coincided with a worsening air pollution crisis that pressured China’s leadership into bold emission cuts. But observers, including former colleagues in government that asked not to be named, believe that the changes would have been unimaginable without Xie’s contribution.

As vice-chairman of NDRC, Xie was able to leverage the international pressures he was personally exposed to and push for changes to mainstream climate policies at home. As a ministerial-level official, his personal commitment carried weight in key policies such as the creation of a national carbon market, the observers said.

“Xie’s career will be remembered for his leadership and dedication to the sustainable development of the country,” said Li Shuo, senior global policy advisor with Greenpeace East Asia. “His effort evidences the power that a committed individual can have to create change and to shape the world’s perception of China. That is perhaps his greatest legacy.”

The failure of Copenhagen also made China rethink its approach to international talks. Under Xie’s tenure, a mechanism was established for Chinese delegations to have routine dialogues with civil society and media outlets both in China and abroad.

“Chinese climate negotiators [before Xie] were not completely inaccessible, but it was usually up to their personal preferences: some were willing to talk, others not,” said a veteran nongovernmental organization (NGO) observer who has participated in international climate talks since 2004 and preferred to remain anonymous. “But under Xie, a mechanism has been set up to make sure such dialogues would happen every year, which greatly boosted mutual understanding between China and the international community,” she said.

According to Bi Xinxin, then coordinator of Climate Action Network’s China chapter, the NDRC at that time “lacked the necessary bottom-up support and experience to mainstream climate change policy and promote low-carbon development.” This made it willing to hear practical experience from international civil society organizations, he added.

“The dialogue extends to domestic topics such as climate change legislation, progress on low-carbon city pilots and China’s recently initiated emission trading systems,” Bi wrote, referring to the pilot of regional carbon markets that paved the way for the national market.

Xie has been willing to answer questions and has held media briefings at the annual U.N. climate talks. Such accessibility is rare among ministerial officials in China and has set a precedent that many believe increases the transparency of Chinese climate policymaking.

Who is Xie’s replacement?

Xie’s career as a senior climate diplomat has come to an end, but he has not left the stage entirely. In 2017, he donated the prize money from his Lui Che Woo award to his alma mater Tsinghua University in the hope that the HK$20 million ($2.55 million) would help foster the next generation of climate leaders in China. He currently serves as the president of the university’s Institute of Climate Change and Sustainable Development.

The mantle of head of the Chinese delegation has been passed on to Zhao, the vice minister. But a number of observers have questioned whether China’s leadership will retain a special representative for climate change, a position that carries a broader mandate and greater diplomatic flexibility than vice minister. This could affect China’s climate diplomacy at a time when most countries must deliver a steep change in their commitments to reduce emissions to meet the Paris Agreement upper limit of 2 degrees Celsius for warming.

Zhao was a former aid and protégé of Xie when the latter worked as director of what was then the State Environmental Protection Administration in the 1990s. Zhao oversaw departments managing environmental standards and pollution prevention before becoming vice minister in 2016. It is yet to be seen whether Zhao will approach the media and NGOs with the same openness and enthusiasm as Xie.

However, some observers have noted that the Ministry of Ecology and Environment has less capacity to influence decision-making on the transformation of China’s energy system than the NDRC. Although the ministry has built a strong team to supervise compliance in recent years, carbon emissions are not yet regulated as pollutants in China.

As China faces increasing economic challenges at home, there have been worrying signs that coal is making a comeback. More than ever, a strong senior figure is needed to make the case for climate action in internal government discussions and represent China at a crucial stage in global negotiations to raise ambition.

Li Jing is a freelance writer covering environmental and climate issues. She was a visiting journalist fellow at the Reuters Institute for the Study of Journalism at the University of Oxford. The article was first published on China Dialogue.