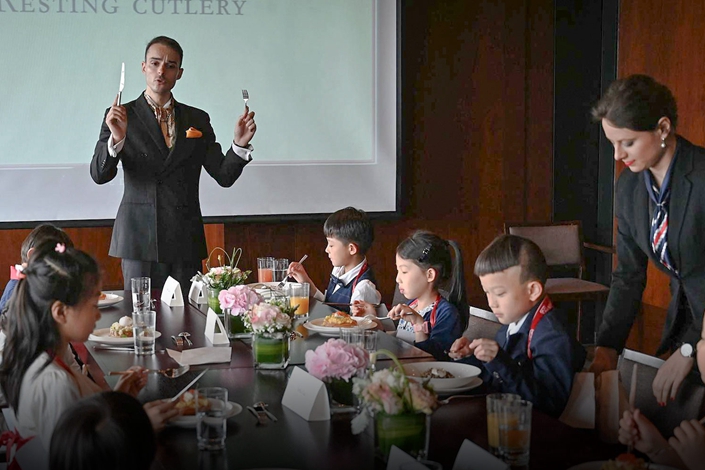 Guillaume de Bernadac teaches children how to use cutlery during an etiquette and manners lesson in central Shanghai, June 1. Photo: Hector Retamal/AFP/VCG

(Sixth Tone) — I took my first step into ethnographic fieldwork in pearls, a black lace dress, and suede heels, with every comment my parents ever made about my posture flashing through my mind. I lifted my head up high, extended each vertebra in my spine, and gently tucked my left ankle behind my right.

From my vantage point at the edge of the room, I watched as a group of well-dressed Chinese women practiced the finer points of French etiquette. They were practicing how to eat without moving their elbows too much, and each woman had a piece of A4 paper pinned between her arms and ribs, forcing them to only make controlled and subtle movements. I listened quietly as they chuckled to themselves with each blunder.

In the summer of 2015, I had come across an article titled “Why Are Wealthy Chinese Learning Western Etiquette?” The piece listed a number of new etiquette schools that had recently popped up in Shanghai, promising to teach wealthy residents everything from how to stand elegantly to how to properly use a napkin.

I was curious. I grew up in China but had attended international schools all my life. Despite my hybrid upbringing, however, I don’t recall ever being formally or deliberately taught non-Chinese etiquette. What does it even mean to “learn etiquette”? Was it like learning another language, where one would memorize the grammar and practice until it became habit? Was it superficial mimicry, or could learners truly integrate it into their daily lives? And can two etiquette systems coexist? Or does truly mastering one necessarily entail forgetting the other?

Etiquette classes in China come with hefty price tags, often starting from just under 4,000 yuan ($570) for a daylong course to up to 100,000 yuan for a full 12-day program. In classes ranging from daily deportment to high-society dining customs, participants learn how far the main plate must be placed from the table’s edge and why the British set their forks face-up, while the French prefer theirs face-down.

The primary clients of China’s etiquette academies are young and middle-aged women of the Chinese elite. This isn’t surprising: Women, regardless of where they’re from, traditionally face more pressure to maintain appearances. Words like “lady” and “graceful” appear frequently in such academies’ publicity materials, in which they position their courses as a means of cultivating one’s taste and disposition.

Viewed positively, etiquette academies empower their elite female clients in both their social and professional lives. Women come to them to learn how to host dinner parties — not for their husbands’ clients, but to expand their own social networks. The director of one academy emphasized how self-improvement was at the core of the school’s courses: Mastering proper etiquette means knowing how to carry oneself in a wide range of different social situations.

Another keyword that frequently pops up in China-based etiquette academies’ branding materials is “authenticity.” This can be seen in their names and the courses they offer: Institute Sarita’s courses are modeled on its founder’s education at prominent Swiss finishing school Institut Villa Pierrefeu; Seatton touts its British background; and Guillaume Rué de Bernadac, the founder of the French-styled Academie de Bernadac, prides himself on his lineage — his grandmother and great-grand father tutored the royal Moroccan court in etiquette, he says.

Chinese are not unique in studying other cultures’ social graces. In the 16th and 17th centuries, the French nobility adapted behavioral codes from Renaissance Italy, and two centuries later, the British aristocracy proved zealous students of French etiquette.

Chinese consumers’ interest in foreign etiquette is part of the country’s broader embrace of cultural imports over the past four decades. Since the late 1970s, the country’s reform and opening-up policy has given Chinese access to an unprecedented array of foreign goods, services, and culture. Western etiquette academies have emerged in tandem with Chinese consumers’ growing appetite for international exchange. Especially in large cities like Shanghai, etiquette gives Chinese elites the confidence to move in cosmopolitan circles as they flit from embassy-sponsored cultural exhibitions to dinners at expatriate-owned restaurants.

The women I spoke with at one etiquette academy in Shanghai all either have or previously had successful professional careers in fields ranging from interior design to international business and media. They attributed their decisions to take etiquette classes partially to their own professional or travel experiences abroad.

One interviewee, the owner of a design company, told me she frequently visits Europe and sees mastering etiquette as crucial to building good business and social relationships there. Others expressed interest in knowing how to navigate office cocktail parties or dinners hosted by their European friends. A few recalled embarrassing social gaffes from their travels abroad and said they hoped to learn how to avoid such awkward situations in the future.

And because fluency in Western social etiquette has become a status symbol for aspiring citizens of the world and a tool for gaining global social mobility, many of my interviewees not only wished to master it themselves, they also hoped to school their children in it as well. About half of my interviewees had young kids who attended etiquette classes. Some said they wanted their children to study abroad one day and hoped that learning foreign etiquette from a young age would help their kids make friends and integrate more easily.

Despite the pride and joy they took in their children’s growth, I also detected underlying anxiety among the parents I met. With my international educational background, I was seen as an example of what their children might one day become.

My interviewees asked me: How often do you come back to China? Do you talk to your parents in English or Chinese? Do you feel at ease talking to them? Like other Chinese parents, they were simultaneously worried that their children would become detached from them and hopeful that their children could experience more of the world.

This led me to a counterintuitive finding: The wealthy parents of etiquette academy students were not trying to self-whitewash. On the contrary, they continuously stressed that their children must remember their Chinese roots.

To my surprise, many participants at the academies I visited showed a deep awareness of, and appreciation for Chinese Confucian etiquette. One woman, for example, told me she had tried hosting traditional etiquette classes for her children, though she had to give up when she couldn’t find a qualified teacher.

Indeed, many noted the challenges involved in pursuing an education in traditional Chinese etiquette. Using the term “wenhua duanceng,” or “a period of cultural discontinuity and rupture,” they talked about the convulsive changes China has undergone over the past few decades. Traditional Confucian culture was rejected as reactionary during the Mao era, and its suppression cost it the chance to evolve and adapt to modern life.

Although it may seem radically different from traditional Chinese etiquette, many of my interviewees viewed adapting Western etiquette as a way of filling the void left by this rupture. According to them, etiquette — whether Chinese or Western — embodied and drew forth supposedly traditional Chinese values such as self-restraint and respect toward others, which they believed are innate to the Chinese character.

“We do not lack etiquette in our bones,” one woman emphasized, positioning etiquette as something intrinsic and inherent to being Chinese, just waiting to be kindled.

In recent years, the Chinese government has sought to promote a revival of traditional culture and Confucian values. These campaigns call upon citizens to draw from traditional history and culture to reinsert Chinese elements into family and public life.

This revival was welcomed by many of my interviewees. They saw it as a way to elevate the “suzhi” — an expansive and somewhat classist Chinese term that covers an array of ideas from literacy to politeness and public-mindedness — of Chinese citizens. And in their view, because it prompts people to be more mindful and respectful of others, learning etiquette is conducive rather than antithetical to the idea of reviving Chinese-ness.

While to an outside observer, it may seem as though foreign etiquette classes are mere mimicry in which participants do little more than repeatedly practice elegant ways to sit down and stand, the truth isn’t so straightforward. It’s a complex and seemingly paradoxical process. On one side, etiquette has become a tool for empowering China’s increasingly mobile and globalized elite. On the other, it’s a way for them to produce — or reproduce — a Chinese essence in which they adapt what they learn in the academies and fuse it with their understanding of Chinese values.

This dual meaning was mirrored in the graceful gestures of my interviewees: Etiquette wasn’t just a matter of picking the proper spoon, it had become a way for them to pick up the pieces of their heritage.

Jennifer Guan is a master’s candidate at Paris’ Sciences Po and holds a degree in anthropology from the University of Cambridge.