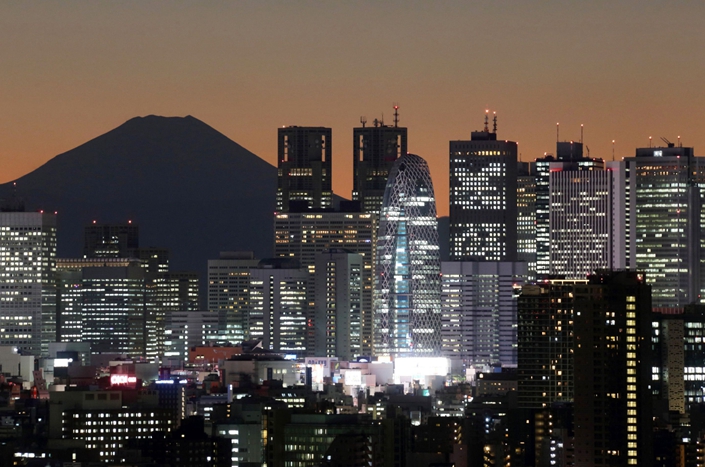 The sun sets behind buildings in front of Mount Fuji at dusk in Tokyo, Japan, on Dec. 12, 2013. Photo: Bloomberg

(Bloomberg) — Japan widened its lead over China as the largest foreign owner of U.S. Treasurys as its holdings rebounded to the second-highest level since 2015, while China’s stake was little changed.

Japan’s holdings of U.S. notes, bills and bonds increased to $1.17 trillion in October from $1.15 trillion a month earlier, the Treasury Department said in a report Monday. Japan overtook China as the largest non-U.S. holder of Treasurys in June — the first time it’s held that position since May 2017.

China was the second-largest foreign creditor in October, with $1.10 trillion in holdings. That’s the smallest amount since April 2017, the data showed.

Japan’s holdings of U.S. securities have been rising over the past year amid a growing global pool of negative-yielding debt. The total was above $13 trillion at the end of October, down from a peak of roughly $17 trillion in August. That’s made Treasurys more attractive to some overseas investors, given that U.S. debt offers some of the highest yields in developed markets.

Yields on benchmark 10-year Treasury notes have risen from multi-year lows to trade near 1.88% on Monday. The rate on a similarly dated Japanese government bond is just below zero, despite rebounding in recent months.

Total foreign ownership of Treasurys was little changed after posting the biggest monthly drop since 2017 in September. Overall foreign holdings of U.S. debt climbed $1.6 billion to $6.78 trillion in October.