From Scrubland to Ski Slopes: China Gets Ready For the Olympics 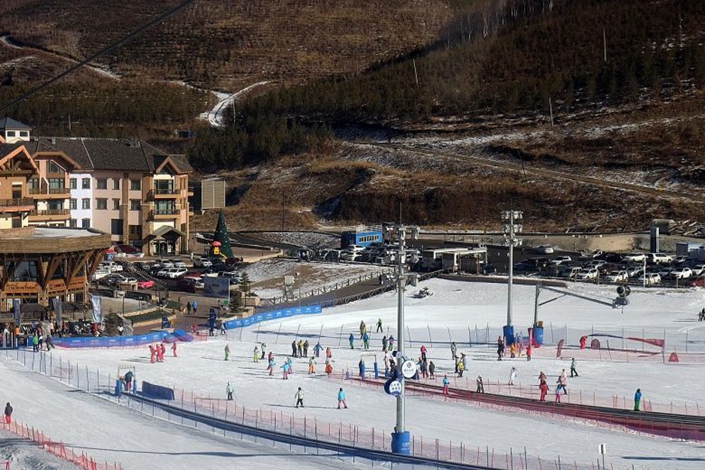 Thaiwoo Ski Resort, one of four ski resorts in Zhangjiakou’s Chongli district, will be the site of the athletes’ village and other non-competition venues for the 2022 Winter Olympics. Photo: Danson Cheong

(The Straits Times) — Just outside the Chinese capital of Beijing, in the nearby city of Zhangjiakou, brown scrubland is being transformed into ski slopes carpeted with powdery snow.

Alpine cottages are replacing rural farmland, and the drone of ski lifts is becoming a part of everyday life as China puts the final touches to preparations for the 2022 Winter Olympics.

Zhangjiakou is one of three competition zones — the others are in Beijing and in Yanqing, a suburb on the outskirts of the capital — for the upcoming Winter Games, and both officials and businesses hope the event will be a boon for the region’s economy, and place the city among the ranks of the world’s top skiing destinations.

On a trip this month to competition venues, officials and ski resorts showed off newly built facilities and pristine ski-ready slopes.

Lodging for more than 2,700 athletes was under construction just outside the high-end Thaiwoo Ski Resort, and mountain sides were being cleared of vegetation to build slopes for Olympic events.

This month, a new high-speed rail connection will also open, cutting travel time from Beijing to under an hour. The 200 kilometer (125 miles) journey now takes about three hours by car.

Zhang Chunsheng, head of Zhangjiakou’s publicity department, said the city was a natural choice for the Olympics — four out of China’s 10 ski resorts are located in the city’s Chongli district.

The area is also a haunt for Chinese leaders who travel from Beijing to ski, including Foreign Minister Wang Yi, according to city officials.

“China is not just (organizing the Olympics) for sports, it is also holding the Games to boost its economy and the development of the surrounding region,” said Mr Zhang, noting that Beijing would be the only city to have hosted both the Summer and Winter Games.

But Beijing’s hosting of the Winter Games has some questioning the wisdom of holding the winter sports meet in a region that hardly snows.

Zhangjiakou receives about 40 centimeters (15.7 inches) of snow on average each year; in comparison, Davos in Switzerland gets more than 10 times that — over 468 centimeters of snow annually.

But China isn’t letting nature get in the way — man-made snow will provide the powder for the ski and snowboard events.

At the Thaiwoo Ski Resort, which will be the site of the athletes’ village and other non-competition venues for the 2022 Winter Olympics, snow cannon turn water into the white powder that covers the resort’s 31 slopes.

The resort’s brand general manager Nie Ningning said that the resort “seized the opportunity” and opened in 2015 after Beijing was awarded the rights to host the Games.

“The Olympics have brought a lot of opportunities and helped develop this entire region,” she said, adding that the area around the resort used to be a poor farming area, but now most locals were employed in the hospitality and winter sports industry.

She added that the goal was for the area to become as well-known as ski resorts in Davos and in Whistler in Canada.

The city is also drumming up interest in winter sports ahead of the Games, and has launched skiing classes in elementary and middle schools.

Children aged under 16 also ski for free at the city’s ski resorts, said An Yanzhi, section chief of the city’s leading group in charge of preparations for the Winter Games.

“They call (winter sports) white opium; it’s very addictive. A lot of students say this after they’ve tried it,” she said.