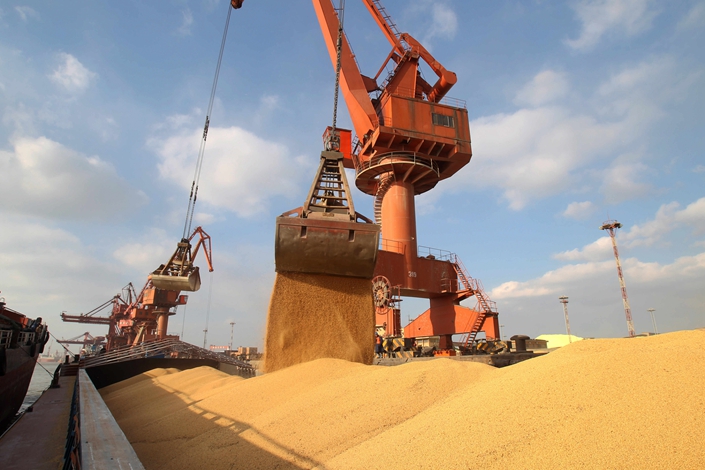 The U.S. and China have reached agreement on a phase one trade deal, including what U.S. officials say are pledges by China to boost their imports of a host of U.S. agricultural commodities to $40 billion annually over two years — an additional $16 billion of buys on top of the $24 billion China purchased in 2017 before the trade war began.

According to U.S. Trade Representative Robert Lighthizer, China will try to get to $50 billion, the upper end of the range of U.S. commodity buys that U.S. officials have been talking about for weeks. But Lighthizer also said the list of commodities would not be disclosed. But Chinese officials indicated they would make purchases of corn, wheat, cotton and rice. Plus, officials said pork and poultry were two commodities of great importance as the country seeks to shore up its supplies of those proteins. They would not comment on the total dollar value and said purchases would not disrupt the Chinese market.

There are several uncertainties in this situation, including the shifts in global trade that would take place under the purchase levels in the accord. And with enforcement language relative to phase one commitments, volatility will still be the rule if China does not follow through with the agreement language.

There other uncertainties. Will the purchases include equipment, including farm equipment? What will be the specific “year” for the purchases? Could China open its state reserves for commodities once the domestic needs they have identified are met? Could some of these commodities end up being utilized by China as aid to other countries at some point? These are just a few that could impact the eventual outcome.

IEG Vantage performed a scenario analysis to project maximum value of soybeans the U.S. could potentially export to China in first year of this trade deal. There are several assumptions made, including the volume of China’s U.S. soybean purchases in this scenario are not influenced by projected import demand nor price competitiveness of other origins. Assuming an average soybean price of $10 per bushel ($367 per ton) during 2020, U.S. soybean exports to China could reach $24.2 billion or potentially surpass $25 billion with additional price strength. If China were to lift tariffs and begin purchasing U.S. soybean oil at near or above maximum volumes achieved over the past decade, U.S. soybean product exports to China could also exceed $500 million in 2020 by shifting exported volumes away from other major destinations.

The amount of pork forecast to move into China over this next year could vary greatly given the tariff level finally established by China over U.S. pork. This year has been unprecedented, with total volumes to China likely to end 2019 with a new record. Volume could certainly approach 900 million pounds, compared with the prior record year of 851 million pounds in 2008. U.S. exports to China in 2020 are expected to set new records, almost regardless of tariff level, but the magnitude will certainly be impacted. Volumes could approach 1.4 billion pounds into China, possibly getting to $1.2 billion. If tariff reductions come as part of the trade pact, it would spur additional pork trade. It is conceivable that China could take $2 billion worth of U.S. pork in 2020, surpassing Mexico as the largest destination for U.S. pork but would likely come at a cost to other trading partners.

The highest annual volume of U.S. corn imported into China was in 2012, when 5.11 million tons of corn was purchased. Using 2012 as an analog year and current corn prices, U.S. corn imported for feed use in China is projected to worth about $781 million. The highest annual volume of U.S. sorghum imported into China was in 2015 at 8.97 million tons, representing a value of about $1.2 billion at today’s prices. Collectively, China could import around $2 billion worth of corn and sorghum from the U.S. in 2020. China's purchase of U.S. distillers’ dried grains could potentially be worth up to $975 million, using 2015 as a year of reference where China imported about 6.82 million tons of U.S. distillers’ dried grains.

Ethanol has been cited to be part of the trade agreement. China could purchase up to 133 million bushels of U.S. corn for ethanol use in 2020, which is equivalent to about 386 million gallons of ethanol. This represents about $516 million worth of U.S. corn for ethanol in 2020. China’s purchases of U.S. wheat could amount to about 3.82 million tons in 2020, using 2013 as an analog year. This could translate to about $650 million worth of U.S. wheat purchases at today’s prices. We expect the equivalent exports of U.S. cotton to China from February 2020 to January 2021 to be $1.3 billion. That was the third-largest dollar value for our traditional agricultural products.

The top five imported U.S. dairy commodities — skim milk powder, whey, cheese, lactose and infant food preparations — made up 98% of U.S. dairy product exports to China in 2019. If the U.S. were to provide 15% of China’s skim milk powder imports, they would be valued at $130 million in 2020. Additionally, the U.S. was the source of more than half of China’s whey imports in 2016 and 2017. When the tariffs were levied, China had to look elsewhere for whey products. The goal in this market would be to reestablish the U.S. as the main source for whey and capture 60% of the market share. This would translate to just over $200 million in whey exports for 2020. When cheese, lactose, and infant food preparations are added into the trade mix, total dairy exports to China in 2020 could top $600 million.

After being shut out for nearly five years, U.S. poultry exporters have regained direct access to China as a part of the phase one trade deal. For 2020, China could potentially increase its import program to be more inclusive of U.S. poultry, at this point, expectations are limited to an additional $700 million in exports for U.S. poultry.

An agreement announced in February this year allowed U.S. milled rice including husked (brown), semi-milled, or wholly milled (white), and broken rice to China, but does not allow market access for U.S. rough rice or paddy rice exports. It is unclear, however, how much U.S. rice China could import. The first announced U.S. exports of rice to China came in July with two containers (40 tons) of bagged medium-grain milled rice shipped out of California. China’s primary import sources remain Vietnam, Thailand and Cambodia, which have significant price and logistical advantages over the United States. Chinese imports of U.S. rice are expected to be negligible, but insignificant purchases as a sign of goodwill are a possibility.

Ultimately, this is a difficult exercise with all sorts of uncertainty. With that said, $40 billion in the first year of this trade agreement is difficult to get to with the scope examined. Such things as leather and hide, wood and wood pulp, farm equipment, etc. could significantly expand the figure, with forest products one of those alluded to by Lighthizer in an interview with Fox Business News as a way to get to the lofty numbers. Additionally, even moderate changes in incremental demand from this trade deal could create significant disruption and price escalations in U.S. markets.