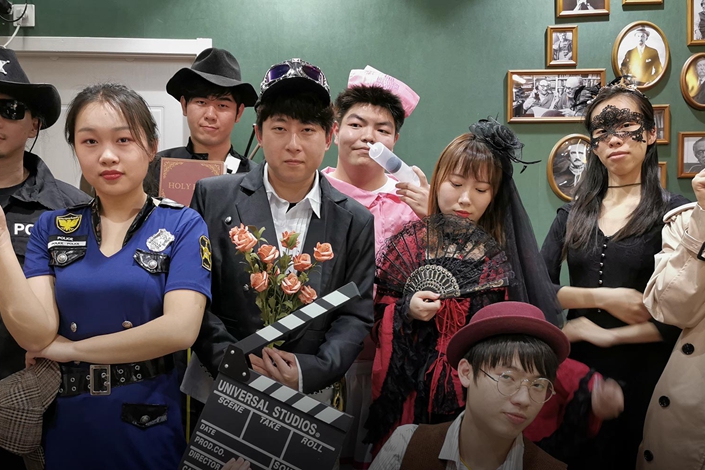 Jiang Yunchuan (crouching in front) and his friends pose for a photo on May 15 before starting their script murder “Blood-Red Wedding” in Shanghai. Photo: Courtesy of Jiang Yunchuan

(Sixth Tone) — The crucial clue was hidden in Wang Wenjia’s room: Snuck among a row of shoes was a pair of heels with bloodstained soles. Their imprints perfectly matched the footsteps she’d seen at the dimly lit crime scene.

Following the trail of clues, the 30-year-old was shocked to discover she had been the murderer all along: The android she’d destroyed in a fit of rage had really been an innocent robotics scientist.

“I only found out at the end — I killed the wrong person,” Wang tells Sixth Tone. “Not only that, all the people I thought were human turned out to be robots.”

Wang, a Shanghai-based news editor, had been playing a game of “jubensha,” or “script murder,” a role-playing murder mystery activity that has become highly popular among young urban Chinese.

Sessions of script murder, which take place in specialist escape room-style venues, cost up to 300 yuan ($42.68) per person and take over four hours. Players are each given a character with a complex backstory and costume, and are then thrown into an immersive environment to rummage around for clues and interact with other characters as they attempt to solve a crime.

Hundreds of such centers have opened across China since 2016, and the game genre can also be enjoyed on smartphone or through the popular reality TV show, “Who’s the Murderer,” in which groups of celebrities try their hands at sleuthing. But the industry’s rapid growth is also creating problems, as venues steal each other’s storylines and create evermore extreme, explicit and macabre content in a bid to attract customers.

The murder mystery craze first spread to China through Mafia — the deceptively simple social deduction game in which players with secret identities try to identify the killers among them — which was invented in Russia during the 1980s. It’s not clear when the game caught on in China, but Zachary Mexico’s book “China Underground” describes all-night Mafia sessions in seedy smoke-filled venues in the mid-2000s.

Game makers have said the transition from Werewolf to more complex plot-driven murder mysteries occurred around 2015, after pirated versions of Western box set games began making rounds in China’s board gaming circles, especially a hospital-themed game called Death Wears White. This inspired people to begin writing their own Chinese-language games, which they referred to as “scripts.”

In 2016, “Who’s the Murderer” premiered on the online media platform Mango TV, giving the murder mystery genre a greater audience and valuable media coverage. Building on the existing popularity of Werewolf, cosplaying, and escape room activities, venues across China started offering to recreate the experience of “Who’s the Murderer.” Script murder was born.

Script murder has since blossomed into an industry in its own right, with career scriptwriters, game hosts, box set publishers, and venue developers. More than 3,000 Chinese scripts have already been published. In November, 130 murder mystery companies congregated at the International Mystery Game Expo in Shanghai, one of several trade events hosted in the country this year.

Some fans dedicate enormous chunks of their spare time to script murder. Among the products exhibited at the expo was a murder mystery app allowing players to role-play via group voice calls. The young woman at the stall said she’d played over 110 different murder mysteries on the app, with games lasting up to seven hours.

Wang has played about a dozen different script murder games with groups of friends at entertainment venues in Shanghai — and many more online.

According to Wang, script murder is a fun group activity because there’s a little something for everyone: dressing up, hunting for clues escape room-style, acting and deducting. It’s also good for breaking the ice, which is making script murder a popular choice for corporate team-building events, she said.

Others see murder mystery as educational. Kong Yuqing, a Shanghai-based teacher, started playing script murder with her family after watching “Who’s the Murderer.” She said the games help train acting and critical thinking skills. They also flip traditional social roles: Playing with family, a daughter may suddenly have to role-play as her parents’ mother.

“You wear costumes when you’re playing script murder, so it feels like acting out a TV drama,” Kong said. “You feel like you’re really in that world.”

The games also require a good memory. As competition among script murder venues increases — there are now more than 200 murder mystery centers in the southwestern city of Chengdu alone — companies are creating wilder and more complicated stories to gain an edge.

At lightning speed, Wang rattles off some of the roles she’s played. In medieval Europe, she was a fraudulent astrologist who gathered secrets using money and sex. In ancient China, she appeared as an ambitious and devastatingly beautiful imperial concubine. Once, she was a real estate tycoon who bought a castle full of time portals, leading her to solve mysteries across multiple dimensions.

“Ugh,” she cries with exaggerated frustration. “You even had to work out whether it was actually you — in another time period — who had committed the murder. It was so interesting!”

The rush to create increasingly extreme and salacious content, however, is also attracting criticism. In September, an article by Game Seer, a tech and gaming news media outlet, described a script murder in which one character — played by a staff member — told players to describe how they would go about pleasing her sexually, in order to receive a clue. Multiple venues have received negative reviews online for hosting similar scripts.

“No one is currently checking these scripts, whether they’re OK or not,” said Liu Shilei, a murder mystery game creator from Southwest China’s Yunnan province. “They can be antisocial, anti-human, pornographic and violent.”

Wang said she generally just skims over passages that are too graphic. In one extreme game, she played a demon that possessed a woman and used her to murder a man by poisoning him as he was ejaculating. In another, she was a Japanese bar owner whose teenage daughter killed herself after being sexually abused by her principal.

“One-night stands, pedophilia, violence … I think these are in every script,” Wang said. She adds that truly over-the-top stories are relatively rare and don’t offend her — she sees them as an attempt to spice up plots and keep things unpredictable.

Industry insiders, however, worry that rogue scriptwriters pose a genuine threat. Jiang Yunchuan, the organizer of the Shanghai expo, told Sixth Tone there’s no way to prevent minors from being exposed to R-rated scripts. Highly sexualized scripts can also cause deep social embarrassment, especially among mixed groups of strangers. “Sexual content, violence, piracy: These are some of the bigger hidden dangers that we face as an industry,” Jiang said.

Liu, the Yunnan-based game-maker, worries that off-color scripts are painting his industry as pornographic and could even cause a government clampdown. He points to a gay erotica writer who was sentenced to 10 years in prison for “producing and selling pornography” last year.

Some scripts also cause harm by spreading reactionary values, such as misrepresenting the LGBT community as sexual deviants, Liu added. “If I release a violent and bloody script that has strongly antisocial elements, if it slips out into the market, would it not then have a bad influence?” he said.

Liu takes his social responsibilities extremely seriously. For him, role-playing should be about helping players gain greater understanding and empathy by exploring alternative identities. One of his games is based on “The Diary of a Young Girl” by Anne Frank.

“We wanted to communicate an anti-war message,” Liu said. “In the end, Anne Frank dies in the concentration camp. Then, Chinese players can feel the weight of that period of history and understand that peace hasn’t come easily.”

Other companies share Liu’s attitude. Sixth Tone played another game about the death of a maligned old woman in a village. It ended with a plea by the narrator for players to cherish their aging parents — a pressing issue in Chinese society, where the elderly are often left behind in rural areas while their children work in the cities.

No matter their values, however, China’s scriptwriters are all affected by the rampant piracy in the industry. Liu said that within weeks of releasing his first game, he found it being distributed for free online. Every game he has since created has also been pirated, and he believes the thieves make far more money than he does.

“Every industry has its original sin: In the game industry, it’s fake things — piracy,” Liu said. “Because our industry rose out of pirated products, it’s resulted in players thinking they don’t need to pay for games.”

For creators, the blatant rip-offs can be severely discouraging. Liu said he considered quitting the industry after seeing his work online, but his fans convinced him to continue. “It felt like my child had been abducted by strangers, because this (script) is your sweat and blood,” Liu said. “I was really upset.”

These days, Liu tries to protect his work by registering his products under copyright, and his online store on the social app WeChat displays a large anti-piracy notice. Other publishers, however, feel they can only shrug.

“This problem (piracy) is very serious in China,” Wang Zhe said, owner of a murder mystery game company in the eastern city of Qingdao. “But bearing in mind how things are in China right now, we don’t really mind — or at least we’re just numb to it. There’s no way I could fix this problem.”

For Wang, the constant copying also has its upsides: It has introduced many people to the game genre and his business. One of his scripts — which he’s now translated and selling in Japan — has become famous among the national role-playing community. “If a small portion of people come to see the joy of our games, and then go from using fakes to buying the real thing, then I think I can accept it,” Wang said.

Where script murder goes next is anyone’s guess. Critics have labeled murder mystery a craze that is destined to die itself within a year or two. Industry insiders, however, believe there’s still a lot of money to be made. Liu currently sells his box set products for 200 yuan to 500 yuan each, while Game Seer has reported writers selling scripts for as much as 5,000 yuan.

Wang Wenjia predicts the centers will continue thriving, if only because nothing better has come along yet. “There are too many bored people out there — they’ll always need to find some way to pass the time,” Wang said. “There’s nothing more fun out there, so why shouldn’t we play it?”