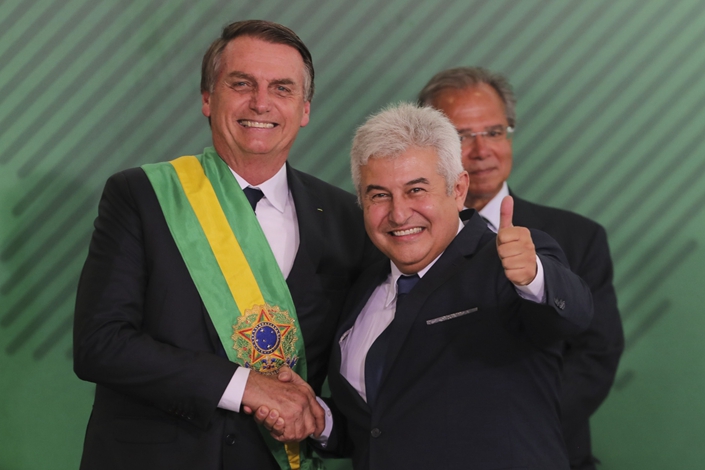 Brazilian President Jair Bolsonaro (left) shakes hands with the country’s Minister of Science and Technology Marcos Pontes during the swearing-in ceremony for his cabinet in Brazil’s capital on Jan. 1, 2019. Photo: Bloomberg

(Bloomberg) — Brazil will not accept any pressure from the U.S. over whether to allow the Chinese company Huawei to bid for its 5G network, said Marcos Pontes, the minister for science, technology, innovation and communications.

“A good partner always understands the needs of the other,” Pontes said in an interview in his office in Brasilia. “Just as Brazil makes no claim over what business the U.S. does with China and whether this affects or not our agribusiness.”

Pontes, responsible for establishing the criteria for the construction of the latest generation of ultra-fast internet, said that he would not veto any company from the bidding process and that the final decision would be based purely on merit. “With technical criteria, it’s hard to see how some of these big companies won’t have the capacity to participate,” he said.

Scheduled initially for March this year and then postponed until the second half of 2020, the 5G auction could be delayed until 2021, according to Pontes. That’s due to a technical problem as the new network would interfere with the transmission from the satellite dishes that currently relay TV signals in Brazil.

The government is currently studying two alternatives: putting filters on the satellite dishes, or changing the transmission frequency used by the country’s TV providers.

On top of this, the agency which regulates the telecommunications sector was slow to publish the official notice announcing the auction.

Pontes said he prefers to move forward cautiously anyway. The delay, in his opinion, benefits Brazil by allowing it to learn from the mistakes and successes of other countries acquiring their new 5G networks.

The proximity between the governments of Bolsonaro and U.S. President Donald Trump gives Brazil much to gain in the area of science and technology, according to Pontes. He is currently seeking U.S. cooperation in the fields of artificial intelligence, biotechnology, intelligent cities and the use of advanced materials.

But there are also ongoing discussions on similar issues with China. “Science and technology works as an excellent component of diplomacy,” he said.

The minister, who is Brazil’s first and only astronaut, said that investment in science and technology in the country is still very low. Such paltry state spending justifies a policy of tax breaks to technology companies, he argued, even if Economy Minister Paulo Guedes wants to limit sectorial subsidies as far as possible.