Opinion: How China’s State Sector Has Changed Since the Financial Crisis 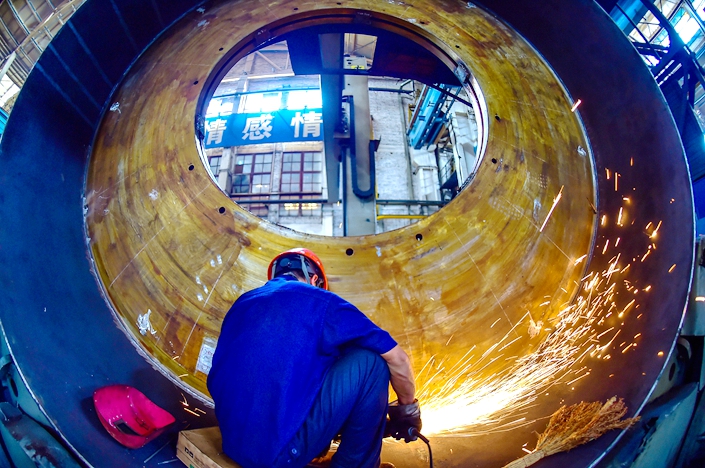 Nonfinancial SOEs total assets’ grew by 120 trillion yuan ($17.1 trillion) from 2007 to 2016, but most of the growth took place in sectors that could hardly be considered “strategic.”

Dr. Zhang Chunlin is an academic member of Caixin Insight and editorial board member of the Comparative Studies magazine. He is also a former lead private sector development specialist at the World Bank Group’s Trade and Competitiveness Global Practice.

In my research into China’s state-owned enterprises (SOEs), I found that the global financial crisis of 2008 and 2009 emerged as a crucial turning point in their behavior going back to the late 1990s, when the central government overhauled the state sector.

According to the official data about China’s SOEs published by the Ministry of Finance, the National Bureau of Statistics, and the State-owned Assets Supervision and Administration Commission, three trends changes took place around the time of the global financial crisis.

Third, there was a change in SOE profitability. 1998 was one of the worst years for SOE performance going back to the 1980s. That year, money-losing SOEs lost 93% of the earnings brought in by profitable SOEs, leaving the state sector with a total profit that amounted to only 0.3% of sales revenue and 0.4% of equity. However, SOEs managed a turnaround in the following decade. By 2007, total profit had reached 9% of sales revenue, and return on equity climbed to 12.1%. In the next decade, however, there was a U-turn in the trend.


Despite China’s exceptional economic growth from 2007 to 2017, SOEs’ contribution as a share of GDP declined. SOEs accounted for 23.1% to 27.5% of China’s GDP in 2017, compared with 29.1% in 2007, according to my estimates. This decline was mainly driven by greater private sector participation in the manufacturing industry. SOE dominance in 2017 was mainly in finance and infrastructure. The manufacturing industry as a whole is dominated by non-SOEs, although there remains a substantial SOE presence, and even dominance, in some parts of the industry. Moreover, the declining trend of SOEs’ share of industrial assets and output has since moderated.

While it is commonly thought that China’s government, with its state-led development model, seeks to identify “strategic industries” and offer them state capital support through SOEs, that isn’t borne out in the data I have studied.

Nonfinancial SOEs total assets’ grew by 120 trillion yuan ($17.1 trillion) from 2007 to 2016, but most of the growth took place in sectors that could hardly be considered “strategic.” A sector called “social services” — which is not clearly defined but likely a category for SOEs in business, consumer and other services — accounted for 20.5% of the 120 trillion yuan.

The sector with the next highest contribution, or 17.1% of the increase in total SOE assets, came from a sector opaquely defined as “administrations, organizations and others.” This category is, according to experts, a temporary parking space for SOEs that are not found in the portfolio of China’s state-owned asset supervisors nor directly overseen by the Ministry of Finance or government departments at the national and subnational levels. The next three biggest contributors are clearer. They are real estate (11.7%), construction (8%) and road transportation (6%). Together, the five sectors accounted for 63% of the growth of SOE assets from 2007 to 2016.

Industrial sectors that are often seen as “strategic” barely benefited from the growth in SOE assets. For example, only 2.8% of the 120 trillion yuan increase came from machinery, 2.1% from oil production and petrochemicals, 0.6% from electronics and 0.2% from pharmaceuticals.

Despite the unclear definitions of the top two sectors, it seems hard to imagine that the SOE growth that took place from 2007 to 2016 was under the control of a sole central authority following well-defined national strategic priorities. The real estate sector provides a clear example. SOEs managed to increase their share of total assets in the sector from 15% in 2007 to 25% in 2017, at which point the government explicitly restricted their involvement. The increase is most likely due to decentralized investments made by many players in the state sector, including the SOEs themselves — each for their own reasons.

The shrinking contributions of SOEs to China’s GDP and its manufacturing sector also defy the presumption that SOEs are simply government policy tools that lack managerial and financial independence.

Nonetheless, the data shows that they enjoy an abundant supply of capital, which suggests that they are not yet operating in an environment of “hard budget constraints” as intended. This is evident based on the fact that they collectively managed to accelerate growth of their assets at a time of declining returns on equity. How did they raise the needed capital to finance the observed asset growth when they neither supported national strategic priorities nor maximized return on equity?

As one might predict, the capital was largely financed by debt. From 2007 to 2017, the total liabilities of nonfinancial SOEs nearly quintupled, growing far faster than assets. However, there was also fairly strong growth of their equity capital base — 3.2 times. As a result, the average debt-to-equity ratio of a nonfinancial SOE stayed in the range of 1.5 to 2 — about the same as the average ratio prior to the global financial crisis. Sectorial and firm-level variations notwithstanding, the overall expansion of SOE assets was not predominantly debt-financed.

So, what were the sources of SOE’s equity capital growth? The available data doesn’t paint a complete picture, but a few facts are clear. First, the private sector contributed. From 2007 to 2017, owners’ equity in nonfinancial SOEs grew by 50.6 trillion yuan, of which 39.4 trillion yuan was state owners’ equity. The rest was contributed by nonstate investors who acquired noncontrolling interests in SOEs. This is not surprising when one realizes that a large proportion of China’s “SOEs” reported in official statistics are not 100% state-owned. Rather, they are “state-controlled enterprises” that have nonstate shareholders. State-controlled enterprises accounted for 54% of nonfinancial SOEs’ owner equity in 2011. The share must have grown since then, though there is no data to confirm this.

Second, a major source of funding for state equity capital is the profit of SOEs themselves, which is mostly retained in the SOE sector. From 2007 to 2017, total profit of nonfinancial SOEs amounted to 25.1 trillion yuan. The government started collecting dividends from SOEs on a pilot basis from 2007 to 2008, during which it took in a paltry 58 billion yuan. From 2012 to 2017, years for which data are available, the government at both national and subnational levels collected 1.1 trillion yuan from nonfinancial SOEs. There should be more than 23 trillion yuan of SOE profit that was retained by SOEs and added to state equity.

Third, explicit capital injection from the budget is not significant. China has four government budgets, only one of which, the state capital management budget, has an explicit expenditure line for equity injections into SOEs. From 2016 to 2018, for which nationwide data are available, these injections amounted to less than 100 billion yuan each year, compared with equity capital increases of 3.8 trillion yuan in 2016 and 9 trillion yuan in 2017. Of course, to the extent that SOE profits attributable to the state owner are “government revenue,” they should be incorporated into the government budget as required by China’s Budget Law. But this is not the current practice.

Finally, equity capital growth can be debt-financed. This can happen, for example, when a parent company borrows to finance its investment in the equity of its subsidiaries. In fact, SOEs invest in each other extensively in many ways, creating a double counting problem when their balance sheets are simply summed up. Official statistics are based on balance sheet data that are consolidated at the level of “SOE groups,” or the parent companies that are immediately below state-owned asset supervisors. However, double counting cannot be completely eliminated until one consolidated balance sheet is produced for the entire state sector.

Despite the limitations from data constraints, the need for China to continue hardening the budget constraints of SOEs in access to capital is clear. One potential measure is to incorporate all SOE profits attributable to the state owner into the government budget, as required by law. It is also clear that most existing state capital invested in SOEs is unlikely to be absorbed by “strategic sectors,” however they are defined. The reform of the state capital management system must start by distinguishing “policy-oriented” vs. “return-oriented” deployment of state capital to allow differentiated management methods before any further reform.