U.S. Drops China as Currency Manipulator Ahead of Trade Deal 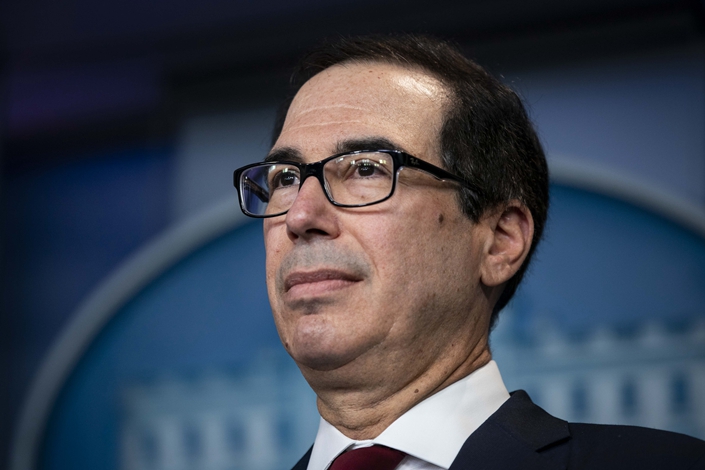 Steven Mnuchin, U.S. Treasury secretary, listens during a briefing with Mike Pompeo, U.S. secretary of state, not pictured, at the White House in Washington D.C., on Jan. 10, 2020. Photo: Bloomberg

(Bloomberg) — The Trump administration on Monday lifted its designation of China as a currency cheat, saying the nation has made “enforceable commitments” not to devalue the yuan and has agreed to publish exchange-rate information.

The change in the U.S. stance was outlined in the U.S. Treasury Department’s semiannual foreign-exchange report to Congress. The document was released two days before America and China are set to sign a phase-one trade agreement in the East Room of the White House at 11:30 a.m. in Washington, according to people familiar with the plans.

The document listed no major U.S. trading partner as a currency manipulator among the 20 economies it monitors for potential manipulation. Switzerland was added to the monitoring list, while China, Japan, Korea, Germany, Italy, Ireland, Singapore, Malaysia, Vietnam remained.

“China has made enforceable commitments to refrain from competitive devaluation, while promoting transparency and accountability,” Treasury Secretary Steven Mnuchin said in a statement released Monday in Washington.

The Asian nation’s commitment was made as part of the first phase of a U.S.-China trade deal, according to the 45-page report. The U.S. and China have been negotiating since the Aug. 5 designation on China, which came in response to what the Treasury said was Beijing’s “concrete steps to devalue its currency.”

Bloomberg News reported earlier Monday that the Treasury would lift the designation on China, news that sent the yuan to a six-month high.

The designation in August further escalated the trade war with Beijing after the country’s central bank allowed the yuan to fall in retaliation to new U.S. tariffs.

The report urges China to “increase public understanding” between the People’s Bank of China and the “foreign-exchange activities of the state-owned banks, including in the offshore RMB market.” Treasury said the PBOC “appears to have largely refrained” from intervention in 2019.

The report was officially due in mid-October but was delayed as the U.S. and China negotiated over trade.

Designation as a currency manipulator comes with no immediate penalties but can rattle financial markets. Currency policy has emerged as Trump’s latest tool to rewrite global trade rules that he says have hurt American businesses and consumers. He has made foreign-exchange policy a key piece of trade deals with Mexico, Canada, South Korea and China.

Treasury has also expanded the number of countries whose currency and economic policies are scrutinized to 20 from 12.

Countries with a current-account surplus with the U.S. equivalent to 2% of gross domestic product are now eligible for the list. Other thresholds include persistent intervention in markets for a nation’s currency, and a trade surplus of at least $20 billion. Countries that meet two of the three criteria are placed on a monitoring list.

The Treasury Department also said that Switzerland was returned to the monitoring list, as its foreign-exchange purchases have “increased markedly,” and the U.S. encouraged officials to publish intervention data more frequently; Ireland may be removed from the monitoring list in the next report, expected in April; Thailand and Taiwan are not officially on the monitoring list but are close to breaching key thresholds; and Vietnam intervenes “frequently” but has “credibly conveyed” to the Treasury that its foreign-exchange purchases are required for re-building reserves.