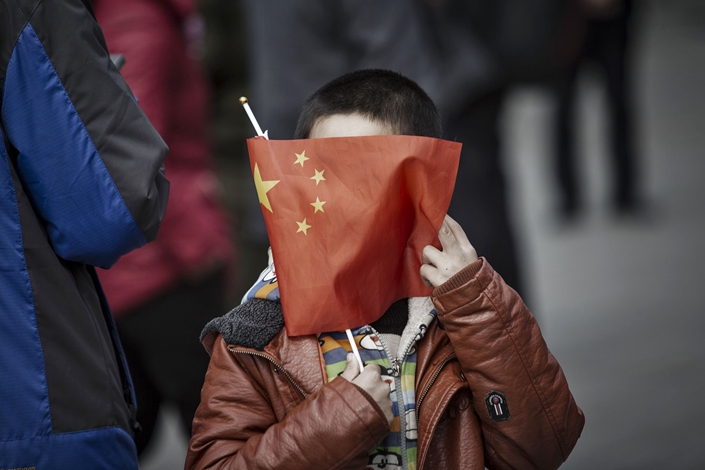 A boy wraps his face with a Chinese national flag while standing on Tiananmen Square in March 2017. Photo: Bloomberg

(Bloomberg) — China’s birthrate dropped to the lowest level since at least 1949 last year and the labor force continued to shrink, in the latest sign of slowing growth prospects for the world’s second-largest economy.

The number of births per 1,000 people declined to 10.48, the lowest level on record according to National Bureau of Statistics data going back to when the Communist Party took power. China’s working-age population — those aged 16 to 59 — declined by 890,000, the figures released Friday showed. The number of newborns in 2019 fell to 14.65 million, a decrease of 580,000 from the year before.

China has struggled to arrest the country’s declining birthrate for years, easing its stringent one-child policy in 2013 and allowing each family to have two children in 2016. Still, top leaders have resisted calls to fully lift restrictions on the number of babies each family can have even as the birthrate in 2018 has dropped to lows unseen since the turmoil of Mao Zedong’s Great Leap Forward.

“The historically low number of births in part reflects declining birth numbers since the 1990s, but also reveals something much more profound about the social transformations that are still unfolding in China, and can be worrisome,” said Wang Feng, a sociology professor at the University of California at Irvine.

Domestic migration on a massive scale, rapid urbanization, a cutthroat work culture, the high cost of housing and education and rampant gender discrimination all contribute to the low birthrate and may continue to do so for decades to come, Wang said.

In central Henan province, a member of the provincial political consultancy body called for the immediate abolishment of so-called family planning regulation to encourage births in an interview with local media on Sunday. Hu Peng, a researcher with the state-run Chinese Academy of Social Sciences, suggested integrating policies that would boost birthrates into projects.

Even if the government lifted all restrictions on childbirth, “that would only have a small impact on reversing the fertility trend, as the willingness to have three or more children is very low,“ said He Yafu, a Guangdong-based demographer.

The 2019 figure marks the third consecutive annual birth rate decline since the Chinese government enacted its looser “two-child” policy in 2016, and is 3 million fewer births than were recorded in its inaugural year.

Though China once expected that birth policy reform it could see up to 20 million births in a peak year, that tally hasn’t become a reality, and such a wide margin of miscalculation has drawn criticism at home, fueling the public’s skepticism toward the birth policy.

“With the reduction of the population of fertile women and the weakening effect of the two-child policy, the births will continue to drop,” said He, the demographer.

China’s population is aging more quickly than most of the world’s developed economies, a hangover from decades of family planning policies. In 2001, those aged 65 and older accounted for more than 7% of the country and the proportion has grown at a quicker pace each year ever since.

China’s elderly population is expected to grow by a total of 224 million between 2010 and 2040, with an average annual growth rate of 3.62% and net increase of 7.46 million, the Chinese Academy of Social Sciences estimates. Researchers also forecast China’s total population to begin to decline around 2028.

Chinese authorities have deliberated over raising the country’s retirement age, currently 60 for men and 55 for women, to cope with the shortage in the labor force and shortfall in the national pension fund, though no action has been taken yet.