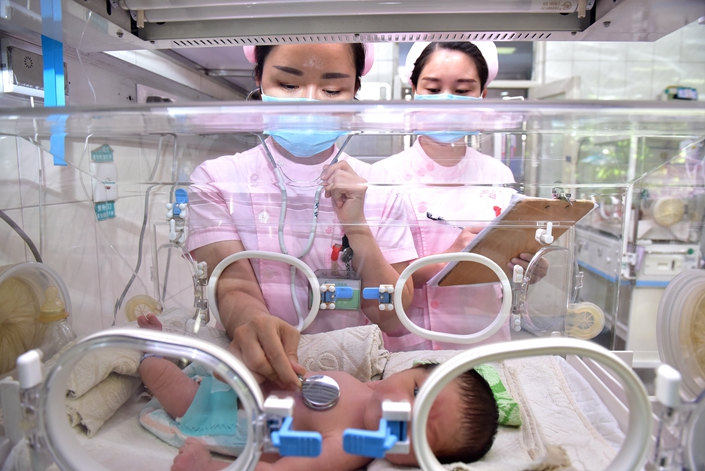 China’s next census will be conducted in 2020. This time the Seventh National Population Census of the People's Republic of China must get it right. The shadow of a grievous flaw from the last Chinese census hangs over this year’s census. The infant mortality rate (IMR), the rate of infants dying under the age of one, from data in the 2010 Census was highly erroneous. The faulty data obscured one of the gravest offenses to gender equality in the 21st century. Since 2000, there has been no reasonably reliable census for analyzing IMR. The data in that year indicated widespread infanticide.

Infanticide is a striking word because it is beyond belief to consider this an ongoing social issue in contemporary China or anywhere in the modern world. But whether widespread infanticide exists today in China isn’t a question that can be answered with the previous census. The data from 2010 showed a huge reduction in IMR from 2000 but public health researchers have deemed the data inaccurate and unusable.

Without reliable data, persistent media coverage and a concerned public, even an issue as terrible as mass deaths of baby girls at the hands of parents is out of sight, not addressed in policy, and no targets are set to end the tragedy.

Sex imbalance at birth in China due to widespread sex selective abortion, the primary cause of the “missing girl” phenomenon, is a related issue and well known internationally. In 2017, the sex ratio at birth (SRB) was 112 boys born for every 100 girls. The typical ratio worldwide is around 105 boys for every 100 girls. SRB has fallen gradually from 2009 onwards, having reached a high of 121 boys to 100 girls in 2004. Sex selective abortion by parents is still widely practiced by families in rural areas and towns. Their motive is explained by economic insecurity and the cultural tendencies of a deeply entrenched history of favoring boys. The higher odds of baby girls dying point to parents killing or mistreating their girls (e.g. low urgency in taking a sick daughter to the hospital). These actions are motivated by the same socioeconomic reasons explaining sex selective abortion.

The 2000 Census showed prolific infanticide. Nationally, 29 baby girls out of every 1000 died compared to 21 baby boys out of every 1000. The provincial breakdown is even more astonishing. In Jiangxi the province with the greatest disparity, 78 baby girls out of every 1,000 died in Jiangxi in 2000 compared to 31 baby boys out of every 1,000. Since globally IMR is typically higher for infant boys it can be inferred from the 2000 Census at least 5% of infant girls in Jiangxi died due to infanticide. Despite the magnitude of the disparity, Dr. Judith Banister, a Chinese demographics expert, estimates that official data in 2000 and earlier years may especially underestimate IMR for girls. In her research article “Shortage of Girls in China Today” published in the Journal of Population Research, Banister concludes “by 1999–2000, girls were permanently lost primarily through sex-selective abortion of female foetuses and secondarily through excess female infant deaths, due to infanticide, abandonment, ill-treatment, or neglect of infant girls.”

IMR is extremely misreported from data in the 2010 census. There is a large drop in female IMR from the 2000 Census. However, academics question the quality of the data. A research project analyzing the 2010 Census, prepared for the National Bureau of Statistics and UN agencies, on a broad range of issues related to child health by professors Chen Wei and Duan Chengrong of Renmin University and researcher Wang Guangzhou of the Chinese Academy of Social Sciences flagged IMR as inaccurate. The relevant data was “adjusted for underreporting.” Another publication by professors Huang Rongqing and Zeng Xianxin of the Capital University of Economics and Business assailed the credibility of IMR figures specifically, estimating the 2010 Census led to underreporting of IMR by about 78%. According to Huang and Zeng after making adjustments to the 2010 Census data, overall the IMR gender disparity declined from 2000. But in most provinces baby girls still suffered significantly higher odds of death than boys. For instance in Jiangxi, still among the worst provinces in terms of disparity, the IMR rate per 1,000 is estimated to be 26 and 20 for girls and boys respectively.

The analysis done for the NBS and UN agencies portrays the IMR gender disparity as falling dramatically in 2010. The research project estimates the decline to be over 90%, “indicating that survival conditions for female infants have improved significantly over the past ten years in China.” Such an optimistic conclusion is hard to reconcile for a time period as short in multi-generational terms as 10 years. Sex preference has ancient roots and fades gradually even in a fast-changing society. There were 118 boys born for every 100 girls in 2010, a rate higher than in 2000. The persistence of a skewed SRB confirms the entrenched power of this remnant of backwards thinking. It also must be noted that despite reaching an optimistic conclusion, the research project started with no confidence in the quality of the IMR data, putting a question mark on assertions of tremendous progress.

Without quality data we don’t know the current situation for baby girls. Getting the 2020 Census right is the first step to clarity. If the unvarnished reality shows high levels of infanticide continue in sections of Chinese society, then propelling society forward needs more than better data. Media coverage is critical in any political system for an issue to gain traction in the policy terrain. Both domestic and international media have avoided reporting on infanticide. Like any other society, Chinese people want to avoid thinking too much about one’s shortcomings.

While Western media scrutiny of official Chinese policy is zealous and sometimes exhibits bias unfavorable to China, in this case for well-intentioned reasons there is a reluctance to raise questions about the actions of millions of villagers. There is a fear of invoking historical racial tropes dating back from the 19th century. Christian missionaries witnessing the abandonment of baby girls in old China condemned Chinese as heathen. The Western media looks away because it is extremely uncomfortable with even giving a flickering moment of credibility to ideas that spur prejudice about any group of people. However, Chinese people should not be shielded from self-awareness of faults due to doctrinaire antiracism.

Even worse, the Western media has given excessive space to incomplete counter narratives to explain away the phenomenon of missing girls. “Lost and Found: The ‘Missing Girls’ in Rural China” by professors John James Kennedy and Yaojiang Shi was published in 2019 after their research paper on the subject generated fanfare in the news media. In their book, the professors estimate half of missing girls are not actually missing but were unregistered at birth by parents in statistically lenient villages wishing another chance for a son under the one child policy. Other scholarly works attribute a much smaller fraction of missing girls to late registration. In either case, abnormalities in both SRB and the IMR disparity would still be very pronounced. Dispensing with qualifications, some Western media outlets ran headlines about the paper as offering a complete alternative explanation for missing girls (“It’s a myth that China has 30 million ‘missing girls’ because of the one-child policy, a new study says”). As outsiders, Westerners have a critical role to play in highlighting problems Chinese people do not want to face. They should not aid and abet Chinese people in evading responsibility.

In the 21st century, China has excelled in tackling poverty, improving public health, and lowering infant mortality in general. If infanticide remains prevalent, China can rise to the occasion and take responsibility to protect its baby girls. The initiative begins with reliable census data.

The author is a corporate lawyer in Beijing.