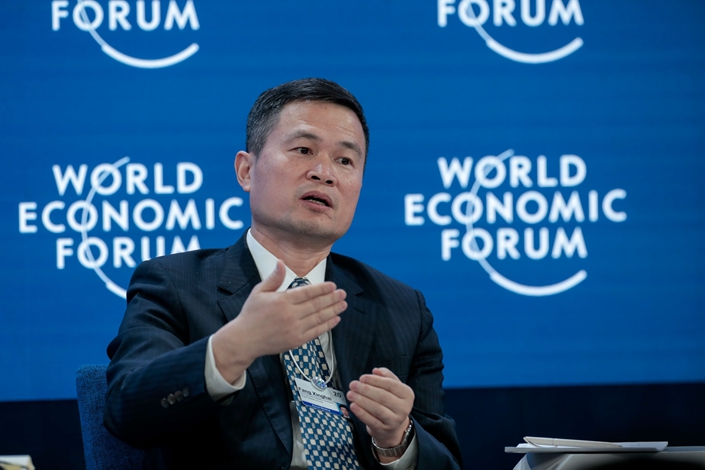 Fang Xinghai, vice chairman of the China Securities Regulatory Commission, speaks during a panel session on the opening day of the World Economic Forum in Davos, Switzerland, on Tuesday. Photo: Bloomberg

(Bloomberg) — China’s securities regulator is looking at the potential to raise the cap on foreign ownership in the nation’s listed companies, according to a senior official.

In an interview in Davos, Switzerland, Fang Xinghai, vice chairman of the China Securities Regulatory Commission, said there’s potential to lift the limit to “more than 30%” given that other countries in the region have higher caps.

“So why shouldn’t China do similar things,” he said in a Bloomberg Television interview while attending the World Economic Forum. “Now of course, this has to go through a quite long process in our decision making system, but I think in principle that it’s possible.”

China currently halts buy orders from foreign firms when their holdings in domestic stocks reach 28%. Global index compiler MSCI Inc. last year urged the regulator to consider easing the restrictions after two listed companies were removed from its widely followed benchmarks. Buying can resume only when the figure falls to 26%.

Fang said the time-frame would depend on the number of companies hitting the limit, adding that Chinese policymakers are “very responsive to needs of international investors.”

Thailand’s stock exchange caps foreign ownership on most shares at around 49%, or 25% for banks. Brazil limits overseas holdings of banks, media and transportation companies only. In Europe and the U.S., such limits are applied to airline shares.

Weighed down by an economic slowdown and surging levels of bad debt, China is moving with greater urgency in opening up its $45 trillion financial markets this year to global financial firms. Policymakers in Beijing in July decided to bring forward the opening by one year and then as part of the trade deal announced last week also sped up the access of U.S. investment banks by eight months to April.

For the Asian nation, opening would mean an influx of capital and a chance for local firms to compete with, and learn from, global giants. JPMorgan Chase & Co., Goldman Sachs Group Inc., UBS Group AG and others are looking adding at least 1,000 new bankers, traders and analysts and beefing up office space to expand their footprint in everything from futures and brokerages to asset management. As much as $9 billion in annual profits is up for grabs in the coming years in the commercial banking and securities sectors alone.

Fang said there will be “no problem” for China to meet the April 1 timeline.

The top regulator expects the stock market to be stable in 2020, but uncertainties such as the recent virus breakout remain.

Tensions with the U.S. also pose a danger to the global industry’s ambitions in the midst of the trade war. The U.S. is said to be looking at measures to limit the capital flowing into China, and even forcing the removal of Chinese companies listed in New York. An American crackdown on capital flows would expose a new pressure point in the economic dispute between the countries, and cause disruption well beyond tariffs on hundreds of billions of dollars worth of products the two sides have levied against each other.

Fang said China has submitted a proposal to U.S. regulators to address the longstanding issue of opening the audit books of Chinese companies listed in America. The issue escalated last year when U.S. lawmakers introduced a bill proposing the delisting of Chinese firms that don’t open their books to American regulators.

The proposal was submitted several months ago and that the U.S. is “actively looking at the proposal,” he said.

He rebutted U.S. Senator Marco Rubio, who in an op-ed in the New York Times warned that investing in China will undermine the U.S.

He’s “mistaken” in believing China does damage to the interests of the world, he said. “China is a peace loving country.”