Opinion: We Must Adopt a Wartime Footing to Defeat the New Coronavirus 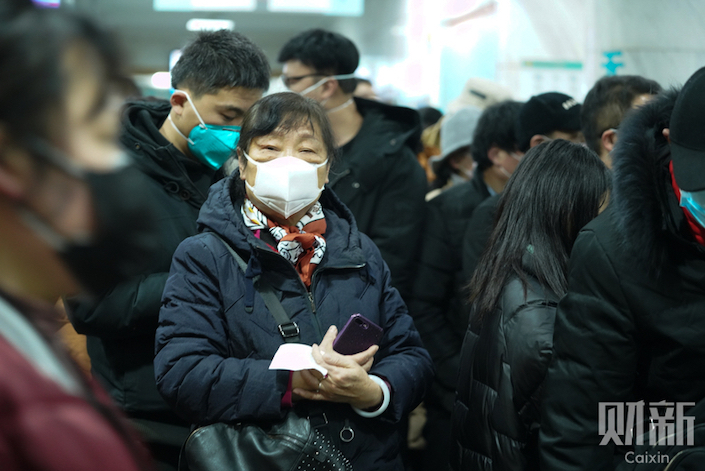 The outbreak of the new coronavirus that originated in Wuhan has shaken the whole country and has raised concerns around the world.

On Jan. 23, this well-connected city with a population of 11 million people was for all intents and purposes locked down, signaling that we have effectively entered a state of war.

Most Chinese people have lived their entire adult lives in peacetime and don't have the experience of being on a wartime footing. They might find it hard to accept the new reality with a peacetime mindset.

For our compatriots who suffered sudden disasters such as SARS and the Wenchuan earthquake, the experience of being on a wartime footing is valuable. Now we need to tap into this collective memory and face the War of Wuhan with all our fellow Chinese.

The biggest enemy in this new coronavirus war is the deadly pneumonia the virus induces. A public enemy of all human beings, the spread of the epidemic respects no domestic or international borders. No one can stay out of this War of Wuhan. To defend Wuhan is to defend ourselves and ultimately all human beings.

Starting with Guangdong and Hunan Jan. 23, 30 Chinese provinces have now officially declared the highest emergency response level to the epidemic. On Jan. 25, President Xi Jinping also told meeting of the Politburo Standing Committee that Communist Party committees and governments at all levels must make the prevention and control of the virus their top priority.

The challenges to preventing the spread of the epidemic are considerable and severe. To those who have long attached emotional and psychological importance to the Lunar New Year Festival, it requires rational thinking and a clear mind to face the epidemic. Declaring the highest emergency level is already a comprehensive mobilization of society to maintain stability and actively rise to the challenge of the epidemic.

The ultimate weapon to defeat the epidemic is science. First of all, it is about the effort that scientific researchers and medical workers are making, fully utilizing every minute of their day to crack the mysteries of the new coronavirus and to develop vaccines, medicines and clinical applications. Furthermore, it is also about every citizen needing to fight the epidemic in a scientific way.

In the words of the Chinese leader Chiangmai Kai-shell in his 1937 call for unity in the fight against Japan: “Every part of this land, south or north, shall be the battlefield, and every single man in this country, young or old, must do his duty to defend our country.”

At this moment, no one deserves more sympathy and concern than the people in Wuhan. Whether you are local residents or foreigners, whether you are my acquaintances or strangers, as long as you are in Wuhan now, at this very moment, you are a Wuhanese, a member of China’s family, all 1.4 billion of us.

Since it is hard to predict how long this epidemic will last, we sincerely hope that you can stay calm. Try your best to protect and equip yourself rationally and carefully with all the virtues needed to be a good modern citizen for today and tomorrow. Prepare yourself well for the ultimate victory in the War of Wuhan.

At this moment, everyone expects the main forces to be brave and skillful on the battlefield. The greater power governments at all levels have, the greater responsibility they will also have to shoulder.

The public expects governments to function effectively and efficiently and to provide basic social public services to those in Wuhan. The policemen, firefighters and rescue teams are expected to keep social order and public safety. The medical workers are expected to provide health care for every patient and save every single life. The scientific researchers are expected to develop vaccines and test them in clinical trials as soon as possible. The journalists are expected to provide first-hand information to enable better decision-making, and communication. All who directly joins this War of Wuhan is expected to perform their duties and try their best. Of course, every one of you is a national hero, and should keep yourself safe. Your safety is the wish of all our fellow citizens.

At this moment, everyone desires capable officials to supervise the operations. A stable social order directly determines the efficiency and duration of the War of Wuhan, and the fate of every national hero. How to meet the basic necessities of people in Wuhan? Are government officials at all levels dutifully responsible? Is there any corruption or collusion between government and businesspeople? Is there any government inaction, disorderly action, or slow action? Is there any underreporting, late reporting or misinformation on disease-related information? Based on historical lessons from SARS and the Wenchuan Earthquake, these public concerns are reasonable.

Therefore, under the current circumstances, we appeal to the Central Commission for Discipline Inspection at all levels, which has made great achievements since the 18th Communist Party of China National Congress, to join the War of Wuhan and act as operation supervisors, which will lay the foundation for assessing this epidemic and for the final victory.

At this moment, nothing is more urgent than timely and comprehensive, objective, accurate and authoritative information from the government. Government information is most urgent during wartime. The earlier it is released, the more lives will be saved. Behind every Wuhanese, it is their family, relatives, colleagues and friends who have the highest need for information.

Therefore, we advise Wuhan on the city level and Hubei on the provincial level ― and even authorities at higher levels ― to release government information more easily and quickly by cutting red tape. They should apply big data technology to make the best effort possible to meet the public’s right to know, to ease their anxieties and feelings, and to maintain social stability.

Unusual measures are taken during unusual times. The public should be aware that wartime is not peacetime. During peacetime, every citizen should expect certain rights. But during wartime, while those rights need to be respected, citizens should also consider giving up some of their rights to enjoy more freedom in peacetime later.

Specifically, for our compatriots in epidemic areas, please follow the necessary rules and measures from government officials, policemen, firefighters, rescuers and medical workers. As long as you are keeping yourselves safe and healthy, try to trouble them as little as possible so that more resources can go to those in greater need.

For our compatriots outside the epidemic areas, while protecting yourselves and doing your own jobs, try to provide all the possible help you can. It will be the greatest support for your compatriots on the front line and the greatest contribution for this War of Wuhan.