Virus Dread Spreads With Germany on Alert After Munich Cases 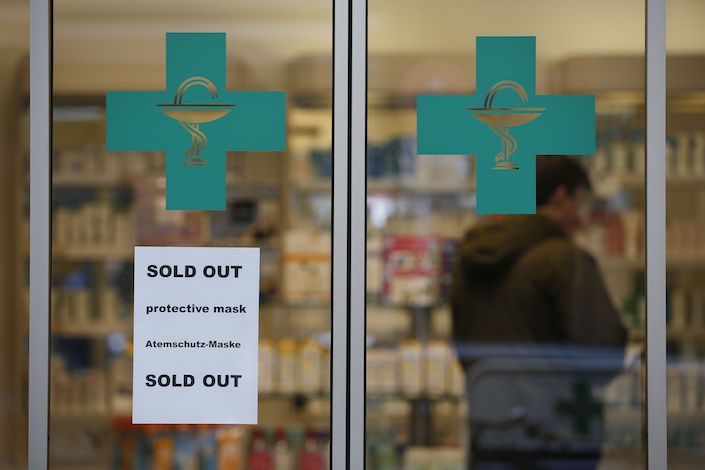 (Bloomberg) — Near the famous Hofbraeuhaus beer hall in downtown Munich, a printout taped to the glass door of a pharmacy conveys the anxiety gripping the city at the center of one of the biggest coronavirus outbreaks outside China.

In plain lettering, the sign declares: “SOLD OUT protective mask.” It’s a contrast to the sober public-service posters at Munich airport, where authorities inform travelers in tiny German, English and Chinese lettering how to recognize symptoms and what to do.

Germany has taken center stage in the global spread of the coronavirus, a byproduct of the country’s vigorous trade with China. New details about the disease — like the fact that people are now getting sick who haven’t been in China and catching the virus from someone who didn’t show symptoms at the time of contact — are fueling public concerns.

Ground zero for the German outbreak is the Munich suburb of Stockdorf, where auto-parts supplier Webasto AG shut its headquarters after several staff members became infected. That’s caused fallout on local businesses and created a run on medical masks in Munich, where the face coverings are a rarity on its clean and orderly streets. At least three pharmacies in the city center said they were sold out as of Wednesday morning.

“We had about 50 people come in and ask yesterday,” pharmacist Nicole Witt said between serving customers at Rumford Apotheke near the city’s open-air Viktualien food market. Her shop has ordered more face masks, but they won’t arrive before next week.

German officials are trying to ease anxiety. Health Minister Jens Spahn told reporters in Berlin on Wednesday: “I would urge people to be calm but vigilant.”

The government was set to evacuate about 100 Germans from Wuhan on Friday using a military plane. Upon arrival in Frankfurt, they were to be kept under quarantine for two weeks, officials said at a regular government press briefing on Wednesday.

Bavaria’s Health Minister Melanie Huml said Wednesday that number of confirmed cases was steady at four. The state’s infectious disease task force said Tuesday after the first German case was confirmed that the risk to the public was probably low. He said people should nevertheless take usual precautions including washing their hands after riding on a bus or subway.

“Now that I know, first thing I’ll do when I arrive at work is wash my hands,” Alexander Wegmann said Wednesday morning while leaving the subway at Munich’s central square, Marienplatz, beneath the city hall. “You do kind of look around and worry about who might be infected.”

The German scare started on Monday. A 33-year-old man who’d been feeling sick over the weekend showed up for work at Webasto, which makes vehicle heating and cooling systems and has a facility in Wuhan. His bosses told him to go to the doctor, and by evening, he was confirmed as the first German to contract the disease.

The way in which the man had caught the virus raised alarm in Germany. A Chinese colleague last week visited the company’s headquarters in Stockdorf, a small town of about 4,000 people a half hour south of Munich. She had stayed for four days, then returned to China and started feeling sick on the flight back, officials said.

Later Tuesday, it emerged that three more employees from the Stockdorf office had also been confirmed sick with the coronavirus, while still more were undergoing testing. Authorities are testing more than 40 other employees who may be at risk.

Webasto canceled all business trips to and from China for at least the next two weeks and closed its headquarters until next week. The shutdown has hit local businesses hard.

“We depend on Webasto,” said Halit Doenmez, who runs a deli with her husband where she offers warm lunch mainly for the company’s staff. “It’s completely dead,” the 55-year-old said, adding that she considered staying closed on Wednesday, but opened because she didn’t want to lose local shoppers who come for vegetables.

The square where she runs her store is home to several restaurants that depend on lunch guests from Webasto. At Restaurant Singh across the street, only two tables were taken at noon on Wednesday, which is normally a peak time with more than 30 guests for the eatery, which offers Italian cuisine along with German Schnitzel and the occasional Indian food.

The virus is “a big deal,” said Doenmez. “Everyone’s talking about it, everyone.”

The confirmed patients are all being treated in an isolation ward at a hospital in Munich’s Schwabing neighborhood, a residential district in the city’s north. All are in good condition with no fever or respiratory issues, according to Bavarian health officials.

Webasto Chief Executive Officer Holger Engelmann said that while the spread appears under control at the company, “it’s too early to give an all-clear.”

The outbreak is having ripple effects across Germany. Deutsche Lufthansa AG halted flights to mainland China until Feb. 9 and has seen business travel to the Asian country take a hit due to fears about the virus.

Industrial conglomerate Thyssenkrupp AG, which generated over 3 billion euros ($3.3 billion) in sales in China in 2018 and employed over 17,000 people there, has advised against business travel to the country.

Advanced manufacturing firm Manz AG, a producer of components for the energy and electronics industry, canceled all near-term business trips to China, adding it was closely monitoring developments. Ten staff members who were working at various locations in China returned to Germany.

Back in Munich, Luana Deichmann was waiting for a friend to arrive from Brazil, wearing a face mask and holding a sign that said “Welcome to Bavaria” in Portuguese. Deichmann, who lives close to the area where the four cases were discovered, said she was wearing the mask merely as a precautionary measure and not out of fear.

“I always think I’m healthy, but I work with tourists, so it’s good to take care of yourself,” she said, adding that she advised her traveling friend to wear a mask on the plane and carry hand sanitizer to minimize risks. “It’s not so dramatic that I would tell him not to come to Munich.”