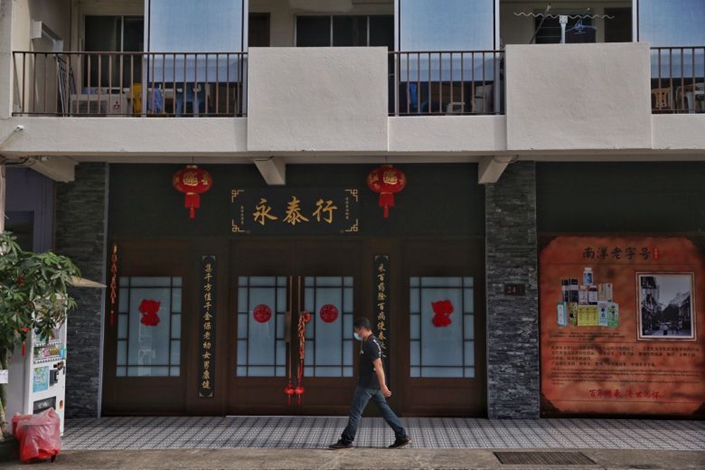 Two women who work at Yong Thai Hang, a Chinese health products shop in Singapore that caters to Chinese tour groups, have come down with the coronavirus, as has a tour guide who led Chinese tourists there. Photo: The Straits Times

(The Straits Times) — Singapore has recorded its first cases of local coronavirus transmission, with four women here infected who had not travelled to Wuhan, the epicenter of the outbreak.

The third is a maid of one of the women, while the fourth is a tour guide who had taken groups to the same shop.

The tour group in question has since returned to China.

In addition, another two confirmed cases were announced on Tuesday.

The two were among a group of 92 people flown back to Singapore from Wuhan on a Scoot flight on Thursday. Before this, another two on the same flight had been reported as confirmed cases.

In total, there are now 24 confirmed cases in Singapore.

“There is, however, no evidence of widespread community transmission,” said Health Minister Gan Kim Yong at a press conference.

“It is possible that there could be broader community spread despite our best efforts,” he told reporters.

Should that happen, Singapore will consider additional measures to reduce human-to-human interactions — such as cancelling mass gatherings, suspending schools and paring down nonessential care services — to slow the spread of disease.

The country has been preparing for such clusters, and measures implemented so far have been directed toward preventing and containing the risk of spread beyond such local clusters to the broader community, the MOH said.

As surveillance has been stepped up, more such local clusters are expected, including more cases of local transmission, it added.

The ministry has also started contact tracing to ring-fence the cluster and limit further spread.

Cases with limited community transmission are not unexpected, said Gan, who co-chairs a multi-ministry task force to defend the country against the virus.

“This is a scenario which we are prepared for,” he said, noting that efforts will help reduce the risk of escalation. “As the situation evolves, we will step up our posture accordingly to further contain the situation in Singapore.”

With local transmission happening here, the government is stepping up cleaning of public areas, as well as measures to lower the risk for vulnerable groups such as young children and the elderly.

As an added precaution, the authorities said they are also contacting people with similar profiles to the four cases of local transmission, who have had recent close contact with individuals with travel history to China.

In addition, all patients with pneumonia at public hospitals have been tested for the 2019-nCoV, as the virus is called, since last week.

Current evidence suggests that the virus can be spread by droplets from infected individuals, and the best way to prevent this is through personal hygiene and social responsibility. Businesses and organizations are also advised to clean their premises more often, especially high-traffic areas.

The earlier 18 confirmed cases of the virus here were all imported, comprising 16 Chinese nationals and two Singaporeans who had all traveled recently to Wuhan, the capital of Central China's Hubei province.

One has been discharged, said the ministry on Tuesday.

The update was given after a two-day lull on Sunday and Monday, when no new cases were reported.

The coronavirus outbreak shows no signs of abating, and while Singapore has put in place multiple lines of defense to check cases coming in from abroad or being passed within the community, it must prepare for a long fight against the virus, Gan had told Parliament on Monday.

The coronavirus was first reported in Wuhan late last year. As of Monday, it had infected more than 20,000 people and claimed over 420 lives, mainly in China.

Outside mainland China, there have been close to 300 cases and two deaths, one each in Hong Kong and the Philippines.

On Tuesday, Malaysian health authorities also confirmed the first citizen to be infected with the coronavirus, bringing the total number of confirmed cases in the country to 10. They said the 41-year-old Malaysian had travelled to Singapore for a meeting last month with colleagues from China — including one from Wuhan. But he showed symptoms only on Wednesday, nearly a week after he returned to Malaysia.

Chinese data suggests that the coronavirus, while much more contagious than SARS, is significantly less lethal, although such numbers can evolve rapidly. It very likely passed from certain wild animals to humans at Wuhan's South China Seafood Market and then evolved into human-to-human transmission.

Singaporeans are advised to defer all travel to Hubei and all nonessential travel to China, while visitors with recent travel to China or those with Chinese passports will not be allowed entry here.