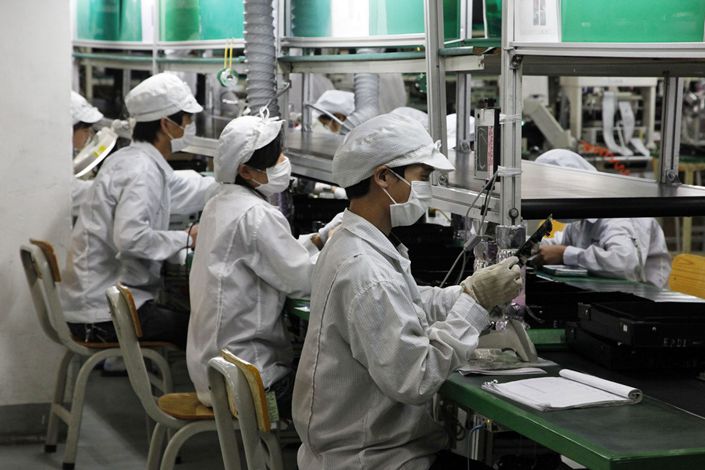 Foxconn employees operate on the assembly line at a Hon Hai factory in Longhua, Shenzhen, on May 26, 2010. Photo: Bloomberg

Hon Hai, which makes the vast majority of the world’s iPhones from the central Chinese city of Zhengzhou, is now projecting a sales increase of 1% to 3% this year, Chairman Young Liu told Bloomberg News in a text message. That’s down from a Jan. 22 forecast of 3% to 5%, before the epidemic spread around the globe, and lags the 5.4% average of analysts’ projections.

The contagion is expected to disrupt Apple’s carefully calibrated production chain centered on China, while also dampening consumer demand and overall economic growth. Hon Hai, an important manufacturer also for major brands from HP Inc. to Sony Corp., said Tuesday it still expects to be able to restart facilities throughout China on schedule, according to a text message sent to Bloomberg News. Suppliers such as Quanta Computer Inc., Inventec Corp. and LG Display Co. also said they would go back to work next week in China.

But while Chinese officials and companies have targeted Feb. 10 as the date to resume work in much of the country, doubts about the timing have grown in recent days as the virus death toll rises, workers find themselves stuck in municipal lockdowns and the transport of people and goods has been hampered.

“Given current market conditions, we are lowering to 1% to 3%,” Liu replied when asked about whether Hon Hai will cut its original sales growth forecast for this year.

Hon Hai’s shares stood largely unchanged Wednesday after having slid about 11% since a broader Asian market selloff began in mid-January.

Apple in January issued a wider-than-usual sales forecast to reflect what CEO Tim Cook called “uncertainty” caused by a virus outbreak in one of its most important markets.

Research firms vary in their estimates of how big the shipments drop-off will be, reflecting the still-developing nature of the virus outbreak -- but they agree it will hurt. Strategy Analytics forecasts a 32% decline in Chinese shipments in the first quarter, to 60 million from roughly 89 million shipments a year earlier. Canalys, starting from a similar estimate for 2019, scythes its expectations down to 42.5 million shipments.

Hon Hai’s lower 2020 sales growth outlook of 1% to 3% vs. 3% to 5% just a week ago likely reflects the severity of disruption to its operations from the coronavirus outbreak, in our view. The NT$111 billion ($3.68 billion) reduction in sales at the midpoint of the range vs. the prior midpoint is equivalent to one week of revenue, accounting for the extended factory shutdown imposed by the Chinese government.