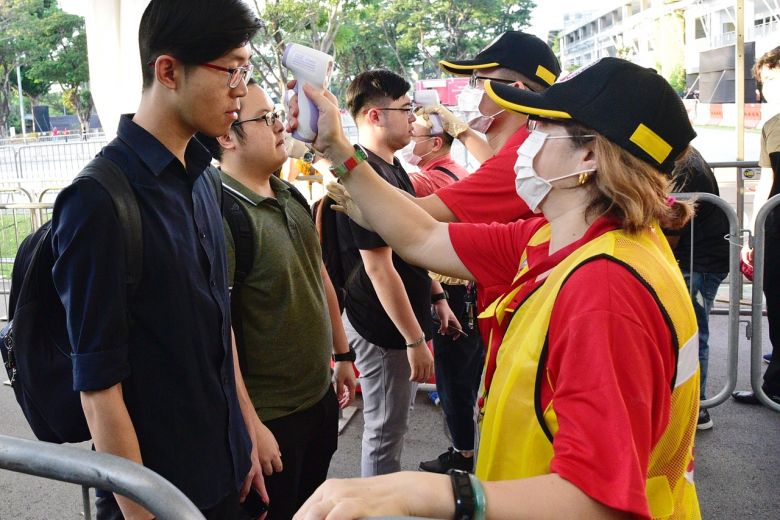 (Straits Times) – Singapore moved its disease outbreak response up a level to Orange on Friday as the coronavirus spread further within the country, with three new cases announced of unknown origin, including a junior college teacher.

To date, four people in Singapore have been infected with the virus who have no known links to previous cases or travel history to China.

The emphasis will now be on "aggressively trying to stop or limit further spread," according to the Ministry of Health's (MOH) pandemic readiness and preparedness plan. Code Orange is one step below Red, which signifies an out-of-control pandemic.

"We have been preparing for this scenario and we are ready to manage this situation," said Health Minister Gan Kim Yong at a press conference. "The key is quick detection and managing the local spread."

The heightened response comes as the ministry announced three new cases on Friday — all are Singaporeans not linked to any earlier clusters, and who had not been to China recently.

- A 53-year-old man who was in Malaysia on three separate days in January;

- A 42-year-old woman, a teacher at Victoria Junior College;

The three new cases were discovered because hospitals here have started testing all pneumonia patients for the virus, MOH said.

The total number of people infected here has grown to 33.

Two of the patients have been discharged, but two are now in critical condition and in the intensive care unit, said MOH on Friday.

With Code Orange, new precautionary measures will be in place to minimize the risk of further virus transmission to the community.

These include schools cancelling all inter-school events and external activities till the end of the March holidays; companies implementing business contingency plans; limiting visits to pre-schools and eldercare services; and temperature screening in hospitals.

The government has been ramping up defensive measures since January, and has put in place various measures, including quarantine for close contacts of those found with the disease, as well as more stringent screening measures at hospitals.

Mr Gan pointed out that many of the measures in Orange are already in place, and are being stepped up.

During Friday's press conference National Development Minister Lawrence Wong pointed out that the mortality rate of the disease is much lower outside of Hubei.

"We are still doing our best to prevent broader community spread in Singapore," said Mr. Wong, co-chair of the multi-ministry task force tackling the outbreak.

Singapore moved to Code Orange during the H1N1 influenza outbreak in 2009.