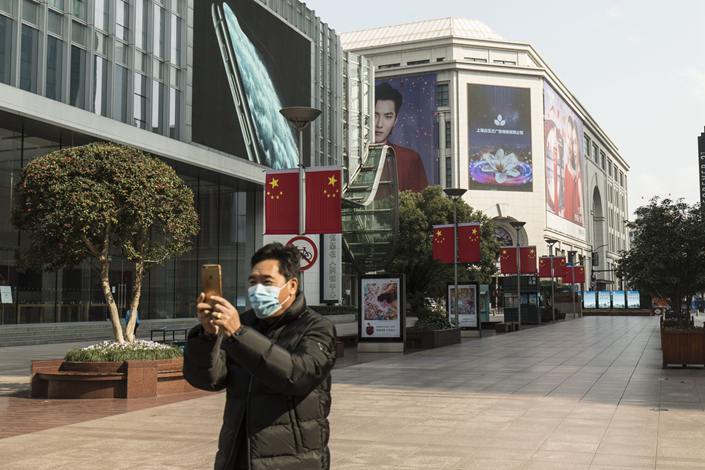 A man takes a pictures of an almost empty Nanjing Road in Shanghai on Feb. 5. Photo: Bloomberg

(Bloomberg) — China is no longer on track to dethrone the U.S. as the world’s No. 1 movie market this year.

The coronavirus has clobbered the burgeoning Hollywood rival, virtually wiping out ticket sales during the recent seven-day Lunar New Year holiday — a week that’s been historically the busiest for box-office collections. Theaters across the country have remained shut since Jan. 24, while the fear of infection has prompted people to avoid crowded places.

Losses from the collapse of ticket sales mounted to $1 billion during the festive period, according to estimates by Rance Pow, CEO of cinema industry consulting firm Artisan Gateway. That number is about 10% of the anticipated revenue in 2020, and is set to rise as uncertainty over the outbreak persists.

The impact of a virus that’s killed more than 600 people and slammed the local movie market is likely to spread to Hollywood, which is increasingly relying on Chinese audiences for growth as domestic ticket sales decline. Walt Disney Co. said this week that the epidemic is a headwind for its studio.

“The loss will do significant financial damage to both theaters and production companies in China, and if theaters remain closed for several more weeks, the financial harm will expand,” said Lindsay Conner, partner and leader of the entertainment consultancy of Los Angeles-based Manatt, Phelps & Phillips. “With Chinese theaters closed due to the outbreak, Hollywood’s plans for distributing new films in China are also uncertain.”

Exhibitors have said they have set no date for re-opening cinemas. That means potential delays in China for big-ticket films from Hollywood such as Disney’s “Mulan” — based on a legendary Chinese female warrior — and Pixar’s “Onward,” which are set for March debuts in the U.S., according to Pow.

For companies such as Disney, the hit is not just on the movie business. Its theme park in Shanghai has closed as well, along with Disneyland in Hong Kong, which had already been hit by the city’s political unrest. Executives at the Burbank, California-based entertainment giant said Tuesday the theme park shutdowns would pare about $175 million off revenue in the current quarter.

Local language movies set to open during the Lunar New Year holiday then canceled included “Detective Chinatown 3,” the third installment of one of China’s most commercially successful comedies, “Leap,” based on the true story of the Chinese women’s volleyball team, and “Jiang Ziya: Legend of Deification.”

“Even if the virus ended today, the backlog of films to release — all Chinese — is pretty large,” said Chris Fenton, a film producer and U.S.-Asia Institute trustee. A delay in the China release of “Mulan,” would also raise the question of whether Disney would postpone the U.S. release, he said.