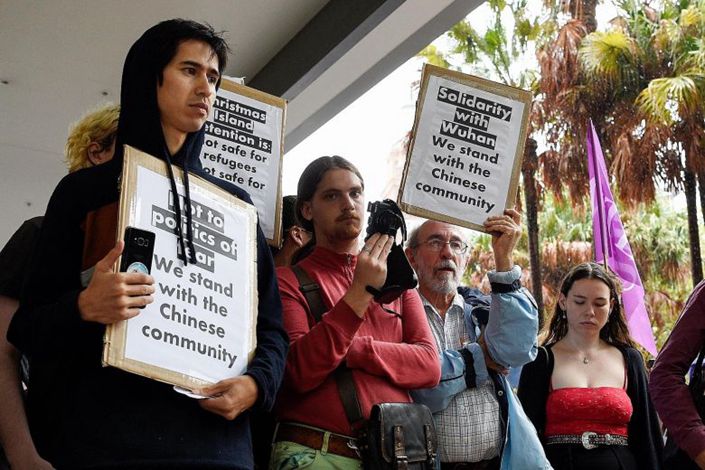 Protesters in Sydney hold placards outside Australia's Department of Immigration and Border Protection during a rally against an inbound travel ban on foreign travellers from China. PHOTO: EPA-EFE

Australian universities are heavily reliant on revenue from foreign students, particularly those from China.

The coronavirus outbreak prompted the federal government to ban visitors traveling from and through China just weeks before the new academic year was due to begin.

In the year to November 2019, Australia had 442,000 higher education enrollees, of which about 165,000 — or 37% — were from China. About 106,600 Chinese students due to attend Australian universities and other tertiary institutions have been unable to enter due to the ban.

The total hit to the economy, including lost fees and revenue from students at schools, colleges and universities, could be as much as A$8 billion ($5.3 billion) if Chinese students are unable to attend the first semester.

Universities have been offering deferred starts to students and working on giving refunds and ensuring that accommodation providers keep spots for students in case they can eventually travel.

The chief executive of the International Education Association of Australia, Phil Honeywood, is chairing a task force that was originally convened to help the international education sector grapple with the impact of the recent bush fires.

He said the coronavirus crisis is affecting not just new students but also those continuing their studies who had returned home for the Lunar New Year holidays last month.

“Australia’s long-term education sector reputation will be damaged or compromised if we are too strict on refund and course deferral fee charges,” he told The Sydney Morning Herald. “We will be trying to gain consensus around fees and charges protocols.”

Australia’s largest university, Monash University, which has about 80,000 students, delayed the start of the academic year by a week to March 9 and plans to hold online classes only for a further week before proceeding with normal classes.

The university said this was to protect the safety of students and staff, and to ensure that Chinese students were not excluded from classes.

Other universities are allowing late enrollments or deferrals, or have offered fee refunds.

Students in China have called on universities to delay start times and have expressed concern about whether to pay their tuition fees and rent.

Jessica Xu, 22, a student at the University of Melbourne who remains in lockdown in Wuhan, is concerned that she will not be able to travel until next month and will have to delay the resumption of her agricultural science degree studies until next year.

In the meantime, she said, she is worried she will have to pay A$1,500 a month for the apartment she rents.

“I feel so worried about the situation,” she told The Age. “Studying abroad is not cheap, right, so I’m just afraid I cannot study in Australia this year.”

The travel ban saw about 80 Chinese university students being stopped by the authorities at Australian airports last weekend.

Members of the group were reportedly detained and questioned for hours, even though some reportedly had departed from China before the travel ban was announced.

Most of the group were later released, but some were put into serviced apartments while they were being assessed, while others decided to return home.

Universities Australia, a peak body for Australian universities, criticized the treatment of the students, calling for an apology from the federal government.

“This is not the way to treat people who are coming here in absolute good faith,” the organization’s chief executive, Catriona Jackson, told ABC News. “These people are distressed; they are coming from a country that has a really serious epidemic on its hands.”

The coronavirus outbreak has killed more than 800 people in China, which is Australia’s top trading partner. The tourist market from China is also significant, generating around A$20 billion annually for Australia.

The Chinese embassy in Canberra expressed anger at Australia’s sudden shutdown of its borders and the impact on students.

"We are very concerned about the interests of the Chinese students who will not be able to come to Australia over the next 12 days," the embassy’s deputy head of mission, Wang Xining, told reporters on Tuesday. “We hope their rights and interests will be safeguarded, including proper expansion of visas and also maybe proper compensation for some of the financial losses during this period.”

“My officers on the ground acted absolutely professionally and diligently,” he told ABC News on Sunday. “We do act with compassion.”

The federal government has indicated that it expects to extend the 14-day China travel ban, which was imposed on Feb 1.