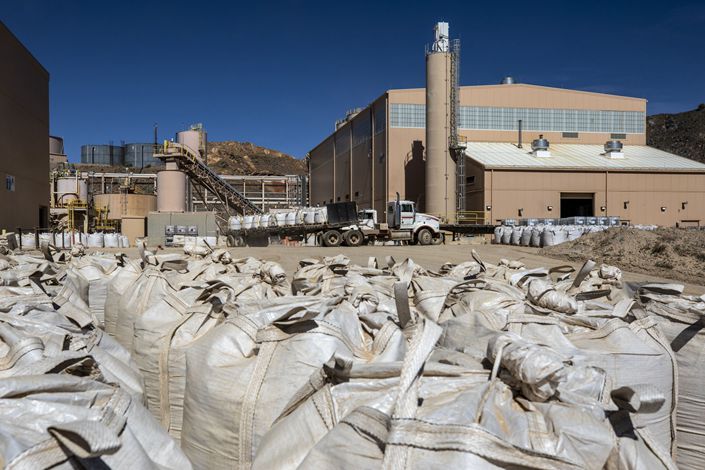 Packaged rare earth concentrate is ready for transport at a processing facility at the Mountain Pass mine,, California, on June 7, 2019. Photo: Bloomberg

(Bloomberg) — The U.S. is deploying drones and other technology as it scours for potential rare-earths reserves at home and abroad to wean the nation off its dependence on Chinese imports.

“We’ve been almost 100% dependent on foreign sources of rare earth elements for industrial applications,” Jim Reilly, director of the U.S. Geological Survey, said. “It’s not only the domestic sources of the resource that we concentrate on. We look for those resources literally across the globe, and then we build collaboration with our partners.”

China supplied about 80% of U.S. imports of the minerals used to make missiles, cellphones and wind turbines in the three years ended 2018. That leaves American companies that use rare earths vulnerable to supply shocks as a coronavirus outbreak in the Asian nation disrupts deliveries.

At the height of the trade war between Beijing and Washington, concerns were raised that China may weaponized the critical minerals, cutting supply to the U.S. While the signing of a phase-one deal eased tensions, the Trump administration remains determined to boost domestic output and seek alternative suppliers.

The U.S. is also in search of “friendly” sources of rare earths overseas that Washington could collaborate with in securing the material, Reilly said in an interview.

The Pentagon is looking for companies that can supply rare earths crucial to weapons systems. Last month, the Air Force Research Laboratory in Ohio called for proposals from firms showing they’re capable of stockpiling a six-month inventory of neodymium iron boron, which makes the world’s most powerful magnets and is used in the Javelin anti-tank missile, Bloomberg Government reported.

In 2019, U.S. rare earth production climbed 44% to 26,000 metric tons from a year earlier, the USGS said in a report Thursday. The entire output was shipped overseas for processing, according to the agency.

Consumption rose 12% to 13,000 tons last year, all of which was met by imports, according to USGS.