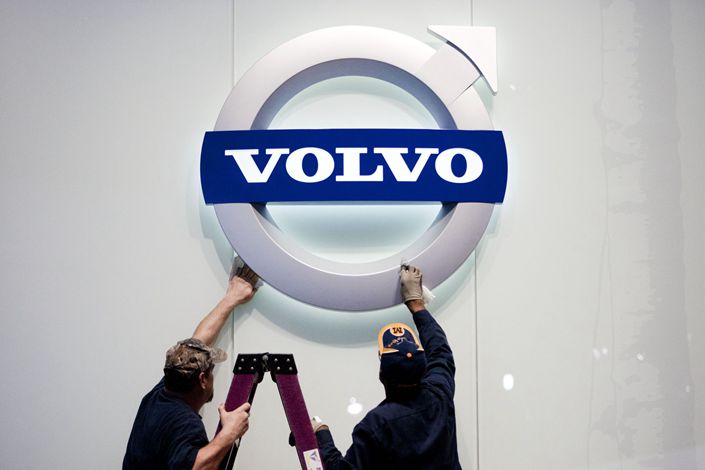 Mike Tropf, left, and Reggie White clean a Volvo AB sign prior to the 2012 North American International Auto Show at the Cobo Center in Detroit on Jan. 8. Photo: Bloomberg

The pair, both controlled by Li’s closely held Geely Group, have started discussions and the plan is for the combined entity to be listed in Hong Kong and Stockholm, according to a statement on Monday. Shares of Geely Automobile rose as much as 12%, the biggest intraday gain since April, and were up 6% at 11:51 a.m. local time.

The deal would unify the bulk of billionaire Li’s growing stable of automotive brands and create a company with annual revenue of more than $40 billion. Since the Chinese businessman bought Volvo Cars, the company has doubled sales while growing rapidly in China and becoming the biggest maker of Chinese brand cars. Li, who is also Daimler AG’s largest shareholder, has championed consolidation as a way for automakers to pool resources for initiatives like electrification and automated driving.

The deal is likely to be seen as heralding “the emergence of China’s first (only?) global carmaker,” Robin Zhu, an analyst at Sanford C. Bernstein in Hong Kong, said in a note to clients. “Fasten your seatbelts.”

Global dealmaking has picked up in the past year as Volkswagen AG and Ford Motor Co. agreed to cooperate and Fiat Chrysler Automobiles NV is to merge with France’s PSA Group, owner of the Peugeot brand.

A joint listing with Geely Automobile would mark a creative way to list Volvo Cars, which delayed plans for an IPO in 2018, citing the impact of trade tensions on market appetite. The new structure could be in place by the end of the year, a Volvo spokesman said.

“Compared to Volvo’s IPO, such a proposal could ensure better alignment between Geely’s and Volvo’s interests,” Shi Ji, an analyst with Haitong International Securities Co. in Hong Kong, said in a note. “With such a merger, shareholders would vote for any collaboration as long as it benefits the overall business.”

Geely Automobile commands a current market value of about $17 billion, while Volvo targeted a range of $16 billion to $32 billion before it dropped its IPO plans, people familiar with the matter said at the time. Investors were only willing to pay between $12 billion and $18 billion, those people said.

Volvo was started in 1926 as a project within ball-bearing maker SKF AB, which wanted to show how useful its products could be in cars. The fledgling company was listed in Stockholm in 1935 before expanding to become a sprawling conglomerate that also made trucks and construction equipment, with stakes in pharmaceutical companies and breweries.

After a failed attempt at merging with France’s Renault SA, the Volvo group sold the car business to Ford in 1999 to focus on making trucks and buses. Geely took over the business from Ford in the wake of the financial crisis just over a decade later.

Geely, which has been the top-selling Chinese car brand for three consecutive years, has sought to move upmarket through closer cooperation with its Swedish sister company. The new entity would also comprise Lynk & Co., which makes cars using Volvo’s CMA platform, and Polestar, a joint-venture that aspires to take on Tesla Inc.’s Model 3 with its first all-electric model, announced last year.

The new company’s combined annual shipments would surpass 2 million, based on data from 2019, rivaling shipments of BMW-branded cars and potentially ranking the company as the fifth-biggest Chinese automaker by volume. Globally, the company would still rank outside the Top 10.

Under Geely, Volvo has seen a resurgence of the brand led by the popular SUV models, including the XC60 and XC90, that made up more than half of its sales last year. Deliveries in China have risen five-fold under Li’s ownership, and the company set up three assembly plants and an engine unit in the country.

Li also owns the London EV Company, famous for its taxis, holds a majority stake in Lotus Cars and bought a stake in the separate truck-making company, Volvo Group, in 2018.

The car companies have already moved toward integration in response to industry challenges. In October, Volvo Cars announced that it will form a joint venture with Geely for the development of traditional combustion engines that could be operational at the end of the year.